The UAE hotel industry has seen phenomenal growth over the past decade, with international operators opening properties at an incredible rate. However, as certain segments become increasingly saturated, how dynamic a market does it remains? Abi Millar hears from industry leaders, including Matthew Tripolone, vice-president for Middle East and Africa at IHG, about where the opportunities still lie.

Above all, the UAE has been known for the luxury segment. Think of a Dubai hotel and the image that comes to mind is one of private island retreats and palatial beachside resorts, infinity pools and Swarovski chandeliers. For many Western travellers, it’s an opportunity to experience top-of-the-range amenities at a significantly lower price point.

According to 2018 research by Arabian Travel Market, luxury properties increased threefold in the GCC in just 10 years (with 73% located in the UAE, and 95% operated by international hotel brands).

Over the years, the sector has received massive government support, with the region working to position itself as a world-leading tourist destination, often on a “more is more” marketing platform.

That said, there are a few snags in the story. Although the GCC hospitality market is still growing fast (rising from $22.9 billion in 2017 to a projected $32.5 billion in 2022), the luxury segment appears to be reaching a point of saturation.

With two major events in the pipeline – Dubai Expo 2020 and Qatar’s FIFA World Cup 2022 – we are seeing a wave of new hotel openings, raising concerns about empty rooms once those events are over. Already, the issue is playing on hoteliers’ minds. Last July, average daily room rates in Dubai slumped to their lowest levels since 2004, with RevPAR down by 8.8%.

Commenting at the time, Tim Cordon, regional vice-president for Radisson, said, “There’s a lot of talk about oversupply, and maybe we’ve opened too many hotels in too short an amount of time, but there is a clear strategy to drive tourism over the next few years. Dubai is still a strategic global location and there’s a lot to come after Expo 2020 as well.”

Evidently, the UAE hotel market has reached a tipping point, in which precipitous growth should no longer be taken for granted. Developers and operators will need to adjust their strategy accordingly.

“Historically, hotel demand and development in the UAE has been skewed towards the upper upscale and luxury segments,” acknowledges Matthew Tripolone, vice-president of development in the Middle East and Africa at IHG. “We are starting to see this trend change as the UAE promotes itself to a wider base of travellers and new markets, which has resulted in an upturn in demand for mid-market accommodation.”

While the UAE attracts travellers from all over the world (the top three source countries being India, Saudia Arabia and the UK), the demographic mix is changing. Many of the new visitors come from Russia and China, both of which recently introduced visa-on-arrival facilities for their citizens.

Given the relative scarcity of budget accommodation, this is an obvious gap in the market that developers are now looking to fill. In 2017, just 20% of Dubai’s hotel rooms were rated from one to three stars, compared to 43% in Paris.

“In recent years, we have seen the landscape of the sector expand with increasing demand for boutique and mid-scale hotels,” says Tripolone. “This is a direct result of expanding profiles of the travellers visiting the region. KSA National Vision 2030, and the ensuing government efforts around social and economic reform, have reinforced interest from investors in building quality, internationally branded accommodation.”

He says that IHG sees strong growth potential in the region. Currently, it has 23 hotels in the UAE across five established brands, along with 15 hotels in the pipeline. These include two new brands, voco and Hotel Indigo, which are being introduced to the region for the first time this year.

The upscale voco brand, which launched last year, will be making its UAE debut in March, at the rebranded Nassima Royal Hotel in Dubai. Hotel Indigo, a boutique mid-market brand, will add to its 100 properties worldwide with a hotel in Dubai downtown.

“There is strong interest in lifestyle and design-led brands that provide guests with unique experiences, underpinned by solid fundamental service,” says Tripolone. “IHG’s Holiday Inn and Holiday Inn Express brands also continue to generate interest with developers and owners, due to their global guest appeal and proven capability to retain market share in this important growth segment.”

IHG is not the only operator to turn the focus away from luxury. Marriott too has impressive growth projections for the region, and is aiming for 80 UAE properties by 2023. As part of its expansion plans, it is targeting a number of market segments, with its Aloft and Element brands making their debut in Dubai last year.

AccorHotels, which has a strong luxury portfolio in the region, is also growing its presence in the lifestyle segment, with its Mama Shelter and 25hours brands slated to open hotels in Dubai.

Emaar Hospitality has created Rove Hotels, a contemporary mid-market brand for the millennial traveller that markets itself as a ‘Dubai-born-andbred global lifestyle brand’. Even Jumeirah, known for its ultra-luxury properties, has begun to court this demographic. Last year, it announced the launch of its upscale casual brand Zabeel House, which now has three properties in the UAE.

“Zabeel House by Jumeirah is for the traveller who wants to enjoy our award-winning hospitality but experience it in a more relaxed and casual setting,” said Jumeirah Group COO Marc Dardenne, in a statement.

Speaking at last year’s annual Great GM Debate in Dubai, Laurent Volvenel, of Swiss-Belhotel International, made the point that more needs to be done to encourage investment in this sector. He said that, while mid-market hotels have a lower cost of construction and faster return on investment, growth has been somewhat stymied by a lack of financial support.

“A typical plot of land can accommodate 30–35% more mid-scale rooms than luxury or upscale rooms,” he said. “There needs to be some sort of intervention from the authorities regarding land allocation, because in areas where mid-market hotels should be to attract investors, the cost of land is prohibitively high.”

That said, the UAE Government is certainly not blind to these needs. It has launched a number of initiatives designed to boost tourism, and has placed a particular focus on infrastructure development. Under the Dubai Tourism Vision 2020, the emirate hopes to attract 20 million visitors per year.

“This translates into a world of opportunities for the hospitality sector, as there will be a high demand for quality accommodation in the coming years,” says Tripolone. “We are encouraged by these developments and are focused on accelerating our growth in the country.”

He adds that, while the bulk of demand will be driven by Dubai and Abu Dhabi, there will also be opportunities elsewhere in the UAE.

“We are seeing growing demand for alternate destinations, such as the Fujairah and Ras Al Khaimah,” he says. “To cater to this demand, we have a new InterContinental Resort in Fujairah, which has gained popularity with domestic and international travellers, and an upcoming InterContinental resort in Ras Al Khaimah. These markets are growing in appeal with a promise of providing unique local experiences in a relaxed environment with great beaches and outdoor activities.”

Within the Middle East more broadly, the UAE and Kingdom of Saudi Arabia will remain the big hitters for the hospitality industry, although cities like Amman and Muscat are also attracting more international hotel brands. Qatar too is looking to redress the supply balance. Long dominated by luxury properties, it is likely to see stirrings in the mid-market ahead of the FIFA World Cup.

“Historically, hotel demand and development in the UAE has been skewed towards the upper upscale and luxury segments. We are starting to see this trend change as the UAE promotes itself to a wider base of travellers.”

“In countries such as Oman and Egypt, we are seeing growing interest in lifestyle products, in particular for larger mixed-use developments. We hope to have some exciting new announcements to make shortly,” says Tripolone.

The market, then, remains a dynamic and interesting one, even if the straightforward growth story of the past decade has started to seem more nuanced. Over the years to come, there is great scope for operators to attract a more budget-conscious traveller.

As for the luxury market, Tripolone thinks reports of its demise have been greatly exaggerated.

“The hospitality industry in the region is going through a period of supply expansion that has put a temporary strain on the market,” he says. “However, in the long term, we expect the market will do well, with strong, sustained growth with the anticipated increase in the number of tourist arrivals. There will continue to be demand for new upscale and luxury hotels, as well as lifestyle brands.” 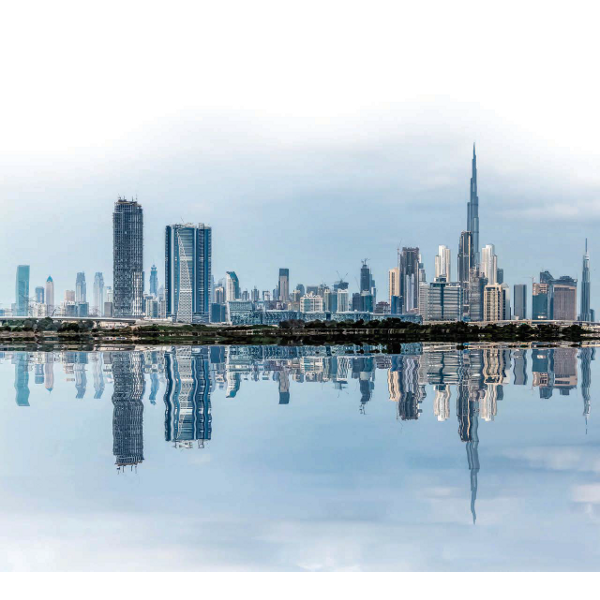 The ultra-modern skyline of Dubai, a city that in recent years has tended towards upscale and luxury developments. 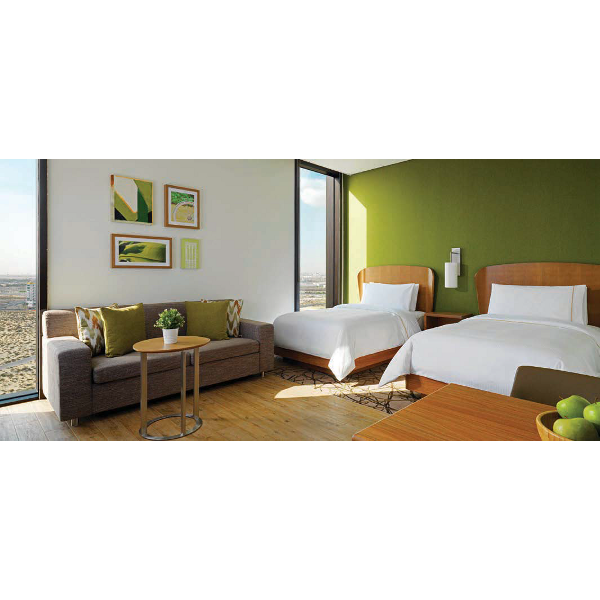 One of the 168 ecofriendly studios and suites in the Element Me’aisam, Dubai.
Post to: