Green roots: sustainability at the heart of Scandic

Since the early ’90s, Scandic Hotels has been famed for its environmental credentials, embedding responsible behaviour across its corporate culture and developing what many now agree is the industry’s leading sustainability programme. Tom Vaughan meets president and CEO Anders Ehrling to discuss the impetus for constant self-improvement, and setting standards for others to follow.

"It's not a PR stunt," says Scandic Hotels president and CEO Anders Ehrling in a calm and studious voice. "It's something that we do as an integral part of the business; it's in our DNA."

The initial thoughts are throwaway - no one in their right mind would assume that the Scandinavian hotel chain's famous environmental credentials are there to grab headlines - and what's more, were it a PR stunt, it would have been one of the longest in the hospitality industry's history.

Because, amazingly, 2014 will mark the 20th anniversary of the company's sustainability programme. In an industry that has been hurriedly grappling with a green makeover during this last decade, Scandic has been well ahead of the curve.

If the environmental movement had epochs, it would be safe to say that the early 90s existed in the equivalent of the Stone Age, particularly among hospitality professionals. Back then, sustainability was about as pressing an issue among hoteliers as Y2K proofing and it would be at least another ten years before environmental considerations began to spread through the industry in earnest, as companies started to realise that they couldn't be so profligate forever.

While many hotels have quickly 'greenwashed' their operations over the last ten years, Scandic has been able to evolve into a slick, eco-conscious operation. And surely there have been major advantages as a result of this head start?

"My head of HR answered this question only recently by saying: 'It means we don't run sustainability projects, we run projects that are sustainable'," says Ehrling. "Let me put it this way: we don't try and distinguish projects that enhance our sustainability credentials. Instead, whatever we do, we ask ourselves: how can we do this in a sustainable and cost-efficient way? How do we make sure this is a long-term sustainable solution?"

Eco-consciousness: part of the fabric of the company

Ehrling's best example of this way of thinking being put into practice is the 160-strong hotel chain's typical bedroom.

"94% of what we have, or what we accommodate in a hotel room, can be recycled," he explains. "So when we choose material, we choose material that we know for a fact can be recycled. We do that because it's sustainable, but we also know that when we're going to renovate a room, all the things that we move out of a room will eventually end up somewhere and, in the long run, it makes perfect financial sense to take a sustainable approach to whatever we do."

"It began as a cost-efficiency programme - a way to save money - but it quickly developed into a sustainability programme and has been in place ever since."

Over the years, this means the company has been able to build excellent relationships with suppliers that understand its strict demands.

"All of our vendors have passed our requirements," continues Ehrling. "There are, of course, vendors who say: 'We
can't do that' or 'We're not interested', but then they're simply not suppliers to us. We also encourage them to come up with new ideas, asking them: 'What's the lifecycle of this particular product? Where was it originally sourced?'"

Since 1994, Scandic has worked with The Next Step, a non-profit environmental education organisation, helping it to identify the sustainability of its products.

"Take laundry, for example," says Ehrling. "We're currently running a big laundry project and make sure we ask after the lifecycle of particular linens or blankets: 'Should we go for a higher quality? How many times can that typically be washed as opposed to something of lower quality?' And then we do a lifecycle study on that. Next, if it's cotton, we'll ask: 'Where was this cotton grown?'."

The difference this strategy makes to the bottom line of the company, which turned over €923 million last year, must be significant, but do its ecological credentials give it a competitive edge over other hotel groups?

"There's a long answer to this one, but the short answer is that corporate customers are more demanding than leisure customers," Ehrling replies. "We have to stay at the same price as our competitors, however; no customer today is willing to pay a premium for something that is defined as sustainable.

"80% of our hotels have received an Ecolabel [an EU accreditation of environmental friendliness]. Does that mean that those 80% can charge a premium? The answer is no, they can't, they have to compete in the marketplace just like everyone else. But does that in itself build preference for the brand? We think it does - we hope it does. When we ask clients what they think of our long tradition of sustainability, it is well received and appreciated."

The hotel group's sustainable approach is certainly embraced among its staff. Ehrling considers workforce engagement to be one of the most successful facets of Scandic's environmental programme.

"Everyone is more or less involved in the product development and procurement process," he says. "This in itself has made it possible to have a high share of Ecolabel hotels, which wouldn't have been possible without employee involvement. They are the ones taking care of it on a day-to-day basis. Whenever we open up a new hotel, sustainability is an integral part of the staff training conducted; it is integrated into the online training that all new team members go through. This is why I claim that it's in our DNA."

Despite any competitive edge it might offer - with guests and prospective employees - Ehrling says he would be more than happy to share environmental best practice with Scandic's competitors.

"It would be great to have someone else setting targets [as to how sustainable hotels should be]. I think that would drive real change in the industry," he declares.

"Sustainability is not on my agenda as a subject on its own. It is integrated into everything we do – it is considered in whichever business decision we take."

While 20 years might seem like a lifetime compared with the longevity of others' sustainability programmes, Scandic is constantly seeking to improve its own. There is no end point in sight.

"We're not taking giant steps here. Rather than improving one element 100% and then making the public believe we've made a major accomplishment, we prefer to work on a hundred different elements and improve them in incremental steps on a daily basis," he explains.

Take the breakfast, for instance. While other hotels are happy to serve butter in small packets, Scandic hasn't done so for 15 years, believing it to be wasteful. But eliminating waste does not just involve removing the most obvious offending items, and the company has recently readdressed its morning offering.

"We serve 8.5 million buffet breakfasts every year. The buffet has 101 items on it, which are identical across all of our 160 hotels. You can imagine the waste that's generated when we pack it away at 10.30am," he says.

"We wanted to improve that so we started by weighing the waste to understand how much we dispose of every morning. We then began to ask things like: 'If we served it this way instead or if we made the pan not as big as it is, can we serve it in smaller portions?' We set a target of reducing that waste by 40% and we managed it without compromising the guest experience in any way."

Improving building design and heat retention are also aspects that will be ongoing for decades to come, and the company is constantly trying to keep up with the newest green technologies.

"Buildings are certainly the biggest area that's still untapped," Ehrling says. "Each of our hotels is typically refurbished every 20 years and we do a soft refurbishment every ten years, but in between those intervals major achievements are made in the types of material available for use.

"We try to improve as we go along, but we have some buildings that were constructed many years ago and they are nowhere near as efficient as the new hotel we're building in Trondheim right now.

"That's because we're looking ahead - we're constructing it not with today's standards in mind, but with tomorrow's. The energy consumption per bed will be a quarter of the general portfolio we have today."

On account of the fact that Ehrling could seemingly talk for hours on Scandic's credentials, dishing out example after example of environmental practice - from negotiating with the group's television supplier about removing unnecessary packaging through to sourcing recyclable pods for its Nespresso machines - it's all the more remarkable that he does not deal directly with sustainability-related decisions. It really is part of the group's fundamental operational character - a result that has been 20 years in the making.

"It's not on my agenda as a subject on its own," reiterates Ehrling. "It is integrated into everything we do - it is considered in whichever business decision we take.

"I don't have sustainability meetings; we don't run eco-friendly projects. We simply involve it in whatever we do. It has become an integral part of our business: it is part of our DNA." 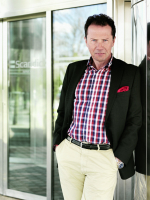 Scandic ensures every aspect of its business is inherently sustainable.
Post to: