Sustainability is now a serious consideration, with many operators placing environmental impact measurement at the very core of their business models. Natalie Healey talks to Kate Gibson, vice-president of corporate responsibility at InterContinental Hotels Group about the increasingly ambitious green targets groups are now setting in order to drive their businesses forward.

No longer a mere question of corporate social responsibility, hoteliers are increasingly stepping up sustainability targets, and measuring, verifying and managing their carbon footprint to give them an edge over competitors. Corporate clients now demand accurate data-driven reports regarding their stay and will go elsewhere if hotels do not meet their environmental expectations.

InterContinental Hotels Group (IHG) is a prominent example of a company that knows the value of moving swiftly on these issues, achieving substantial improvements in its Carbon Disclosure Project results in October. The group puts the accomplishment down to the increasing uptake of an online sustainability tool that has aided energy reduction across its global estate by 11.7%, exceeding its three-year target of 6-10%.

"In terms of environmental sustainability, hotels have a huge footprint," says Kate Gibson, vice-president of corporate responsibility at IHG. "What we know with regard to our business is that energy is the second-biggest cost after staff, so it's very important for the environment but also for business performance that we measure and manage our inputs extremely closely."

In her role, Gibson is in charge of the group's global community engagement programmes that, by focusing on environmental and societal impacts, aim to create more sustainable communities and better lives.

Groups like IHG generally execute their own branded sustainability schemes, but there's also scope for industry-wide collaboration for accurate accountability in emission measurement. In June, along with 22 other leading hotel brands, the company launched a global carbon standard to calculate and communicate the carbon footprint of hotel stays. Prior to this criterion, known as the Hotel Carbon Measurement Initiative (HCMI), each and every company calculated its emissions in a different way, leading to confusion from corporate customers looking to understand their own potential carbon footprint.

"A few years ago, just saying 'well, our hotels are very green' might have been enough, but now it's a very different dialogue."

"Before, it was a sort of apples and pears comparison," says Gibson. "But as a result of multiple years of working, there's now a consistent definition, and we are able to use that standard so guests can calculate the carbon footprint of a single stay in a hotel room."

Efforts towards the development of the HCMI highlight an increasing demand from customers, governments and regulators for high environmental standards and transparency in the hospitality industry. It's something operators like IHG have found themselves answering increasing detailed questions about in recent years.

"We've certainly recently seen a significant increase in the specificity of requests in terms of the carbon footprint of our hotels and what we're doing to manage and reduce that," says Gibson. "A few years ago, just saying 'well, our hotels are very green' might have been enough, but now it's a very different dialogue. Corporate clients in particular want a very data-driven response and authentic, robust action."

In order to reply to these requests in a more evidence-based way, IHG introduced an online environmental-responsibility tool, called IHG Green Engage, that calculates the carbon footprint of a night's stay at the press of a button. The concept for the tool, which now incorporates HCMI, came about when the company wanted to respond to questions from external stakeholders about what the group was doing to manage its environmental footprint. The system provides comprehensive reports that allow guests and corporate clients to review an individual hotel's sustainability progress. IHG hopes the majority of hotel owners within the group will enrol in the programme.

"Green Engage helps hotels around the world measure their energy, waste and water usage, by gathering information to understand how those inputs and costs are trending," explains Gibson. "It also allows them to benchmark their hotel's performance in those areas against similar hotels in similar climate zones, so you get a good sense of how you're doing on a relative basis and how much reduction potential you have."

In 2013, IHG turned its attention to making sure hotels use the scheme to the best of their ability. But it's not always easy to persuade every busy hotelier in the group's 4,600-strong portfolio to implement the same platform, especially when hotel managers may have their own ideas about sustainability and how best to achieve success, particularly when the tool comes with a monthly cost. In addition, the suggested solutions will often have significant associated costs. Despite the hurdles however, around half of the group's hotels are currently signed up to the system.

"The price tag associated with Green Engage may put some owners off, but it's actually very modest," says Gibson. "If you think of a hotel fully engaging with the tool, allowing it to save up to 25% of its energy costs, an average property could save $500,000. The tool pays back multiple times over, so I think when hoteliers see the savings other hotels have achieved, they will want to get involved."

With properties in more than 100 countries, it can be challenging to introduce a universal standard considering environmental legislation differs country by country. But Gibson believes it is less complicated than one might think to meet energy targets on an international scale.

"Obviously there are certain countries that have put regulations in place with regards to this space - an obvious example being the UK and its carbon-reduction commitment," she says. "So that is something that certainly drives an increase in focus, but we're observing quite a broad global scope. We have close to 100% of our hotels in the greater China region on Green Engage and are seeing an increased uptake everywhere, so it's a fairly global picture we're observing."

The tool has helped the group surpass the specific environmental objectives it set three years ago in regards to reducing energy per available room. IHG credits Green Engage as the primary driver behind its impressive CDP results this year, which saw the group gain an overall score of 85B in the Climate Change submission for 2013, a significant rise from its 54C score in 2010. Looking forward to 2017, the group's key targets are to reduce energy and water use per occupied room by a further 12% across its estate.

When there are targets to be met, it is vital general managers can get their employees on message. Hoteliers tend to offer comprehensive training to guide their staff through sustainability objectives and how they can best achieve them. But it turns out groups are increasingly seeing employees organically taking an interest in sustainability.

"We've increased our emphasis on employee engagement recently, and we've seen really positive results," says Gibson. "One thing we actually observe is that our employees want to know they are working for a family of brands that take environmental issues seriously and are taking genuine measures to make a positive difference. It's becoming a very important aspect of how people feel about their jobs."

"This year alone we've responded to 15 disasters in 11 countries around the world."

Carbon counts and ambitious energy reduction targets can seem fairly impersonal until you consider the growing costs emissions can confer on communities around the world. Some groups are also taking a broader, more human-focused approach to green thinking.

"We see sustainability in its widest sense," says Gibson. "In terms of environmental impacts and how thinking is evolving on those issues, but also because our business is intrinsically linked with the local community. We want to talk about creating sustainable communities and better lives as well as proactively measuring and reducing environmental impacts."

Extreme weather events are increasingly being observed around the globe, and it is likely this is a result of climate change. In order to try to combat as well as take steps to prevent the growing problem, IHG introduced its Shelter in a Storm programme, which allocates funds to local communities struck by natural disasters.

"This year alone, we've responded to 15 disasters in 11 countries around the world, ranging from the earthquake in Sichuan in April to the super-typhoon Haiyan that hit the Philippines in November," says Gibson.

"We certainly notice that when employees hear about how we've proactively helped colleagues and community members in times of disaster, they send us feedback about how proud they are to work for the company."

Positive employee pride and long-term contributions to communities are obviously laudable, but general managers need to know they are also driving their businesses forward. Sustainable solutions are associated with increased initial costs, so owners and managers often worry if they're a viable option for their businesses. But far from decreasing revenue, Gibson believes corporate responsibility and increasingly ambitious sustainability targets are now key to giving companies a competitive edge.

"A sustainability strategy is absolutely vital," says Gibson. "Now more than ever, stakeholders expect companies to behave in a responsible way, and we're showing clients and investors that we're very serious and taking robust action to manage our environmental footprint while making a positive difference in the community.

"The business angle is absolutely connected to social and environmental challenges," she concludes. 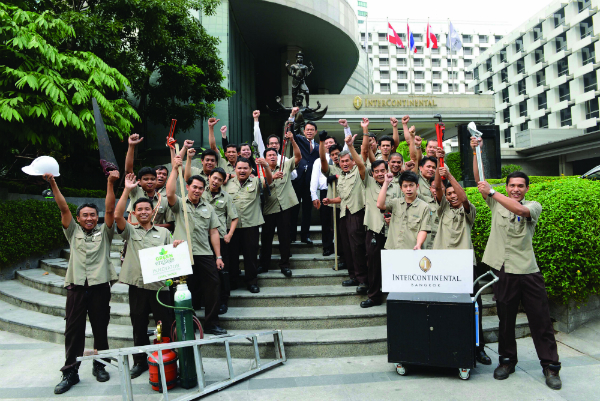 Employees in Auckland raise awareness of IHG’s programme that provides aid to victims of natural disasters.
Post to: