Diverse dining - the dining scene in the Middle East

The dining scene in the Middle East has never been more varied or competitive, making it crucial for food and beverage directors to outdo their rivals. Elly Earls speaks to three leaders in the region’s catering industry – Hilton Worldwide’s Simon Lazarus, Mövenpick’s Peter Drescher and Mark Patten from Atlantis, The Palm – to find out about prevalent trends and the secrets to maximising guests and external business.

Dining options in Middle Eastern hotels are vast, ranging from fine-dining establishments presided over by celebrity chefs, through retro-themed bars to live music venues. With competition growing fiercer in the region, those food and beverage directors wishing to remain relevant and successful need to adapt to the changes in the global dining scene and understand the evolution of customers’ expectations.

There is more to success than relying upon consistent, up-to-the-minute food and beverage offerings, such as partnerships with celebrity chefs and established brands, or a hotel’s fresh take on a trend from New York or Hong Kong. It’s also about how hotels market themselves internally and externally. Special events, personalised emails and social media promotions prove particularly effective for today’s diners.

In the past 15 years, the variety of drinking and dining options in the Middle East has risen rapidly. In 2001, Gordon Ramsay made his mark as the first celebrity chef in Dubai, with his Verre restaurant in Hilton Dubai Creek, which later closed in 2011. Fast forward to the present, and there are scores of international chefs in the area, including Ramsay, who is back on the scene with an addition to his Bread Street Kitchen brand at Atlantis, The Palm, in Dubai.

Meanwhile, Mövenpick’s Middle East portfolio features restaurants presided over by Michelin-starred chef Vineet Bhatia in Al Khobar and Riyadh, and three-Michelin-starred Pierre Gagnaire in Riyadh. At Atlantis, The Palm, the food and beverage offerings range from Ramsay’s latest venue to the new Arabic eatery Ayamna, which opened in March.

Competition no longer comes from hotel restaurants alone; a growing number of high-quality stand-alone concepts are also forcing food and beverage directors at hotels to hone their skills. “There is much more attention to detail on the dining scene,” says Peter Drescher, Mövenpick’s vice-president for food and beverage in the Middle East and Asia. He cites casual dining eatery Fume and Peruvian chicken restaurant Pollo Pollo as particularly impressive offers outside of hotels in Dubai. “We all need to pull our socks up because the freestanding restaurants are teaching us a lesson.”

To be the best, it’s absolutely crucial that food and beverage directors be up-to-date with dining trends from cities such as Hong Kong, London and New York, and be ready to implement them quickly.

“Generally speaking, if a concept has succeeded in New York or London, it is destined to do well here, all things being equal,” says Simon Lazarus, vice-president for food and beverage at Hilton Worldwide, Europe, Middle East and Africa. “To keep ahead of the game, my team and I travel extensively, and we have the tough job of going out to try new concepts in different cities all over the world.”

The team also spends time speaking to their Middle Eastern clientele to find out what they’ve been missing. “When we go out to create our own concepts or work with partners, we do a lot of internal surveys – some formal and some informal – asking, ‘What is it that you miss? What is it that you like?’,” Lazarus says. “Many of our decisions are built on what people are asking for, and what we perceive as a gap in the market.”

All of Hilton’s most innovative food and beverage concepts have stemmed from a combination of these two approaches. Angry Monkey, for example, was brought into the DoubleTree at Jumeirah Beach because the team saw that Dubai was missing a relaxed, live-music venue, and had also taken notice of the global trend of dining becoming less formal. “It’s very funny; a few years ago you’d go into a hotel and you’d never see a team member in jeans. Now there are jeans and plaid shirts and we even have bartenders with tattoos,” Lazarus says. “It’s about loosening up and appealing to what the new generation wants and what everybody’s come to accept.”

This is just one example of Hilton partnering with an established brand to appeal to the market in the Middle East. “From our standpoint, we’ve had a significant shift in the way our outlets are being operated,” says Lazarus. “We often work with partnerships or brands to bring in new, fresh and understandable concepts for people that travel, as most expats and locals here travel very extensively.”

It’s a similar story at Ramsay’s Bread Street Kitchen & Bar, Atlantis, The Palm, which opened late last year. “It gives residents, expats and tourists a reason to come to Atlantis over any other hotel. They know he’s a trusted name and the restaurant is going to be fantastic, based on his other outlets,” says Mark Patten, senior vice-president for food and beverage at the hotel.

“We’ve said goodbye to the trend of old hotel restaurants and are welcoming a range of new, exciting concepts with spaces being leased to individual chains. This is something that will take hold this year and we’ve seen a lot of last year.”

It’s a tough business to run a restaurant and fill them up, but one of the main things you can do to get a better capture ratio is to be consistent.

Hotels have to be a lot of different things to a lot of different people. “You cannot satisfy absolutely everybody with one concept,” Lazarus says. “As hoteliers, we at Hilton think that we’ve been stepping ahead of the game in trying out concepts that wouldn’t necessarily appeal to all. The thing is to ensure that when you’re doing that, there’s always an alternative that people can go to.”

Maximising revenue from in-house and external visitors to a hotel’s food and beverage outlets requires subtle, but constant marketing, which of course is easiest to achieve with hotel guests. Not only are there opportunities at the time of booking to explain the dining options to them, hotels can also send extra information with booking confirmations. Hilton, for example, partners with third party OpenTable, which means guests can click on a widget within their confirmation email to secure a reservation at any of the hotel’s restaurants.

“We also follow the entire guest journey; from the minute they check in we’re communicating the offering,” Lazarus says. “It’s that constant, subtle stream of offering options to our guests in the elevators, in the guest room, on the TV. You have to be very careful to strike that balance so that it’s not over the top, but letting people know what there is.”

Special offers and events tend to be particularly effective marketing tools at Hilton and Mövenpick. For example, Hilton’s winemaker dinners and special chef appearances have been popular. Mövenpick’s most successful special offers include Chocolate Hour, where hotels stage a small chocolate display in the lobby for an hour every afternoon, and Healthy Shots, where guests arrive at the hotel restaurant and are served a shot of a fresh fruit or vegetable juice.

Meanwhile, although the marketing message remains the same when it comes to attracting external customers, the means are different, with social media and direct mailing through established guest lists proving effective. Lazarus says of direct mailing: “That tends to work for external customers quite well because you can already tell what that person is looking for, so you avoid giving them multiple offers. We have to be very conscious that people receive many emails from many sources, so you need to know what that person likes to do and give the appropriate offer.”

The team at Atlantis, The Palm, has also capitalised on Dubai’s brunch culture to pull in external guests. “It really helps to expose diners to a restaurant’s cuisine, particularly with more casual dining environments that would not normally have the opportunity to show all that they can produce,” says Patten, adding that the Bread Street Kitchen’s brunch is a great example.

“In normal circumstances, some may feel they cannot afford a visit to a high-end restaurant, however, we want brunch to be affordable, coupled with the wide selection of cuisine and a drinks package, which creates a real sense of value for the guest. Once they are introduced to these types of outlets, they are always going to want to return and try more from the menu.”

Consistency is essential to maximise revenue from in-house and external guests. “It’s a tough business to run a restaurant and fill them up, but one of the main things you can do to get a better capture ratio is to be consistent,” Drescher says. “It always comes back to consistency, and not only in terms of the food, but also in terms of quality service and recognition of the customer. Everything fails if you’re not consistent.”

For Patten, one of the biggest changes that restaurants in Dubai will have to make is to ensure that their menus are healthy. “Diners have become extremely sophisticated and want the option to choose a variety of fresh, natural and locally sourced produce, which will lead to many establishments adapting their menus,” he says. “Last year saw a huge surge in residents adopting healthier lifestyles, while still maintaining the city trend to dine out multiple times in the week.”

Meanwhile, Lazarus has seen growing demand for breakfasts throughout the day. “There’s a fantastic new trend where people want eggs Benedict and omelettes at 9pm,” he says, adding that Bloody Marys are in, while gin and tonics are most definitely on the way out. “A few of our bars, MAINE in particular, do a fantastic Bloody Mary that is sometimes a meal. They come with shrimp, pickles and crab, so it’s a meal in a cocktail and that’s seeing great popularity.” 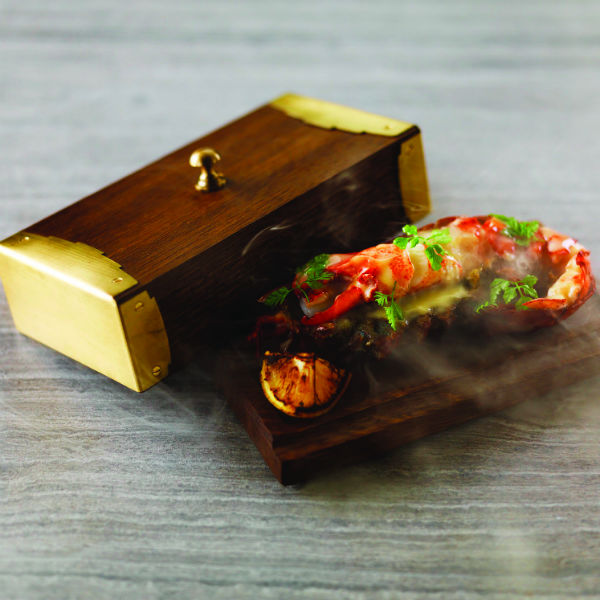 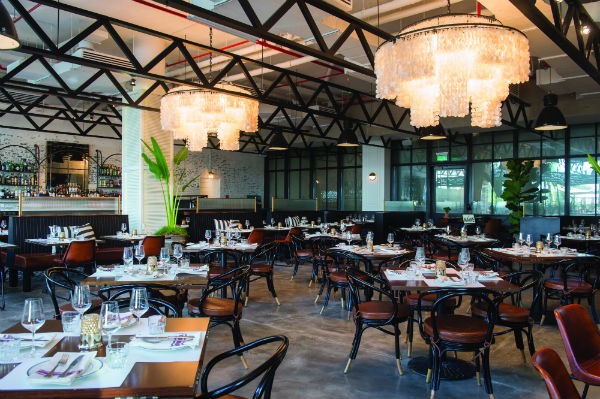