In the age of the global nomad, small lifestyle concepts and big global players are making moves to try and harness the potential of co-working within their portfolios, but what impact is that having upon the manner that public spaces are conceived and designed? Abi Millar speaks to the Rockwell Group’s Greg Keffer and Stephane Bensimon, CEO of WOJO, to find out.

For many years, the business hotel has conformed to a recognisable format. Place an ergonomic desk in each bedroom, add some meeting or conference rooms somewhere among the lower floors, ensure a healthy smattering of power outlets and fast Wi-Fi, and the average corporate traveller will walk away happy. Their business needs haven’t spurred much innovation.

Recently, though, that picture has begun to change. Step into, say, Hobo Hotel in Stockholm, Zoku in Amsterdam or The Hoxton in Southwark, London and you’ll notice a new take on business hospitality: designforward co-working spaces more redolent of a WeWork than a lobby. These spaces target not just business travellers, but also freelancers, start-ups and self-styled ‘digital nomads’ seeking a desk for the day.

At the newly opened Moxy East Village in New York, there is no formal lobby, but rather a multipurpose lounge. Created by US design company Rockwell Group, the space is intended for everyone – from tourists to business travellers to mobile workers. As Greg Keffer, partner at Rockwell Group, explains, the idea is that guests can find their own niche.

“We conceived the lobby, restaurant and amenities as a series of distinct experiences so that you can choose your own adventure,” says Keffer. “You can have a family dinner at Cathédrale restaurant, a lively night out with friends at Little Sister bar and lounge, catch up with a friend for a drink at Alphabet Bar, or quietly read or work in the adjacent lounge.”

As in Moxy’s other hotels, the spaces are geared towards co-working during the day, before becoming a party spot at night. The seating areas can be reconfigured to suit anyone’s work style, right down to the expandable conference tables. The line between work and play is lightly drawn.

“At Moxy East Village and Moxy Chelsea, we created lobby lounges with a variety of different seating types to enable guests to work solo or in groups,” says Keffer. “We also designed flexible meeting rooms that can transform from daytime conference rooms to lounge seating integrated with the night-time bar. The challenge was to design the rooms so that one person could easily transform them in five minutes.”

He adds that a new generation is pulling away from the isolation of traditional cubicle and home offices, and towards a greater sense of community and collaboration.

“Hotel brands like Moxy are starting to recognise that by creating public spaces that blend hospitality, residential design and workplace design, they can capture part of the co-working market,” he says. Stephane Bensimon, CEO of the co-working brand WOJO, agrees. He believes we’re witnessing a major shift in what he calls ‘workspitality’.

“I think we’re speaking to a strong behaviour change. We’re sure that many hotel owners are looking to include co-working in their hotel because they see there’s a real need to be answered,” he says.

There’s certainly a market to be tapped here. From a work culture standpoint, the rise of co-working has been one of the defining shifts of the 2010s, with the number of co-working spaces worldwide soaring from 2,150 in 2012 to 26,000 by 2020.

Out with the old

As the so-called ‘gig economy’ takes hold, fewer and fewer people are tethered to a traditional office. It is thought that five million people globally will be co-working by 2022 – most of them living in urban areas, close to the business hotels that wish to lure them.

Last year, the first WOJO Corner opened inside the Mercure Paris Montmatre Sacre-Coeur. The aesthetic is instantly recognisable to anyone who has ever been required to hot desk – clean white walls, pine desks and flooring, plastic chairs, filament bulbs, geometric prints. The word HELLO is printed on the ceiling in chartreuse, Lichtensteinstyle block capitals, while the two staples of a workspace – printer and coffee machine – are in clear view.

“Modern travellers value experience and community over brand consistency or even opulence, and I don’t think this trend will disappear anytime soon.”
Greg Keffer

“We help the hotel owners transform their space for co-working,” says Bensimon. “Our job is to give more than just advice – we create the space with them. That said, each hotel and brand has its own design book and it’s not a big deal if the design is different from one WOJO to the next.”

WOJO was acquired by Accor in 2017, in partnership with real-estate developers Bouygues Immobilier. Then called Nextdoor, it began to test out a range of spaces. Since becoming WOJO at the start of 2019 (a portmanteau of ‘work’ and ‘mojo’), its growth has begun to accelerate. The goal is to become the largest co-working brand in Europe by 2022.

“We want to create a real network – to cover a large geographical radius and provide solutions for many different types of worker,” says Bensimon. “This includes everyone from the nomad or even the student who wants to work for two hours in different places, to the company department that wants a fixed office for a year.”

Unusually for a co-working brand, WOJO will offer three distinct types of workspaces. WOJO Corners (100 sites projected by 2022) will be spaces that anyone can use, incorporating a number of private areas. While they will initially be built inside Accor hotels, eventually they’ll be launched inside railway stations, airports and shopping centres.

“We have a specific functionality that works for WOJO Corner,” says Bensimon. “You don’t see too many closed phone booths in hotels, but the idea is to create them here so people don’t need to bother their colleagues. We also want to design the space to encourage co-workers to interact.”

WOJO Sites (50 locations projected by 2022) will be stand-alone co-working spaces housed in dedicated buildings. Positioned somewhere between a living room and a workspace, they will feature bars, lounges, kitchen areas and offices for small companies. Meanwhile, WOJO Spots (1,000 spaces projected by 2022) can be incorporated into any Accor hotel with minimal upfront investment.

“It’s really just a label put in the hotel, to guarantee it has the minimum requirements you need for working,” says Bensimon. “That means Wi-Fi, a welcoming atmosphere, a good seat to work, an electricity plug and the capacity to have coffee or a meal. The majority of Accor hotels already have the capacity, but through organising that around an app we add value.”

5million
Number of people, globally, predicted to be co-working by 2022.
Emergent Research/GCUC

Catering for the new generation

While many hotels are approaching the co-working trend in a similar manner to a Starbucks – in short: getting people through your doors and charge them for coffee – others are monetising the trend more directly. Hotel Schani Wien in Vienna charges locals for a 10 or 30-day co-working pass, or lets them rent a fixed desk. Zoku in Amsterdam aims to cultivate an air of elitism, offering co-working memberships for ‘a curated collective of talented professionals’.

Since these are relatively new ventures, it’s hard to say how successful they’ll be – if you’re a MacBook-clutching freelancer, who previously used the space for free, you may resent being asked to pay for it.

Either way, the real beauty of co-working is that it brings a different demographic (whisper it – millennials and, increasingly, Gen Z) into your space. As Bensimon puts it: “It opens up the hotels to a new generation that would normally book an Airbnb.”

Even more traditional brands, not explicitly geared towards younger guests, are looking to move towards co-working. As part of Marriott’s overhaul of its Sheraton brand, the operator has said it’s exploring ‘the potential of co-working opportunities’. Reportedly, it is planning to revamp its lobbies to include long ‘community tables’ outfitted with USB ports.

“We wanted to be sure that our lobby spaces were really welcoming for people to come and work – not just for the guest who’s on the road, but also inviting locals to become a part of the community,” says Brittney Helper, a senior design manager at Marriott International.

By and large, though, it’s easy to see how ‘workspitality’ spaces cater to a millennial mindset. First and foremost they are tech-focused, and seamlessly so – offering super-fast Wi-Fi and wireless charging without needing to shout about it.

Finally, they at least try to provide some local colour. When designing Moxy East Village, the Rockwell Group paid homage to the rich, rock ‘n’ roll history of the area, with each of the 13 floors representing a different era in its timeline. Many of the chairs and desks are vintage found furniture. As a point of comparison, their design for Moxy Chelsea references art deco and Italian futurism.

“Modern travellers value experience and community over brand consistency or even opulence, and I don’t think this trend will disappear anytime soon,” says Keffer. “I think we will continue to see more boutique hotel and office mash-up spaces that feel engaging, relaxing, and conducive to different productivity styles as the freelance and remote workforce continue to grow.” 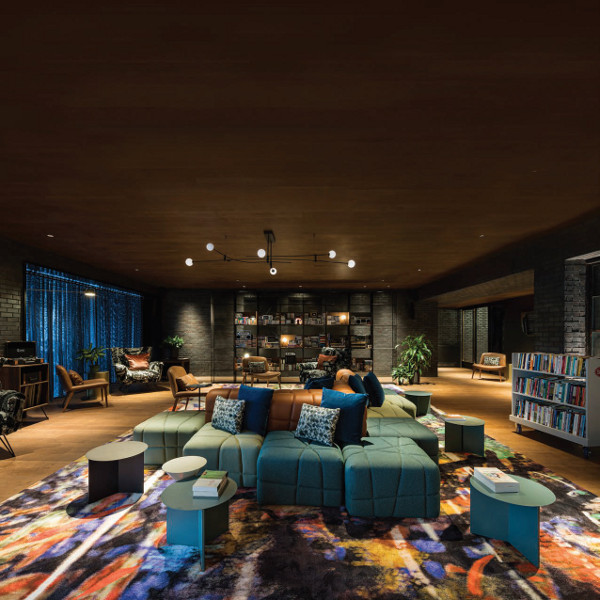 The Alphabet Bar & Cafe at Moxy East Village, is designed to shift from work to play – meeting every guest’s need. 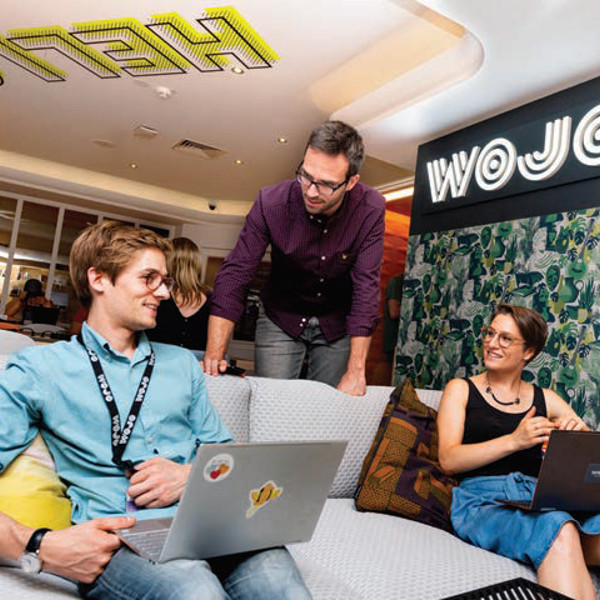 The first WOJO Corner inside Montmatre, fits the aesthetic instantly recognisable as a hot desk. 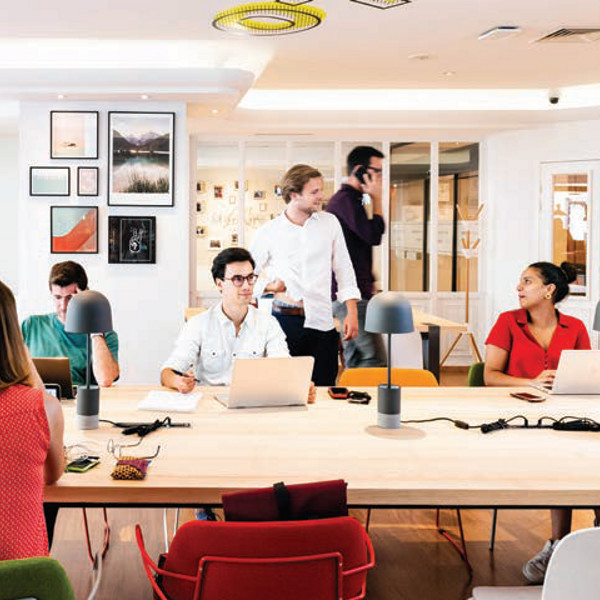