City stays for the self-starter

Having lagged behind the US for many years, Europe’s extended-stay space is finally starting to gather momentum. Ross Davies meets Eric Jafari, managing director of SACO; Zoku founder Hans Meyer; and Ascott’s chief operating officer, Kevin Goh, to fi nd out what’s accounting for this growth and how they are looking to get a piece of the action.

Even in the most accommodating of five-star properties, spending over a week in the same room can be something of an endurance test. But, whether it is for the purposes of leisure or business, the average duration of hotel stays is on the rise. According to some estimates, over a third of business travel stops across the world currently exceed five nights and can be classified as extended stays.

One might assume that the lion’s share of these trips are in the US, where serviced apartments have long enjoyed popularity among travellers. Yet, there are also signs that Europe is finally ready to embrace the extended-stay space.

According to London-based real-estate services provider Savills, the extended-stay transaction volumes in Europe reached €416.5 million in 2015 – up 32.9% year on year. This would suggest operators are starting to put their money where their mouths are and move into the sector.

But it’s still early days. Part of the reason Europe has been so late to the party is down to the past decade’s financial crisis and subsequent recession, which crushed any appetite for investment. The job for operators now is to ramp up awareness on the continent of what an extended stay actually entails for guests.

“Most Europeans have been unaware of extended stay as an option,” says Eric Jafari, managing director of SACO. “Unfortunately, prior to Airbnb, ‘aparthotels’ had negative connotations due to poor products in southern Spain. Airbnb has significantly raised awareness within the B2C segment that consumers can stay in an apartment for the same price as a hotel room.”

The lack of recognition, says Jafari – whose company currently offers over 80,000 serviced apartments worldwide – has resulted in minimal funding for European players compared with their US counterparts.

“Due to this lack of awareness, from an exit yield perspective, extended-stay products were institutionally priced as an inferior asset class to traditional hotels,” he explains.

“This meant not only that serviced apartments were sold at a lower price per square foot for comparable products, but also that they were more difficult and costly to finance – in contrast with the US, where serviced apartments are priced as a superior asset class [lower yield], as the volatility is lower.”

Look for a lifestyle

But the tide is turning, says Jafari, with European lenders and financial institutions becoming slowly more disposed to loosening the purse strings. This has buoyed operators like SACO. Last year, the UK group unveiled Locke, a new brand of lifestyle aparthotel geared towards UK and European city centres.

The group currently has more than 1,000 Locke units and hopes to double that figure by 2020. In June, the group opened the doors to Eden Locke, comprising 73 apartments in a fivestorey Victorian property in the heart of Edinburgh.

In conceiving the brand, SACO has sought to bundle together the concepts of lifestyle hotels – “Think Ace hotel in Hoxton, London,” says Jafari – with shared working spaces such as Wework and Airbnb.

“Locke aims to achieve this by incorporating these three ideas, and then creating each Locke to be unique in reflecting elements of the local fabric in its design, identity, and the careful selection of the respective food and beverage partner,” says Jafari.

For Zoku founder Hans Meyer, the trick to making the extended stay more appealing is creating a sense of community for guests.

While the traditional concept of the extended stay “was to focus on putting heads in bed, in properties often located outside the centre of the city”, Meyer says, the trick is making the aparthotel feel like a “second home – even on your first visit”.

The Dutch group, whose main offering is made up of home/office hybrid apartments and lofts – tailored to people inclined to call a city their home for anything from five days to three months – has sought to so do by creating a sense of homeliness, explains Meyer.

The secret is enabling people to connect with others, live comfortably and work efficiently, We give our residents the chance to personalise their lofts, and help them easily build up a local social life and professional network.

This is primarily based on engendering a sense of community where apartments are distinct from the self-containment found in hotel rooms, and guests are encouraged to get to know their neighbours. “Amazing things happen when people come together,” says the Zoku founder. “With the help of our community managers, guests’ local networks are kick-started. All Zoku residents can meet like-minded individuals.” Meyer identifies this target demographic as “global nomads” and is a hotelier with a track record for spotting new gaps in the market, having co-founded citizenM, a brand that has gone on to hugely influence the affordable-lifestyle segment.

The secret is enabling people to connect with others, live comfortably and work efficiently,” he says of Zoku. “We give our residents the chance to personalise their lofts, and help them easily build up a local social life and professional network.

The sensation of being home away from home can derive from the simplest of details; for instance, switching the focus from the bed – the centrepiece of most hotel rooms – to the living space.

“In most hotel rooms and studio apartments, the bed is the most prominent piece of furniture, which prevents guests from inviting people over for a small social gathering or a business meeting,” he says.

“We shift the focus of the room from the bed to the living space, with a fourperson table that can be used to work, dine, entertain or just hang out.”

According to Kevin Goh, chief operating officer at Ascott, operators should be looking to appeal to the millennial market, just as other hospitality sectors have done for some time. Such is the sway of the milennial generation. In 2016, Singaporeheadquartered Ascott launched a new brand, Lyf, under the strapline, ‘Designed for and managed by millennials’.

The service apartments are looked after by ‘Lyf Guards’ – who may be residents themselves, as well as community managers, city and food guides, and barkeepers.

Guards, guests and partners, explains Goh, are free to conduct workshops with local craftsmen, arrange hackathons with start-ups and host innovation talks. It’s a first for the industry, he says. “While there are many brands and products targeted at millennials, none have been designed from the ground up using data gathered from millennials and eventually being managed by millennials,” he says.

We believe that the 48-year-old executive working at Google London has more in common with the 24-year-old start-up app developer in San Francisco than the 24-year-old in Coventry does.

“It’s a first for the serviced residence industry. We have partnered with the Singapore Management University, which can translate data into actionable insights so that upcoming Lyf properties are tailormade for these target customers.”

SACO isn’t so zealous in the en-masse pursuit of millenials, says Jafari, specifically targeting “the modern urban traveller” instead.

“We believe that the 48-year-old executive working at Google London has more in common with the 24-year-old start-up app developer in San Francisco than the 24-year-old in Coventry does,” he says.

So what next for Europe’s extendedstay space? With an already saturated market at home, are more international operators set to enter the fray? Ascott, reveals Goh, is open to investment and management contracts to deliver the lyf brand to France, Germany and the UK in the near future.

Next year will also see the opening of La Clef Champs-Élysées Paris under The Crest Collection of unique luxury serviced residences.

It follows the 2016 acquisition of Citadines Islington London, which is scheduled to open in 2019.

“We see strong growth potential for serviced residences in Europe. It’s key to our global expansion,” says Goh. “We will continue to deepen our presence in gateway cities and explore new markets to achieve our target of 10,000 apartment units in Europe by 2020.”

US operators could look to capitalise, too, as indicated by the opening of Marriott’s debut Residence Inn – the extended-stay brand it first launched in 1975 – in London this July.

Other Residence Inns are set to follow in Amsterdam and Aberdeen by the end of the year.

Despite this, Jafari has reservations over whether stateside players will be able to monopolise the sector as much as they might like; not least due to US-European divergences over leasing.

“Many European institutions require fixed leases, as opposed to management contracts, especially in Germany and Scandinavia,” he says. “For this reason, many of the US extended-stay operators have been unable to compete with domestic hotel operators willing to offer leases.”

Time will tell how such hurdles may be cleared. The European extended-stay space is finally open for business, however, and is more than willing to do things a little differently. 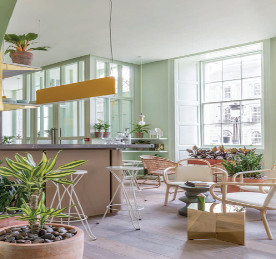