Anybody feeling bullish about the sustained growth prospects of the European hotel market is likely banking on a significant rise in Chinese visitors. As co-branding initiatives vie with complaints about etiquette, Isabel Ellis finds out about the unique challenges of attracting and catering to this emergent demographic.

Guests arriving at the Radisson Blu Frankfurt, a giant steel and glass Oreo just outside the city centre, might be surprised by what they see behind the front desk. The Radisson Blu branding is present and correct on the raw concrete, but so, in all their intricate roots and radicals, are four Chinese characters. For a European, usually so secure in the ubiquity of the Latin alphabet, it’s enough to make them stop and wonder just where they have ended up. Visitors that don’t either read Mandarin or make a point of asking for a translation won’t even know that it says ‘Jin Jiang Hotel’.

Shanghai-headquartered Jin Jiang acquired Radisson Hospitality in late 2018. The following June, the Radisson Blu Frankfurt became the newly partnered companies’ first co-branded property. It’s advertised under the Jin Jiang name in China and as a Radisson elsewhere, and, given the history of the hotel industry, it’s one of the more radical experiments in attracting new guests to Europe.

Hotels make tourism and business travel possible all over the world, but as an almost exclusively European and North American innovation, they also define what both of those things mean according to a very particular set of societal norms. Outside of those core Western markets, the hospitality industry is often less about hosts sharing their culture with visitors than about significant visitor segments imposing their expectations on the hosts.

That’s good business, and it’s not likely to change. The same can’t be said of guest demographics. Chinese travellers spent $277.3 billion over 149.7 million overseas trips in 2018. The former number is more than the second and third top-spending nationalities combined, and the latter figure is projected to reach 400 million by 2030. While Europe is currently the second most popular international destination for Chinese tourists after Asia, the continent’s hotel industry will need to adapt to their conception of hospitality to keep its growth on track; and it will need to convince its traditional customers that it’s not leaving them behind in the process.

That would be easier if the Chinese weren’t among the planet’s least-experienced and least-favourite tourists. In 2013, the same year they overtook their German and American counterparts as the biggest travel spenders, the Louvre installed its own Mandarinonly signage, gently reminding visitors not to defecate in public. Since then, the local train company at Mount Rigi in Switzerland has set aside specific services for the 50% of arrivals that hail from China, to, as the Swiss tabloid Blick reported, spare others their rudeness, toilet misuse and proclivity for spitting on the floor. Out of concern for the damage such behaviour is doing to the national image, the Chinese Government has even taken to banning particularly ill-behaved tourists from future travel abroad.

By the morning after they arrive, though, it seems most of the Radisson Blu’s guests are used to the hotel’s two faces. “You would be surprised how many non-Chinese travellers will get Chinese food for breakfast if you offer it at good quality,” says general manager Michael Goetz. “The co-branding is having a positive effect on the guest experience overall; not only for the Chinese guests but also for the Europeans, Americans and other international travellers who are starting to become very health conscious. They really appreciate the opportunity to have healthy Chinese food for breakfast and in the à la carte restaurant.”

In general, Chinese breakfast staples like congee – a versatile rice porridge – are yet to have their smashed avocado moment, but they certainly set the Radisson Blu apart from the rest of Frankfurt’s morning dining options. And the specially imported premium Chinese teas are appreciated for their own sake.

Beyond its signage and food and beverage offerings, though, Goetz doesn’t think that his hotel does too much to impose its co-branding on non-Chinese guests. “We’re not becoming a Chinese hotel,” he explains, “but we have floors and guest rooms which are completely equipped for Chinese travellers, where you will find basically all the collateral in Chinese.” That doesn’t include the fourth floor, which, due to the fact that the Chinese words for ‘four’ and ‘death’ are homonyms, can make for something of an inauspicious living and sleeping arrangement. Rooms containing the numbers six and eight, by contrast, are considered lucky.

Orchids are also prized, so long as they aren’t white. White flowers, like fourth floors, belong at funerals. A little more practically, minibars in the Radisson Blu’s Chinese rooms are stocked with Chinese beers, and room service menus are printed in Mandarin. VIP guests are even welcomed to their rooms with tea ceremonies.

“There are some things that are only done for Chinese guests,” Goetz continues, “but there’s a part where we have been able to bring this sense of Asian hospitality into the hotel.” Prior to starting in Frankfurt, Goetz was a general manager in Thailand, and it’s his belief that Asia’s hotels are generally better than Europe’s in terms of looking after guests.

As Roy Graff, EMEA managing director for Chinafocused travel marketing agency Dragon Trail, said on a company panel in April 2019, “The mistake is to think that in China they’re not used to luxury already. In Old World destinations, the service and hardware tend to be less luxurious than what they already have in China. We make the mistake of thinking: we know what luxury is, and, because they’re from China, they’re not used to it.”

Now, Goetz and his team are finding that many of the service concepts introduced in Frankfurt to help Asian guests feel comfortable are also appreciated by Europeans. It’s hardly a luxury touch, but he gives the example of serving warm towels after dinner. The teainfused VIP welcome is also proving popular, although China’s thousands of years of tea myth, legend and convention make it difficult to do properly without an expert on hand. Perhaps partly because of that, Goetz believes it creates a “wow moment” for guests from all over the world.

In order to deliver the service Chinese guests expect from an upscale Jin Jiang property, key members of Goetz’s team studied Mandarin and Chinese culture in Frankfurt before spending two months in Shanghai working in some of the company’s flagship properties.

“We had chefs going over there to learn about Chinese cooking – about the recipes, about the ingredients,” recalls Goetz. “We had guest contact employees who were taught how to welcome a Chinese guest with a tea ceremony, and what the protocol looks like for a Chinese VIP.” That’s a vital consideration in Frankfurt, which is the location of Germany’s Chinese Consulate-General, as well as the country’s biggest Chinese business presence. “They learned what it should look like when an ambassador or a CEO of a big Chinese company checks into the hotel, how to treat him and escort him to his room,” Goetz notes proudly.

Very few hotels are able to offer such a comprehensive training scheme; so, as the European hotel industry has begun to actively court Chinese travellers over the past decade, a slew of cheat sheets for negotiating cultural gaps have appeared online. Some information is well suited to this format, and doesn’t need too much further explanation to implement. As Yilmaz Yildirimlar, Radisson’s senior vice-president for central and southern Europe, points out, “Back in China, our Chinese guests are used to being able to pay with Unionpay and Alipay, which is a convenience they also expect when they travel”.

On the same Dragon Trail panel cited above, Ivy Aiwei Jenkins, director at Chinese-specialist service agency Hedera, pointed out that a lot of European hotels’ staff members are so preoccupied with cultural differences, language barriers and their own fear of doing things wrong that they actually avoid interacting with Chinese guests. That has the unintentional side effect of reinforcing staff’s own perception of the Chinese as cold, taciturn and hard to read. As she sees it, the typical attitude is, “They come to Europe once and they don’t come back, so I can’t be bothered to go the extra mile either”. The easier that is for guests to perceive, the more likely it is to prove true.

That’s not an issue in Goetz’s hotel. “It’s one thing as an international GM to train or tell your people something,” he says, “and another to have six of them from various guest contact departments who have experienced it, who have lived Asian hospitality, bring that knowledge back to the property and share it with the entire team to give the experience that a high-end Asian traveller would expect in a high-end hotel.”

By focusing on more experienced and cosmopolitan Chinese tourists, diplomats and business travellers, the Radisson Blu Frankfurt should be able to sidestep some of the worst issues associated with large Chinese tour groups. Similarly, by setting aside specific floors and rooms for Chinese guests, they can minimise issues that might arise when near-neighbours leave their doors open and talk to each other across rooms, or when someone tries to make their morning coffee using the kettle in which the previous occupant boiled their noodles.

“There are some things that are only done for Chinese guests, but there’s a part where we have been able to bring this sense of Asian hospitality into the hotel.”
Michael Goetz, Radisson Blu Frankfurt

Whereas Mount Rigi cast its net as wide as possible to attract Chinese tourists, twinning with the sacred Buddhist Mount Emei as part of a massive marketing campaign, Yildirimlar explains that Radisson and Jin Jiang are focusing on “up and coming destinations popular in China according to the desirability of the location and characteristics of the hotel for this market”. A Chinese-branded property in a sleepy alpine town is difficult to get right, but the pre-existing Chinese presence in Frankfurt means the Jin Jiang Radisson Blu is easily woven into the city’s fabric. Furthermore, by collaborating with the existing Chinese business and diplomatic presence, Radisson and Jin Jiang aim to corner the market among Chinese travellers best adapted to European norms.

Goetz believes those norms are all the better for it. “The atmosphere in the hotel is changing,” he says thoughtfully. “We do a lot more for our guests, and we understand them even better than we did before. It’s a very positive experience we’re living here.” 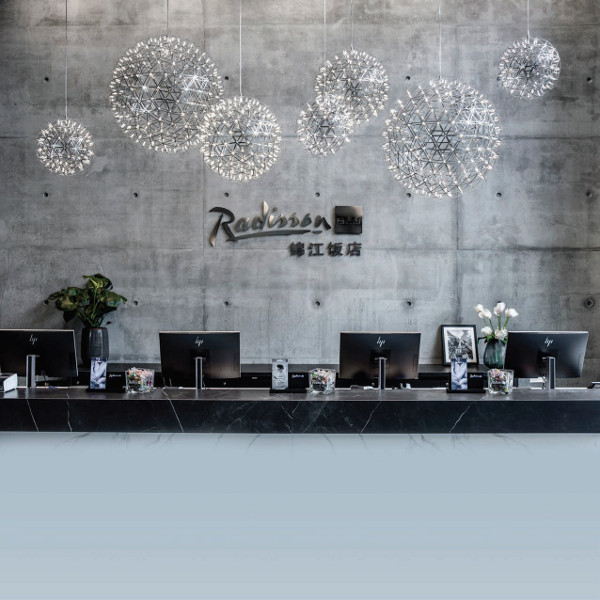 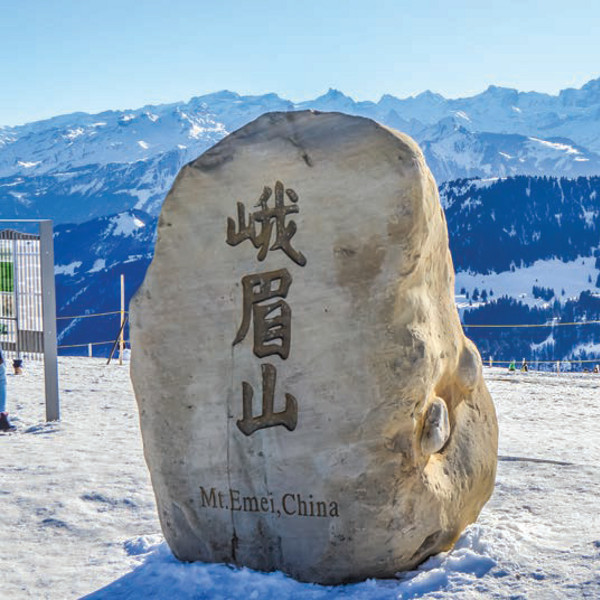 Mount Rigi’s twinning with Mount Emei has seen an increase in Chinese tourism to Switzerland.
Post to: