Bulli for you - Albert Adriá

In the wake of his first overseas project, Albert Adriá speaks to Tina Nielsen about being the creative force of elBulli, putting his name to more restaurants in Barcelona and the importance of expecting to fail.

Until recently, Albert Adriá was often described as “the best chef you have never heard of”. Such statements make good headlines, but they are no longer a true reflection of reality. Sure, if you are looking for the Spanish chef’s Wikipedia entry, you’ll still find the top result of a quick internet search is that of Adriá’s more famous older brother, Ferran, but Albert’s name has been in the ascendancy for some time now.

Although he spent more than 20 years working with his older brother at elBulli, Albert deliberately took a back seat – Ferran was the face of the much-lauded restaurant while the younger Adriá was the creative force, working in the background on innovative, boundary-breaking dishes. The two brothers – born seven years apart – were instrumental in the success of elBulli, voted the best in the world four times, but it was Ferran who collected most of the plaudits – not that being known as the brother of Ferran Adriá plays on Albert’s mind. “That doesn’t bother me,” he says. “It was partly my own fault that I ended up being in the background; I declined to become a proprietor alongside Ferran.”

Adriá says that taking a back seat and focusing on the development of the food in elBulli was deliberate – and vital. “In the same way, I have people working in the background now. When you are a creative, you need to dedicate yourself to that routine, and you need the calm to create; right now, I don’t have that time, so there are people doing that work in the background,” he says.

It is no wonder that there’s little time for creativity. Since leaving elBulli in 2009, Adriá has opened six venues in Barcelona and launched the wildly popular Heart in Ibiza last summer. We meet for this interview during his residency, 50 Days by Albert Adriá, at the Café Royal in London. To say he is busy is something of an understatement.

Industry connections brought Adriá to England’s capital for what has turned out to be a two-month stint at Café Royal, rather than the planned 50 days. “If London is the centre of the world, then Piccadilly Circus is the belly button,” he says, using a well-known Spanish phrase. “Café Royal, its 150-year history, the Domino dining room and the Oscar Wilde bar combined to make a very tempting proposition.” The short residency has allowed the chef and his ten-strong team from Barcelona to work with an intensity that has ensured the success of 50 Days – it sold out almost as soon as it was announced.

The launch followed three months of intense planning. Inevitably, the announcement brought references to elBulli and the highly technical food the brothers created. Is there a feeling that diners visit expecting elBulli-style food?

“I guess so, but those who do will be disappointed,” says Adriá. “I don’t like looking back, and I don’t want to do a bad copy of what we did at elBulli. I want to do a restaurant that is adapted to 2016 in London – there will be touches of elBulli, touches of Pakta [Adriá’s restaurant in Barcelona] and a touch of me.

The residency is going so well that he is already thinking about repeating it next year, but a permanent location outside Spain is out of the question.

“I couldn’t do that now. Success is found in intensity, and if I opened a permanent venue, the intensity would drop,” he says.

Having entered the profession at 15, he has spent 30 years in restaurant kitchens with just one break during what he refers to as his “crisis” in the mid-’90s. He didn’t think much about his career of choice before he joined his older brother in elBulli. “Things were easier then: you either liked studying or you went to work,” he explains.

It was a job he enjoyed, but it wasn’t until much later that he developed a love for his trade. “I liked the work and the lifestyle, but I didn’t have that passion for the trade then. When you are 20 years old things are very different,” he says. “You still want to be a footballer, and you still think one day you’ll win the lottery.”

Given that his restaurant empire spans tapas, Japanese, Peruvian and Mexican cuisine, some may be unaware that Adriá is first and foremost a pastry chef. Indeed, The World’s 50 Best Restaurants list currently ranked him the best pastry chef on the planet in 2015.

After joining elBulli, he worked his way around the kitchen but was attracted to the creativity of pastry. “I didn’t enjoy the fish section because I am allergic to shellfish, and I found the meat section boring,” he explains. “But in pastry, I learned that I had a blank canvas, and every day, I could do more; it was a three-dimensional world.” It also served to nip any hint of sibling rivalry in the bud. “I was comfortable because I had my world and Ferran had his. He was a cook and I was a pastry chef.”

Part of forging his own way included working abroad. During periods when elBulli was closed, Adriá travelled and worked in the kitchens of Michel Durand, Martín Berasategui and Charlie Trotter. “These experiences were such an important part of my development as a chef,” he says. In the mid-’90s, however, he suffered a crisis of identity and left everything behind to start a new job mussel fishing. “I felt a pressure of never having experienced anything else since I was 15, and it made me leave elBulli,” he says. In 1998 he published his book Los Postres de elBulli (‘The Desserts of elBulli’). If anything, the stint away from the kitchen made him appreciate the restaurant even more, and he returned with a real sense of purpose.

Since leaving elBulli, Adriá has been on a mission to create what he calls an “amusement park of dining experiences”. The tapas restaurant Tickets, probably the most famous of them all, opened in 2011. Later came Bodega 1900, Mexican restaurants Hoja Santa and Niño Viejo, and Pakta, which specialises in nikkei, a hybrid of Peruvian and Japanese cuisine. They are all within 500m of each other in a neighbourhood he calls “El Barri Adriá”.

“I don’t do things to be different, but you realise when looking back that we have done things differently: we were among the first to publish a book, I was one of the first pastry chefs to make the transition to cook and the first in creating a neighbourhood with many restaurants,” he explains. “Like all chefs, I am crazy about Japanese cuisine, but I wouldn’t dare open a Japanese restaurant. I love Peru, and I am totally fascinated by the Peruvian/Japanese combination, so that’s why I opened Pakta.”

He is equally enthusiastic about Mexican food, and launched his collaboration with a young Mexican chef after visiting the country more than 15 times.

He will soon add to his collection of restaurants when his first solo high-end establishment, Enigma, opens in Barcelona. This will take the number of employees to 200 and Adriá says it will be his last high-end project. He has been planning it for years. In fact, he knew as soon as he left elBulli that he would open his own high-end restaurant, and that its name would be Enigma. This is a venture that will launch with bold ambitions. “The intention is for Enigma to become a reference point,” he says.

Barceló is not only our brand; it’s the family name. That means change is never straightforward. Things often take time.

Last summer saw him launch Heart in Ibiza in collaboration with Ferran and the Cirque de Soleil. Describing it as a “true experience”, he says it is all about fiesta. “It’s a club, a disco, a party with food, performance and theatre all together. In Ibiza, people want to party more than they want to eat.”

Adriá knows how to create a success, so what’s the winning formula to getting a new restaurant off the ground? “First of all, open the restaurant expecting to fail,” he says. “Don’t think ‘How do I make this a success?’ but ‘How do we avoid failure?’.” He is keen to temper the message of his own success. “Our Mexican [project] has cost us a lot. Now, two years down the line, we are doing well, but we have lost money on it,” he says. “I don’t want to send out the message that everything is a success.”

It is tricky to square a name like Adriá, intrinsically linked with elBulli, with failure. However, after all the experiences and all the plaudits, what should people take from the immense success he achieved with his brother?

“When we started out, the working methods were very fixed: the recipe book was the most important, and things were done a certain way because that is how they had always been done,” he says. “I think elBulli can be remembered for changing that dynamic, for widening the recipe book, creating models to work as a team and valuing other professionals, like designers, in the process.”

With his restaurants thriving and Enigma earmarked for even greater success, Adriá’s name is one of the hottest on the global dining scene right now. Critics and clients alike cannot say enough positive things about his restaurants. However, the current environment of guides, rankings and lists leaves him ambivalent.

“The younger chefs put so much pressure on themselves because of all this new technology,” he says. “They look to the next chef and think ‘He has more stars than me’, ‘I only have 150,000 likes on Facebook’ or ‘Their TripAdvisor ranking is higher than mine’. They need to relax.” He admits, though, that the lists are always good when you are on top.

Adriá refuses to feel the pressure to repeat the success of elBulli. “We did it once, and I am going to fight to achieve it again – but not as an objective, just as a form of working,” he says. “We live in the present, with intensity and with passion, and that is what ultimately will bring you success.” 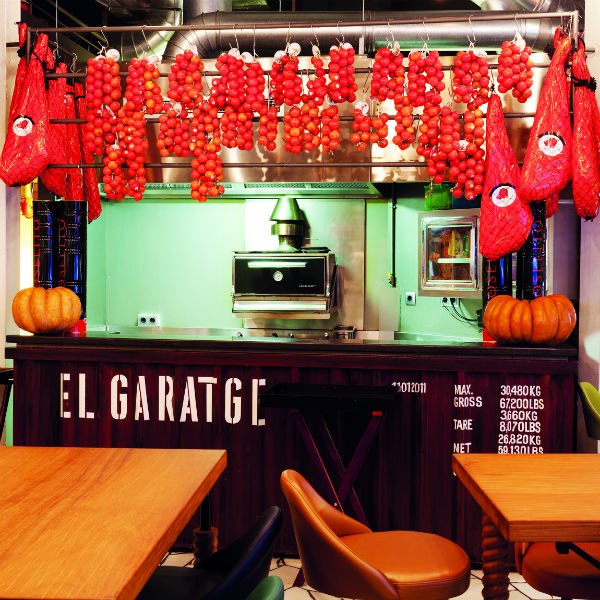 Tickets, Adriá’s tapas restaurant, is perhaps the most successful of all his ventures in ‘El Barri Adriá’ – although the soon-to-open Enigma may well supersede it.
Post to: