As Radisson Hotel Group (RHG) moves into the third year of its ambitious five-year plan, Elie Younes, executive vice-president and chief development officer, explains why market responsiveness is so important and why, for Younes and his team, hotel owners must be positioned at the very heart of everything they do.

Radisson Hotel Group (RHG) has had an eventful couple of years. With its five-year operating plan in full swing, the operator has been on a bid to reinvent itself. This has meant a better-defined brand architecture, a multimillion dollar technology investment and driving growth across its brands.

Formerly Carlson Rezidor Hotel Group, the operator rebranded to RHG in March 2018. Then, it stated it wanted to become “one of the top three hotel companies in the world” – the goal having less to do with size, and more with being ‘top of mind’. So when asked to think of a hotel operator, you’d be just as likely to think of Radisson as Marriott or Hilton.

As well as expanding across key gateway cities, the operator has parted ways with a number of underperforming hotels and worked to raise and align standards elsewhere, investing in renovations almost close to half a billion euros. It has also begun to unlock the lucrative Chinese market. Following its majority acquisition by Jin Jiang last November, RHG identified several opportunities to attract Chinese travellers. For example, the first co-branded hotel, Radisson Blu in Frankfurt, which launched in June.

As Elie Younes, executive vice-president and chief development officer, explains, RHG wants to be known as a company that successfully drives value for owners.

“Our historical obsession with the guest – who is very important – is no longer sufficient to secure our future success,” he says. “An organisation needs to be aware that the business has two customers, the owner and the guest. Everything it does needs to be completely relevant to both stakeholders.”

In practice, this means looking well beyond the balance sheet. While operational efficiencies are essential, an operator won’t get very far unless it’s also nimble and responsive. “I think what makes us stand out from the crowd is our ability to convert a large portion of every dollar of revenue into profits,” says Younes. “But we also believe that the soft skills of an organisation are becoming increasingly important. The world is ever-more ambiguous, volatile and unpredictable – anything might happen.”

To date, RHG has more than 1,400 hotels in operation or under development worldwide. Rather than muddying the waters with 30 or 40 brands, RHG has just seven, each with its own distinct positioning. These are Radisson Collection, Radisson Blu, Park Plaza, Radisson RED, Radisson, Park Inn by Radisson, and Country Inn & Suites by Radisson.

“Two years ago we communicated a plan to expand our brand architecture across Radisson RED, Radisson and Radisson Collection, and our team has walked the talk by accelerating the growth of these brands,” explains Younes. “We have signed almost 100 hotels across these brands, which is a testament that the brands are relevant to the owners and guests.”

As the person tasked with leading RHG’s expansion, Younes has long shunned a rigid business model in favour of something more dynamic. RHG takes a dynamic ‘asset-right’ approach to signing deals, which means a mix of franchising agreements, management contracts, leases and other forms of hybrid deal.

More recently, the mix has included some lease agreements. A growing number of institutional investors, particularly in Europe, are looking to plough capital into hotels and require such a business model – which RHG caters for.

“The introduction of leases into our business model has made us more relevant to some investors that we couldn’t do business with before, simply because they need leases,” says Younes. “We believe in a healthy mix business model that can optimise the risk-adjusted return for the overall portfolio. That means you optimise your network with some leased hotels, some managed hotels and some franchised hotels, probably at a mix of around 20:40:40.

“We have noticed in some destinations in Europe that the brands have to be a little bit adjusted to respond to our market realities,” he says. “For example in Radisson and Radisson RED we’ve reduced the room sizes where necessary from 24m2 to 18–20m2. This doesn’t compromise the experience for the guests, but it makes sense from a real estate and investment perspective.”

As for the business model, the idea is to better align the goals of franchiser and franchisee. Having surveyed its top 50 European franchise owners, RHG has identified a few services that could be improved.

“We are increasingly willing to share the upside with the owners through different pricing mechanisms,” says Younes. “We want to align our interests with theirs and make our benefit contingent upon increasing the economic benefit of the whole hotel. We’ve also taken on board our industry partners’ feedback and adjusted our franchise value proposition.”

As a general rule, he says he’d be more willing to franchise brands further down the brandscape – Park Inn by Radisson, Radisson and to some extent Radisson RED – than the likes of Radisson Blu and Radisson Collection. This is simply a matter of being able to standardise and communicate the brand promise, which becomes more bespoke and harder to deliver at the higher end.

He adds that it’s imperative to pick trustworthy partners who have some experience in the space. Currently, over 60% of RHG’s development partners own more than one hotel. “We’re looking for someone who understands quality, who understands brands, who respects the brand value proposition and wants to deliver that to the guests,” says Younes. “The 60% figure speaks to the fact that owners trust us, and we would like certainly to see this moving upwards rather than downwards.”

“From an investment perspective Germany, the UK – to some extent Spain and France – will remain the most in-demand markets for investors,” he says. “There is an increased amount of capital moving towards the eastern side of Europe, as it’s becoming more expensive to invest in mature markets. In the Middle East there is a lot of oversupply, so that’ll maybe slow down from the investment flow; and we’ll probably see another good year in Africa. Overall if you look at the world statistics for travel, the expectation is for another 4% improvement in tourism next year.”

Younes is particularly optimistic about the scope for welcoming guests from China. In 2018, 150 million Chinese people travelled abroad and “we expect that there will be 350 million to travel oversees by 2025, and their awareness of Jin Jiang is very high”. Through developing synergies and initiatives with Jin Jiang, RHG wants to become the foremost brand in the minds of Chinese tourists.

“We’ll be seeing more and more owners joining our system,” Younes concludes. “Our company is slowly becoming more relevant to owners than other companies, and being part of that journey is extremely exciting. We’re looking forward to the evolution and continued successful execution of our plans.” 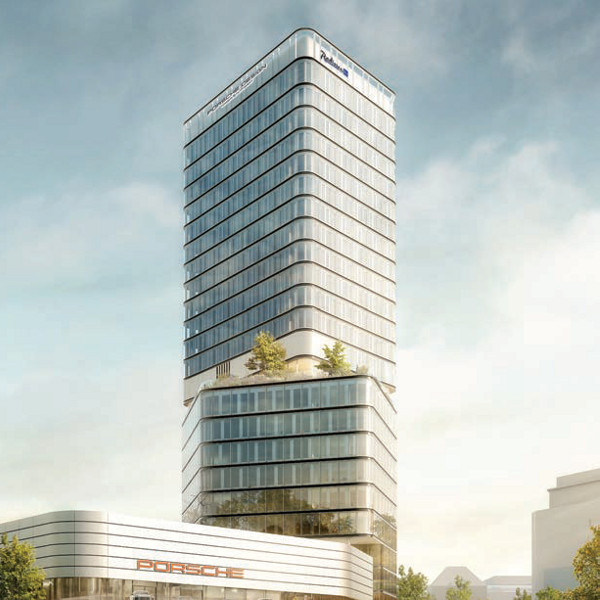 The Porsche Design Tower in Stuttgart is set to get a Radisson Blu Hotel.
Post to: