Behind the kitchen door

As hotel restaurants are changing, kitchens have to keep up. Andrea Valentino talks to Sascha Triemer, vice-president of food and beverage at Atlantis, The Palm in Dubai, and Frank Wagner, chair of FCSI Germany-Austria, about how a hotel kitchen is designed, how much influence chefs have over development and the importance of keeping on trend as restaurants change.

Sascha Triemer is a few minutes late to our interview, he explains, because he was busy putting the finishing touches on a party that evening. Not that he had simply popped back from the shops with a 12-pack of lager and some balloons. His DJ night at Atlantis, The Palm – the gargantuan Dubai complex where he serves as vice-president of food and beverage – was scheduled to welcome over 2,000 guests, up from just 700 last year. “It might get messy,” he smiles.

The same could be said for hotel catering in general. The old stereotypes of in-house restaurants, where customers were served either soggy pasta on chipped wooden tables or overpriced caviar by iron-backed waiters, have been shattered over the past few years. Many big hotel brands now go in for what Triemer calls ‘eatertainment’ – a frantic mix of settings and foods perfectly suited to restless sensibilities.

Not, of course, that managers can clap their hands and expect miracles overnight. On the contrary, for any hotel restaurant to be successful, it has to be supported by an equally efficient kitchen. That was hard enough when guests only expected the basics. But as palates have developed, kitchens have had to keep up.

Charged with overseeing 23 restaurants and cafés at Atlantis, The Palm, Triemer is in a particularly good position to reflect on what this all means in practice. “If you have a Mexican concept, or an Indian concept, or whatever it may be,” he explains, “you need to have the appropriate kitchen equipment there. In the Indian one, you need your tandoors and your range of flat tops to create the cuisine you need. If you have Chinese or Asian, you need to ensure that you have your woks.”

Frank Wagner, chair of FCSI Germany-Austria, makes a similar point, noting that equipment can even vary across regional restaurants from the same country. So Galician cooking – all thick stews and grilling – needs different equipment when compared with, say, Basque pintxos.

These cultural considerations matter in another way too. After all, opening a kitchen in Wagner’s native Germany, with its temperate climate and rapid supply chains, is a very different proposition to working in developing countries with less reliable infrastructure. In particular, Wagner points to projects he worked on across sub-Saharan Africa. Given the weather is so hot for much of the year, and local suppliers tend to struggle with the ‘just in time’ deliveries, kitchens need space to “not quite kill, but certainly butcher” an animal in time for dinner.

All the same, both Triemer and Wagner make it clear that, for all their quirks, hotel restaurants do share a common set of elements. As Wagner laconically puts it, “they all have to boil water”. This is especially true considering hotel chefs normally wear several uniforms over the course of a day. A kitchen might be devoted to curries or katsus after dark, but it may still have to cook room service, or whip up eggs benedict for breakfast. “Hotel kitchens are more flexible,” says Triemer. “They’re specifically designed with four or five sections, where everyone is working, for banqueting or room service.”

Everything and the kitchen sink

In 2015, Gordon Ramsay came to Atlantis. Promising ‘a slice of London’ in the Arabian Desert, the chef was characteristically bullish about his plans. “I need to come back with something new, fresh, vibrant,” Ramsay told The National. “I need to reinvent the wheel.” Certainly, his Bread Street Kitchen restaurant still offers guests earthy British classics like beef wellington and Cornish seafood stew. Yet when it came to the space where these dishes were made, even the superstar Ramsay had less influence than he might have expected. “It was an existing kitchen,” remembers Triemer. “So we had to go to the chefs and kitchen designers, and explain to them that there wasn’t much we could change.”

This experience raises broader points about how hotel kitchens are fundamentally designed. Speak to the experts after all, and there is the impression that, for all the dynamism of modern hotel restaurants, many chefs will end up like Ramsay: dictated to by the limitations of the space and the practicalities of the building.

As an example, Triemer highlights the challenges of developing an Asian restaurant in Atlantis. A row of stoves and ovens was originally meant to sit confidently at the front of the kitchen. But then Triemer and his colleagues noticed the power supply was on the far side of the space, meaning the plan had to be reversed, with the stoves ending up at the back. “The kitchen needs to be suitable,” Triemer explains, “but sometimes you have no choice other than working around it.” Wagner agrees, noting that putting equipment in the ‘wrong place’ can end up costing later. “It’s important for a kitchen designer to be involved in a hotel back-of-house design.”

Finances matter in another way too. As a chef with experience from the Dorchester to the Mandarin Oriental in Kuala Lumpur, Triemer knows that hotel restaurants live and die by the covers they entice, and it’s pointless wasting valuable seating space on an oven or a fridge, no matter how perfectly it might fit into the design aesthetic of the kitchen.

Even so, though Wagner estimates that 90% of hotel restaurants are built without any input from the men and women in white hats, there are some exceptions. They normally appear when hotel managers have ambitious plans for a restaurant – even grander than serving Yorkshire puddings with Gordon Ramsay branding. “The hotel chain cannot demand two Michelin stars from a chef tomorrow,” Wagner explains. “That’s impossible. They have to find the right ingredients, the right food, they have to use the right equipment.” To put it another way, when a Ducasse or a Bocuse comes along and shows interest in opening one of the best restaurants on earth in a hotel, kitchen designers are more willing to be flexible. Over his two decades on the job, Wagner has seen the top chefs’ demand everything from pricey sous vides to granite countertops – “they’re surprisingly organised”, he says.

Even when he isn’t planning for massive DJ events, Triemer is still a busy man. After all, much of his time is spent overseeing the delivery of the Royal Atlantis, another monumental complex of restaurants, apartments and hotel suites down the beach from Atlantis, The Palm. At the same time, he keeps a close eye on the array of kitchens. For if chefs might have little influence over how a hotel kitchen is originally designed, they can certainly be vocal about what needs changing to keep food production ticking over.

As Triemer puts it: “Change happens on a continuous basis.” Every year, he says, there is always one or two things that need replacing, and that could cover everything from simple blenders to enormous ovens. Either way, if a kitchen wants to improve its operations and ultimately save money, it needs to ‘stay on trend’. Wagner agrees, pointing out that, as technology improves, it makes sense to invest in more efficient equipment. This is especially true in developing countries like Kenya, where water is so expensive that spending a bit more up front for a modern dishwasher spares the wallet later.

“The hotel chain cannot demand two Michelin stars from a chef tomorrow. That’s impossible. They have to find the right ingredients, the right food, they have to use the right equipment.”
Frank Wagner

At the same time, both Wagner and Triemer emphasise the importance of keeping abreast of broader shifts in taste. A decade ago, Wagner remembers, elaborate steakhouses were all the rage in hotel restaurants. Everyone was desperate to show off slabs of beef in imposing glass ageing rooms. But as restaurants have pirouetted towards a more rugged, industrial style, these showy elements have gone the way of open kitchens and become less commonplace. To put it another way, then, the best kitchens need strong communication between chefs, managers and designers long after the new team has got settled. Anything else risks tugging the food back to negative stereotypes associated with hotel dining of the past, even if the atmosphere beyond the kitchen doors is rather more trendy. 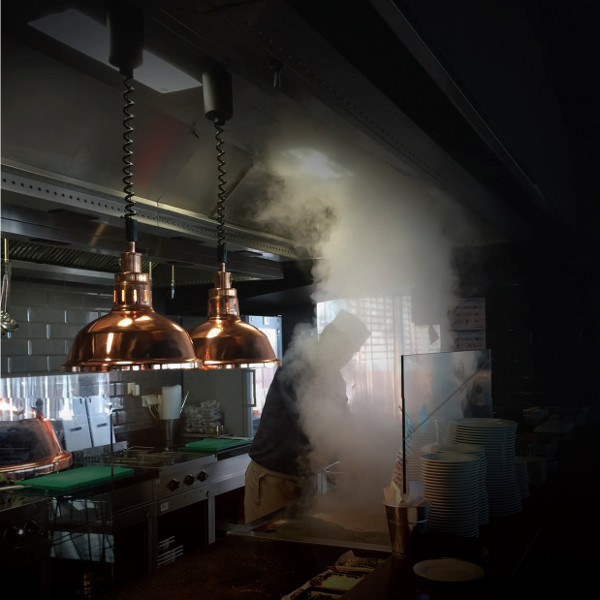 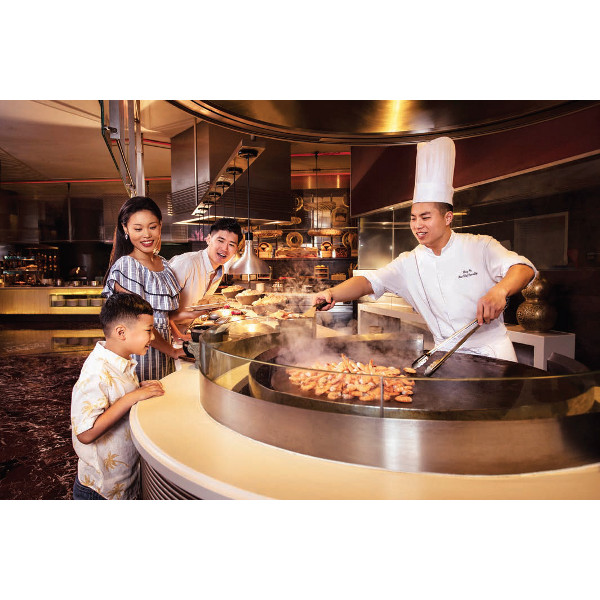 An open kitchen at one of the 23 restaurants at Atlantis, The Palm. 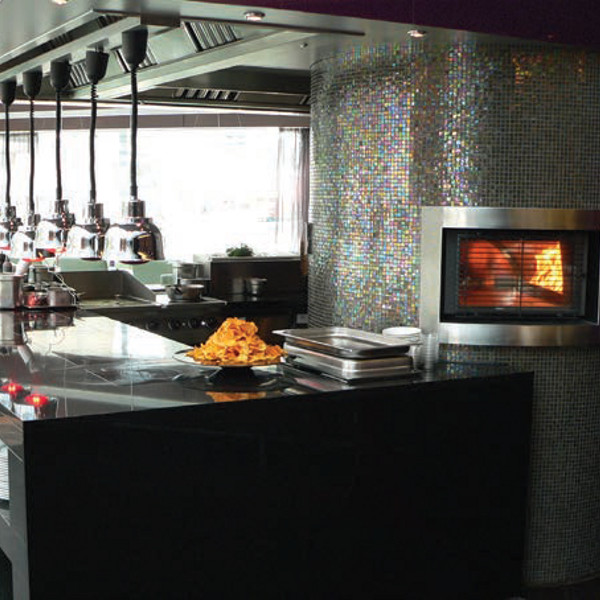