Are we there yet?

On 6 November, some of the biggest names in the European hotel scene gathered in London for Deloitte’s 31st European Hotel Industry Conference. Hotel Management International was in attendance to hear delegates debate exactly where we sit in the economic cycle and where opportunity for hotel developers in 2020 might lie.

It seemed somewhat appropriate that, following a long run of being hosted by the Dorchester, the 2019 iteration of the Deloitte European Hotel Industry Conference (EHIC) found a new home. After all, change was very much on the agenda.

Attending this annual November event over the past few years, the tone of proceedings has always skewed towards the bullish and optimistic. Last year marked a slight shift, with Deloitte’s Andreas Scriven telling the audience that he was increasingly being asked “are we there yet?”, with regard to the economic cycle; the general consensus from the stage in 2018 was best articulated as a resounding “no”.

Well, on 6 November 2019 delegates at the Biltmore Mayfair, LXR Hotels & Resorts’ debut European property, were given no such assurances. There was good news and bad, but, regardless of whether or not we are getting there, it might be a good idea to fasten the seatbelts.

Change was a theme of the event’s format itself, tweaked following consultation with attendees. All sessions were packed into a morning timetable, making for a heady, whirlwind tour of the European hotel landscape across an intensive five hours.

Scriven, Deloitte’s lead partner, hospitality and leisure, kicked off proceedings, introducing the changes to this year’s conference and also revealing the results of the 2019 Deloitte European Hotel Investment Survey. Amsterdam topped the list of desirable cities for hotel investment for the third year in a row, but Paris and London had swapped positions in the table, now standing in second and third respectively. People were also a lot less optimistic about where the economy’s direction was headed.

“In terms of where we are in the cycle, you think the UK and Ireland are played at the peak or post peak,” Scriven said. “Some other markets still have a little bit of runway left to go, especially around the Med.

“The UK is a big concern, where we have seen a 26% decrease in transaction volumes. There has been a lack of quality supply. Trading has come under pressure, cost pressures are still very real, and then of course, you have got the backdrop of Brexit, where it is hard to assess how much it is influencing investment decisions because it has been going on for so long.”

Next up on stage was Alexander Boersch, chief economist and head of research at Deloitte Germany, who discussed the array of challenges faced by the European economy. What he was keen to stress, however, was that individual markets within that block had shown marked differences in the decade or so since the global financial crisis and all faced slightly different dangers on the precipice of 2020, a somewhat surprising revelation being that, after Ireland, Germany stood to be the EU member worst hit by Brexit.

Boersch identified a skill and labour shortage as the biggest risk to the German market, however, as well as to the Austrian and Dutch economies, discussing the possibility of having to tap new labour pools at a time when migration has become a difficult political topic. Results from a recent survey revealed one answer.

“If you ask the over-50s whether they would like to work until 65, or even longer, two thirds of them are willing to do so,” Boersch said. “That is quite contrary to the public policy discussions about retirement that we are having in many European countries. It is really worth considering how to integrate these older generations in the workforce.”

One of the highlights of 2018 was a presentation from Deloitte’s global Brexit insight lead, Sally Jones, and she returned again to update delegates on the state of play – “I knew I would have a mutiny on my hands if we didn’t invite her back,” Scriven joked.

Sadly for those not in the room, the session was only possible on the agreement of Chatham House Rules, so everything discussed was off the record, but there were no such restrictions with Robin Rossmann, STR’s managing director, who was on hand to provide a hotel-centric perspective on performance and outlook across the continent.

Rossmann spoke about looking for “tipping points”, the state of the competitive landscape and, somewhat surprisingly, the growing role sustainability was playing in discussions around development and performance. Supply was now outpacing demand in regions around the world, he began, driving RevPAR declines. There was one big success story, however.

“You can see that there is some fabulous growth across Russia, and I think that still has a long way to go,” he revealed. “Look out for Moscow as one for the future, particularly because there isn’t currently much supply going in.”

Rossmann’s final, powerful point regarded how things might change in the future, as he cited his young daughter’s newfound environmental evangelism and how it had forced the family as a whole into major behavioural change.

“As operators and investors, it is so important to start thinking proactively around how changing consumer behaviour might impact the performance of hotels,” he said. “The new generation is thinking and behaving and judging differently. We must reflect those changes.”

Another highlight of the morning was a panel discussion that predominantly looked at managing and harnessing disruption, involving Hilton’s Ian Carter, Martin Brühl of Union Investment and Belmond’s Roeland Vos.

“While we won’t see the same kind of conversion activity witnessed after 2008, as things slow down a little bit, unbranded hotels underperforming to market will start to seek the protection of larger brands,” Carter predicted. “I think commercial conversion activity will pick up, probably across the board.”

“I continue to see a large number of opportunities for us to grow in new and future destinations for luxury travellers,” Vos said. “I do think that, overall, there is an opportunity here to take it to the next level – and the fact that will be inhabited by a twoyear delay, or something along those lines, will not stop me from looking at the luxury space in a very positive way.”

Brühl saw particular opportunity in the US. “We follow the demographics,” he began. “You can see lots of secondary and tertiary cities in the US where you have significant tech and population growth, and these guys need modern concepts for hospitality as well. The industry is developing rapidly to cater for these things.”

Elsewhere, during a panel on capturing the consumer, Dimitris Manikis of Wyndham discussed the importance of meeting brand expectations.

“A brand is not just a sign on the wall,” he said. “It is about DNA, what it means to people. We are the biggest franchiser of hotels in China, so Chinese consumers travelling to Europe are highly likely to search out our brands. We therefore need to be listening to what they are saying over there and converting that message to our owners back here in Europe, so that they reflect the product and the service.”

“To develop your brand, you must listen,” agreed IHG’s Karin Sheppard. “There must be that consumer need. And if you are a global brand, it has got to be scalable, otherwise it makes no sense for the owner. When we talk about adding new brands we look at whitespace opportunity. Is there enough demand? Is it different enough to our existing brands? Do we need something new to address it?”

During a panel on ‘risk versus reward’, which also touched upon a number of these themes, Credit Suisse managing director Steffen Doyle was more bullish than most when it came to the overall economic outlook.

“It might be contentious, but I actually think we are at a false peak; you can see a very strong recovery for next 18–24 months,” he said, pointing to the possibility of a US-China trade deal boosting the manufacturing sector. “I have never seen so much liquidity in the market and there are so many people chasing the same deals,” Yotel CEO Hubert Viriot added. “It is very difficult to make a deal work and you need to be able to articulate your USP. We invest in digital marketing, lower overheads, using technology to reduce operational costs. If you can do all that successfully, you can unlock more value in assets.”

The final session of the day looked at future opportunities in more depth, with panellists stressing the need for flexibility in getting such deals done.

“For the entrepreneur in me, the beauty of leasing is that it separates ownership and operational risk,” Marriott’s Carlton Ervin said. “I like to think we are a really good operator, so we can take that operative risk. It is my hope that over time, we can morph to a more understanding position on leases that we currently have.”

One executive already willing to show that flexibility was Christian Giraud, who also stressed the need to have brands in place that adapted to shifting guest demands.

“Lifestyle is 1% of existing hotels, but 10% of the pipeline,” he said. “We now have 10 brands in that space, from luxury to economy. We also have three pure leisure resort brands, which we are convinced is a big trend of the future.”

“It is nice to finally share the stage with somebody who has more brands than we do,” Ervin said to laughter.

Amid so much uncertainty in the market, it is highly likely that operators with serious scale, such as Accor and Marriott, will be best-positioned to profit from any opportunity that arises.

Where the road ahead is taking us, however, nobody seems entirely sure. 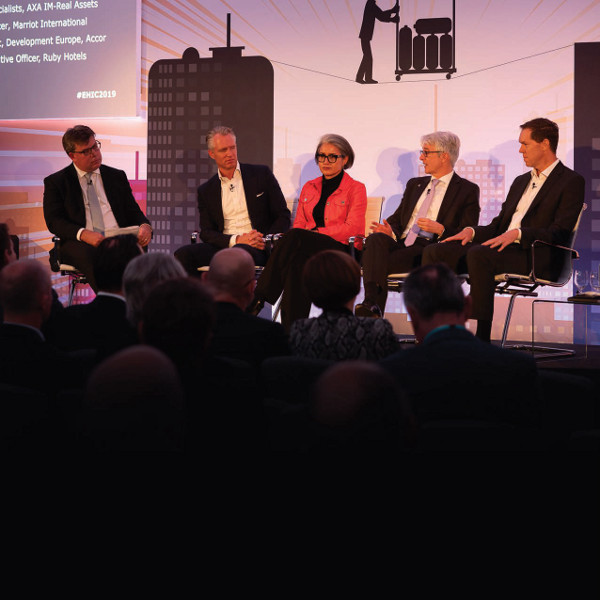 Panellists discussed a variety of dilemmas facing the industry. 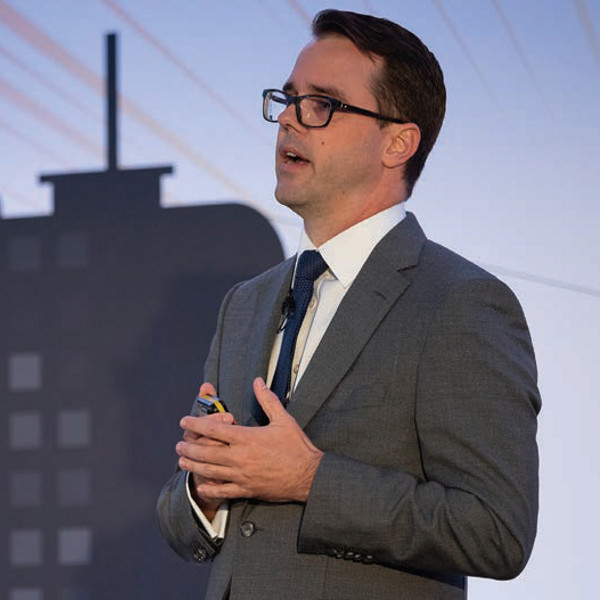 Andreas Scriven, Deloitte, was the first to speak. 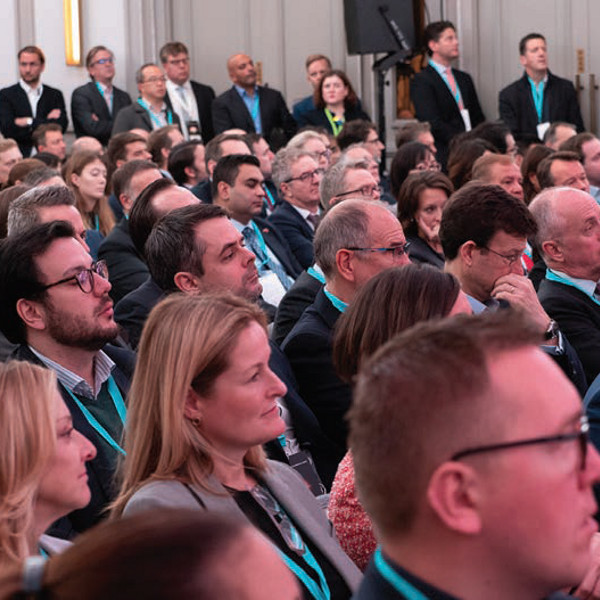 An audience made up of all levels from the sector gathered to listen to thought leaders. 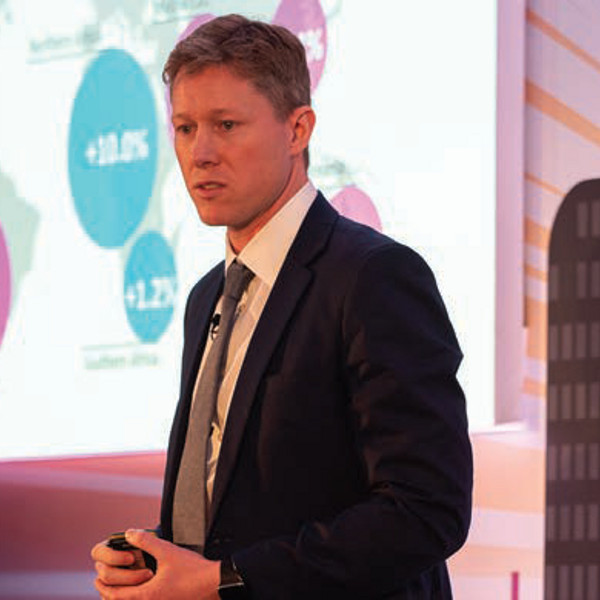 Robin Rossmann, STR managing director, stressed the importance of understanding the next generation.
Post to: