Striking out on your own is risky in any business, let alone fine dining, but the potential rewards are rich. Basque culinary pioneer Eneko Atxa shares the philosophy that has brought his Azurmendi restaurant near Bilbao worldwide acclaim and three Michelin stars.

When Eneko Atxa bought his first car, he also resigned from his job. His father was not happy. Having watched his son complete his education, settle into a steady job and earn a dependable living, he’d assumed that was it – he was set for life. The young Basque chef had other ideas, though; he was only just getting started.

“My father was a traditional man who had worked in the same place his entire life, so he was surprised when I said I was leaving my job,” explains Atxa. Not only was he quitting his job, he was moving on to work for free.

“He got angry because he couldn’t understand why I would go and work for free when I had a good job,” he says. “But I was living in the restaurant where I worked, between the sea and the mountains far from home. As soon as I had enough money, I bought myself an old car and that gave me the freedom to move around and properly start my training.”

More than 20 years later, this eagerness to spread his wings and a drive to learn remains. Atxa opened his flagship restaurant Azurmendi in Larrabetzu, a short drive from Bilbao in 2005, aged 28.

It was awarded its first Michelin star in 2007, the second in 2010 and the third in 2012. This year Elite Traveler named Azurmendi the best in the world and Atxa has long been at home among the top international chefs.

In 2016, he opened Eneko at One Aldwych in London, a more casual UK outpost of his Basque cuisine, and later this year his first restaurant in Tokyo will launch. Yet it seems he needs to rein himself in. “I’d love to open more new concepts in different places – a pinxtos bar, a food truck or somewhere to serve traditional dishes. I love gastronomy in all its forms and I’d love to do more but I can’t spread myself too thin, either,” he says.

Azurmendi sits in a striking position, reflecting the contrasts of the Basque Country. On a hillside in lush green countryside, it overlooks a motorway that cuts right through the landscape – a reminder of the area’s industrial past.

Being a pioneer is a lovely thing, but it is difficult; to make it easier, we are starting to mix with professionals from other disciplines, such as environmental sciences.

The fine dining restaurant is just one part of the large complex Atxa and his family have mounted – there’s a catered event space and a bodega for the family wine business. More recently he has opened a more informal restaurant, Eneko, below Azurmendi. On top of it all sit the greenhouses and vegetable patches proudly displaying regional produce.

Atxa’s path to the profession is hardly uncommon for a chef: as a child he did not have cooking ambitions – in fact, he didn’t have many ambitions at all. “I had no idea what I wanted to do in life, but I knew I didn’t want to go to university,” he says. “Today, I understand I could have done a lot of things, because I now know what I like to do.”

In the end what attracted him to cooking was his love of food and the culture around eating that he grew up with. “The dinner table has a meaning that goes beyond gastronomy. It is a meeting point. We all sat around the table, we ate well and we spent time together,” he explains.

He entered culinary college aged 15 and took to it immediately, and compares the experience to when a child starts to discover things in the world.

“I always say that I didn’t like to study, but I like to learn. In the kitchen I could learn new things every day because I truly knew nothing,” he explains.

Looking back, he wishes schools would dedicate more time to finding out what pupils are good at and feel passionate about, to focus their minds on where their future lies.

“If we are at the forefront of technology and discovering all these new amazing things, why can’t we make an effort on a basic level to try to understand people better?” he asks.

It’s an approach he has embraced at Azurmendi. “We have 40 members of staff and I can tell you the characteristics that I see in every one of them. I have spent the time to get to know them because I like it and it is my passion. We don’t ban anything, but it is forbidden to not know your colleagues’ names.”

Mentoring clearly matters. “Some people you know are going to be successful because it is so obvious, but I am almost more excited by the quiet ones; those who are more introverted – they learn, soak up knowledge, save it and you might not notice it but they make it their own and transform it into something you might never have imagined,” he says.

I don’t like to be boxed in because it restricts me; I like to do whatever I feel like. This is not a statement of intent, it is just a feeling. My heart has to help me cook.

These days Atxa’s operation is synonymous with sustainability – Azurmendi is a past recipient of the award for most sustainable restaurant on the World’s 50 Best Restaurants list. In fact, his way of working with staff falls under the much wider banner of sustainability and social responsibility that he employs at Azurmendi – he believes it ought to go beyond environmental considerations.

“When people talk about our sustainability they always mention the technology of the restaurant space; they point to composting, energy usage and how we work hard to use organic ingredients. Those things are all true, but, for me, being sustainable also means being financially sustainable. I just cannot understand any restaurant that is not profitable,” he says. But plenty of restaurants operate on a losing model? “Maybe, but I don’t believe in that. If you lose money, you risk jobs that you are responsible for, but I buy a lot of produce from suppliers and I need to pay for it.”

He is aware that his stance is not shared by the majority. “I know that the romantic narrative is different; the romantic thing is to say, ‘I am a pioneer and I put everything on the line for this because I don’t make money’, but I want to make money to help others make money too,” he says. “That doesn’t mean I am not romantic, but the money allows me to launch other romantic projects.”

The sustainable elements include photovoltaic panels and rainwater recycling. Water is reused in the bathrooms and diners can arrive in their electric car and recharge it for free. Atxa and the restaurant have been instrumental in setting up a composting station for the use of the community in their small town. But it is not easy to lead from the front.

“We are frequently unsure as to how to continue on a path because there’s no one ahead of us, so there is no one to tell us how to proceed,” he says. “Being a pioneer is a lovely thing, but it is difficult; to make it easier, we are starting to mix with professionals from other disciplines, such as environmental sciences.”

Keen to gain a broad experience, Atxa spent the years after culinary college working in restaurants that focused on everything from set menus to wedding parties, from fine dining to traditional Basque cuisine. His first high-level job was as the head chef of Etxebarri, the well-known grill restaurant. After that he headed to the local restaurant Andra Mari and the next step was to strike out on his own with Azurmendi.

He wasn’t completely on his own – he ended up partnering his uncle Gorka Izagirre who wanted to open a bodega selling local Txakoli wine from the surrounding vineyards. Having Izagirre on board also gave Atxa a strategic advantage and a pragmatic focus.

“I wanted to set up a small restaurant where I could do what I wanted above a bodega, but my uncle said no. He wanted us to open a large space for events because it would allow us to do more of the things we liked. I had done lots of weddings as part of my training and agreed that it was a good idea,” he says.

Uncle Gorka was right. “In the first years it was the income from those events that kept us going. Little by little the local people got to know us. This in turn meant that my small restaurant also became more well-known,” he says. The wedding parties continue and, unusually for a chef of his level, he enjoys it: “I like catering for weddings and I think I’m good at them.”

He recalls opening his first restaurant as a horrible experience. “I have such bad memories of that time; everything was stressful and it felt very fragile. People often idealise their wedding day and the same can be said for the opening of your restaurant. For me it was not fantastic, I remember it as a very painful time because for the first time in my life I had the pressure of people relying on me.”

Much as journalists try to get Atxa to ally himself with a style or label, he refuses. “I don’t like to be boxed in because it restricts me; I like to do whatever I feel like. This is not a statement of intent it is just a feeling,” he says. “My heart has to help me cook.”

He often doesn’t recognise descriptions of Azurmendi in articles because he never seeks to describe what he does. “I do what I want; if one day I am sustainable and the next day I take a different direction it might look like it is a trend, but I hate trends. They are superficial and I like to do what I like.”

Whatever people might think, he says, his life is absolutely normal: “Things are good for me and I am happy – I spend time with family, with work and my sport. I do this because it is my passion. The day it is no longer my passion is the day I will stop doing it.”

In a world of hyperbole and grand descriptions, it seems it is simplicity and curiosity that continue to drive Atxa. “Common sense is our leitmotif,” he says. “I like to use common sense, treat people well and for them to treat me well, make them happy so they make me happy.” 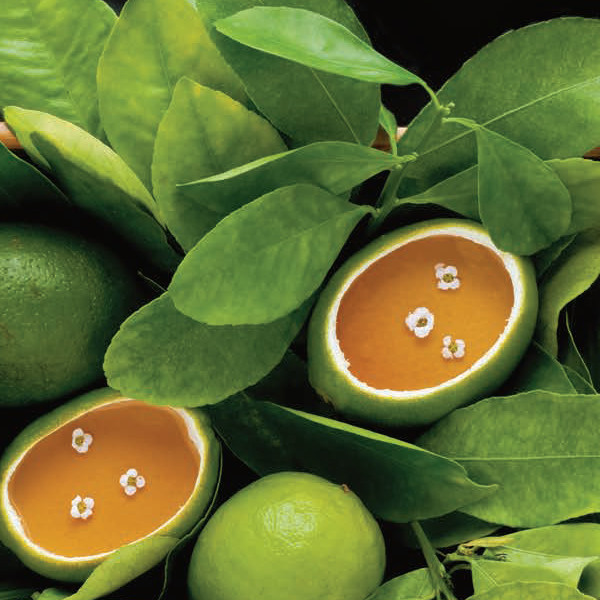 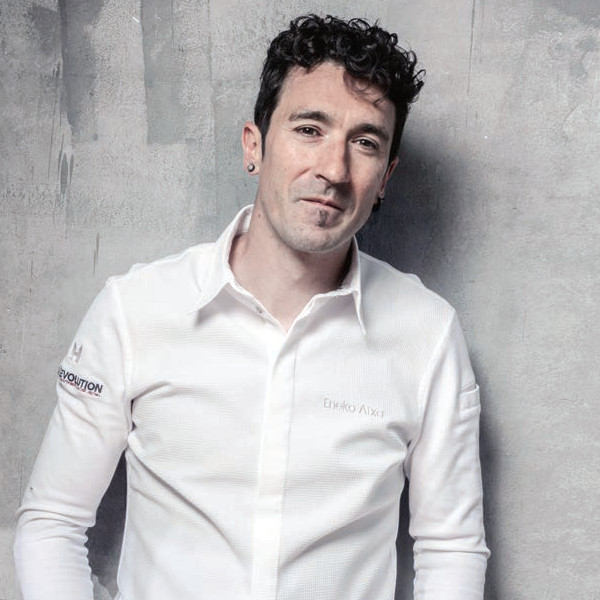 Eneko Atxa will continue forging his own path in cuisine for as long as he retains the requisite passion. 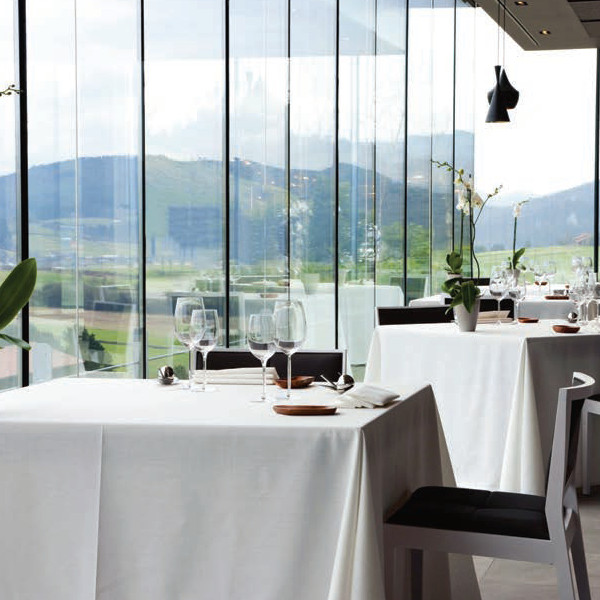 Atxa opened Azurmendi in Larrabetzu in 2005 when he was just 28 years old. It is famed for its sustainable ethos as well as its fine food.
Post to: