A touch of France

Chef Thomas Keller has been in the business for four decades, and this year celebrates 25 years at flagship California-based restaurant The French Laundry. He tells Tina Nielsen that his love for the profession and a sense of duty mean it will be some time before he hangs up his apron.

As he reflects on 25 years at The French Laundry, Thomas Keller shares his secret to the success of the Napa Valley restaurant. “The secret is this: go to work every day and do better than you did yesterday,” he says. “There is no long answer. It is guys and girls going to work, and doing better than they did yesterday.”

It would take a long memory and considerable time to list the many accolades and awards bestowed upon Keller during his career so far. For starters, he is the only US-born chef to hold three Michelin stars for multiple restaurants – The French Laundry and New York’s Per Se.

He has been named Chef of the Year by the Culinary Institute of America, and Outstanding Restaurateur and Outstanding Chef by the James Beard Foundation. In 2012, he became only the third American in food to be made a chevalier of the Légion d’Honneur for his work in promoting French cuisine in the US – the other two recipients being Alice Waters and Julia Child. And, as president of Team USA, he brought home the gold from the prestigious Bocuse d’Or competition in 2017.

He wears the success lightly. “Everything that is written about you today is what you did yesterday. It is nice that people wrote nice things about you, or unfortunate that they wrote bad things, but that was yesterday,” he says.

The down-to-earth attitude has won him many fans among an army of young chefs who have trained in his kitchens. Grant Achatz, the chef-owner of Alinea Group, who first entered The French Laundry kitchen in 1996, says Keller exudes professionalism.

“He is somebody who is really proud of his profession and he is constantly trying to elevate the industry, not just his own restaurants or his team members,” he says. “He is the advocate for professionalism in our industry.

“Chef Keller was the first one in the kitchen in the morning and the last one to leave in the evening. He made it his credo to lead by example, knowing that all the young cooks were watching him the whole time.”

Keller credits his mother with giving him a robust work ethic, laying the foundations before he even entered a kitchen. “My mother raised me as a single parent and she helped me understand the importance of awareness, of paying attention and the importance of detail,” he says. “Those are things that I found in my home life, and that is what gives you the foundation for your professional life.”

He received early cooking lessons from his older brother, Joseph, who was the first to show an interest in cooking – and who continues to work as a chef today. “He would teach me how to make hollandaise sauce or cook an omelette; he helped me understand lots of those things as a first mentor,” he explains.

The interest in cooking may have been piqued early at home, but Keller didn’t embrace a career as a professional chef until 1977. In Rhode Island in the kitchens of The Dunes Club, he met another mentor, Roland Henin, who became a major influence on the young chef’s career. “One day, chef [Henin] asked me why cooks cook,” he recalls. “I didn’t know what to say, but he said, ‘No matter who you are or where you are, we cook to nurture people’.” The words resonated; his path was set. “That summer, in July 1977, was the moment I decided to become a professional chef,” he says.

The way forward is French

Henin was French, and in the 1970s French cooking was the way for young chefs coming through – Paul Bocuse and Alain Chapel were the big names and nouvelle cuisine was making waves. It was an exciting time to be a young cook, says Keller. “Aligning yourself with the great French chefs and this idea that chefs didn’t need to stay in the kitchen; they should be a person who had the ability to interact with guests, from the kitchen to the dining room,” he says.

1994
The year Thomas Keller arrived at The French Laundry.

It marked the beginning of Keller’s career and his quest to move to France, which he eventually did in the early 1980s, when he spent two years in Paris. “It was monumental for me,” he says. “Coming back to New York after having experienced life in France, I took up the mantle of becoming the best chef.” He always knew he wanted to open his own place. “I am an entrepreneur at heart. I am a nurturer and I always wanted to have my own restaurant,” he says.

The first opportunity to be a restaurateur had come in the late 1970s, before he headed across the Atlantic Ocean to France. Along with two friends, he opened the Cobbly Nob in South Florida – a short-lived venture that lasted around a year. “We were superinexperienced, super-naïve and we lost whatever savings we had in that restaurant,” he says. “I was humbled by the experience, we all were.”

There were some lessons in the failure, “though I didn’t learn from our mistakes in the way I had hoped to, because I made some of the same mistakes in my second restaurant”, he says.

“I am an entrepreneur at heart. I am a nurturer and I always wanted to have my own restaurant.”

The second shot came in 1986 when Keller opened Rakel in New York City’s Hudson Square neighbourhood. It was a heady time. “It was just extraordinary, the energy about the restaurants and the young chefs coming up. You are in New York, the centre of the universe, and you have an opportunity to make a stand and make a name for yourself.”

In 1994, all of his experiences culminated in the town of Yountville, California. That he ended up in Napa Valley was a coincidence. “Chalk it up to destiny or fate,” he says. He was driving through Napa Valley and a friend had suggested he check out The French Laundry. “I wasn’t planning on moving to Yountville, but The French Laundry was there,” he says. “It was that simple. Sometimes life takes you to places that you don’t know you are going to get to.”

Taking over The French Laundry from Don and Sally Schmitt was a dream come true for Keller, who had been inspired by seeing how restaurants in idyllic locations in the French countryside operated.

“In urban environments – Paris, New York and London – the restaurant experience begins when you walk through the door, but we are in a rural setting, and the experience begins outside in the garden,” says Keller. “This is more of a holistic experience; it is wonderful seeing the chefs walking across the street picking herbs, the bread being picked up twice a day on bicycle from the bakery. All that happens here in a location like Yountville, and it will happen in the countryside in France.”

The French Laundry was chosen as one of the 10 best restaurant openings in the US by Esquire magazine. But the biggest impact came with a recommendation from society writer Herb Caen, who enjoyed himself so much that he dedicated two paragraphs of his column to the restaurant. It changed everything.

“All of a sudden, Herb Caen saying he had an amazing experience at The French Laundry set us on a path of great awareness with people who were interested in dining,” says Keller. “Coming to Napa Valley started to become something people did. That was the beginning of the success of the restaurant.”

The road to success

Keller has since opened a string of restaurants. Per Se in New York came first, 10 years after The French Laundry. The two are similar in spirit, yet different.

“They are not identical twins, but we have the same format on the menus, which change every day,” he says. “Corey Chow, who is the chef de cuisine at Per Se, and David Breeden at The French Laundry come from different backgrounds. They both come from the Thomas Keller background, but they have different points of view; Corey is Chinese and David is from the Blue Mountains [in Australia]. Your fundamental personality and work ethic are brought to you by those who teach you, and parents are the most important.”

Other restaurants in the Thomas Keller Restaurant Group are Bouchon Bistro and Bouchon Bakery, Ad Hoc in Yountville and, most recently, the TAK Room in the new Hudson Yards development in New York City.

Keller rejects the notion of the rock-star chef. “When I started, it wasn’t about rock stars or celebrity chefs,” he says. “I didn’t become a chef to be considered a celebrity. Who really cares?” I am a cook. I go to work every day, and I try to inspire my team and make an impact. I try to be part of the process.”

He is keen not to overplay his role. Perspective is everything. “I don’t kill anybody and I don’t save anybody’s life. I might overcook your steak but, you know, I will cook you a new one. That is the worst I can do,” he says. “Our wine team takes a cork out of the bottle and pours the wine. It is all easy.”

Certain of the power of mentorship from the start of his career, he has embraced the mentoring of young chefs to the full as he looks to pass on the mantle. “There is a point in your career when it is not about you and your restaurants any more,” he says. “It is about the profession and how you elevate standards. The only way to do that is by mentoring and letting those mentees leave your restaurants and go out and express those standards.

“It is up to you to empower them and allow them to be successful and make mistakes, and help them to understand what their mistakes were. If you continuously train them and mentor them they become better than you. If they are not better than you, sorry, but you have done a shitty job.”

For a professional who has been so successful, it is perhaps little wonder that another award arrived, somewhat prematurely, in 2012 when Keller was recognised by The World’s 50 Best Restaurants with a lifetime achievement award. Is there much chance of Keller hanging up the apron any time soon? “No, I don’t think so. I am 63, I have great teams in my restaurants and they don’t really need me any more, but I enjoy being there and I want to continue being in The French Laundry and Per Se, and continue being excited by the work they are doing,” he says.

“That I am where I am today is extraordinary. It is more than a dream. Sometimes I have to pinch myself. When I walk around and see it through the eyes of diners who visit for the first time, I realise how lucky I am to be here and have such amazing people.” 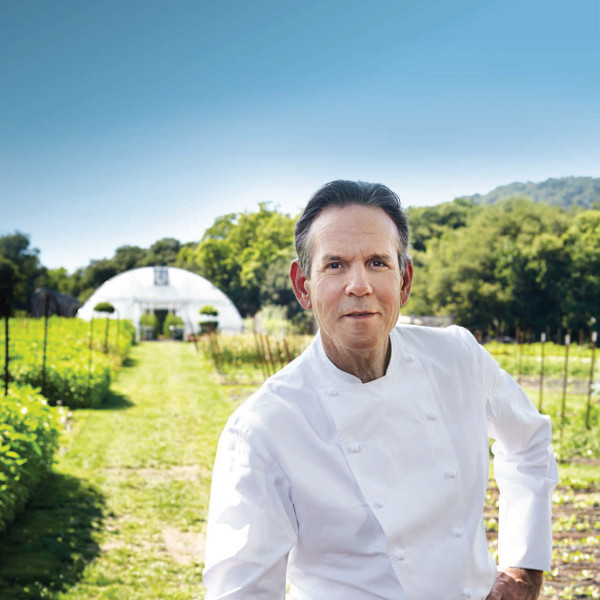 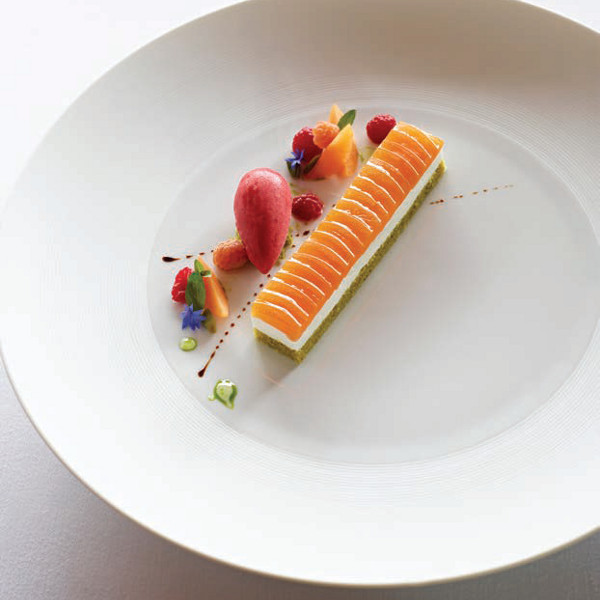 The Peach Melba served at Per Se in New York.
Post to: