From phones to fridges to cities, it seems as though everything from the mundane to the colossal is fast becoming ‘smart’, but what should ‘smart’ mean in the context of the guest experience? Ben Walker hears from Lennert de Jong of citizenM on striking a delicate balance between simplifying and optimising processes through the latest technology platforms.

Automated homes have long fired people’s imaginations. In some respects, the futuristic visions of writers like Ray Bradbury and JG Ballard have now become a reality. The very first appliance to be given ‘smart’ capabilities 30 years ago was a toaster; now if someone buys a new fridge or washing machine, the chances are they’ll receive a smart product.

Increasingly, people enjoy the convenience of controlling their home from a phone or tablet. They can spy on the cat during their lunch break and even turn the sprinklers on while they’re at the hairdressers. More than 150 million homes in Europe (36% of the total) and North America (57%) are forecast to use a smart management system by 2021, according to Swedish research company Berg Insight. But what does this mean for hotels? It is one thing to have the internet of things (IoT) in homes and with a familiar system. In a hotel, however, there’s the risk that new tech may increase frustrations rather than alleviate them.

CitizenM is often mooted as one of the most techforward brands in the sector so it’s surprising to hear its chief commercial officer, Lennert de Jong, say, “Hotel guests are not interested in IoT. They do not want to be bothered by processes.”

However, what De Jong is clearly underlining is that, more than anything else, IoT is about creating efficiencies behind the scenes, rather than any big ‘wow factor’ for the guest experience.

It is a very different statement from the one made by Hilton’s CEO, Christopher Nassetta, in 2017 stating, “Imagine a world where the room knows you, and you know your room,” as he unveiled the group’s first IoT room concept. So far, Hilton has 3,500 ‘connected rooms’ across 15 properties, with plans to roll out the technology to the majority of its portfolio of nearly 5,900 hotels.

Nassetta’s dramatic announcement suggested each room was automatically personalised. In truth, the connected rooms give guests an easy way to control the room from their phones rather than replicating their preferred settings.

Although the data is there to make it possible (because IoT devices are constantly pumping out data), giving guests their preferred light and temperature settings when they walk through the door is not going to make a big impression. Hoteliers have far better ways to reward loyalty such as gifts, wine, freshly cut flowers or discounts.

Speed is of the essence

More than anything else, guests do not want to waste time, believes De Jong. For him, the test of applying any new technology is always the same. “We will only do something if it improves the customer experience,” he says.

Minimising inconvenience throughout the customer journey, from the moment the booking is made to checking out and onward travel, is a common goal for hotel groups. With that in mind, phone-enabled room entry has either been adopted or piloted by most large hotel operators to aid this process. But not all hoteliers see this as a benefit.

“Let’s put ourselves in the shoes of the customer,” says De Jong. “You’re going to be opening the door several times and if every time to you need to think: ‘where is that app? I’m in the elevator and the Wi-Fi connection is not great, or my data or power ran out’, then a plastic card is much better. You always have to keep in mind, is it going to improve the situation that you currently have?”

Once inside the room, a frequent guest frustration is too many light switches. At citizenM, an iPad controls room functions and handily includes a master switch to kill all the lights. There are also switches on the wall for the lights and the blind, but the only way to control the temperature, the blackout curtain, television and alarm clock is via the central iPad.

IoT systems are also good at predictive maintenance, should one of said functions not be operating correctly. “Instead of the guest reporting that their light bulb is not working, we have dashboards that monitor the iPads 24/7 so we can get into the room and fix it before the guest comes back from dinner,” says De Jong. Sensors are used in many of the large convention hotels in Las Vegas to help housekeepers know whether rooms are occupied or not. This eliminates the need to knock on doors and ask whether the room is ready to be cleaned and aids in planning maintenance. It also supports a better experience for guests as they are not disturbed.

“Instead of the guest reporting that their light bulb is not working, we have dashboards that monitor the iPads 24/7 so we can get into the room and fix something before the guest comes back from dinner.”

Similarly, a humidity sensor placed in bathrooms can tell hotel staff about a leak before water starts seeping through the ceiling and into the lobby. “You can find out if something is wrong before the customers finds out,” says De Jong.

Back-of-house applications of smart technology also provide significant benefits for hoteliers and ultimately guests too, because they can automate processes and free up staff to provide a one-to-one service. IoT systems make predictive maintenance easy and help hotels save money on energy and water consumption.

In stockrooms, cold rooms and minibars, sensor pads can automatically send out new orders directly to the supplier, with no human intervention needed. Once the sensor sees that a certain item is getting low, an order is placed and new supplies arrive without staff needing to do anything.

What else is new?

As with many smart devices, voice activation is also front-of-mind of any operator considering IoT technology, and was introduced in 2016 at a handful of aloft properties, though privacy concerns have slowed its roll-out in hotels. Even among those who use Alexa or Siri at home, 41% are concerned about ‘who is listening in’ and how their data is used, according to research from Microsoft.

There is also the issue of overkill. If there are already three ways to control the room settings – manually, from an app or an iPad – do guests really need another?

“If we were to do something, we’d probably do something with Apple where you can push the button on the remote control and activate the microphone, but it’s not on our priority list,” comments De Jong.

What is on everyone’s priority list – guests and operators alike – however, is data. It is often said that data is the new gold, but just like gold it needs to be refined and processed appropriately in order to have business value. IoT devices and Wi-Fi connections emit constant data streams. The more information amassed about a guest, the easier it should be to predict their preferences. However, hoteliers need to decide what is important and what is not.

Although people are very familiar with Amazon and Spotify’s use of algorithms, hotels still need to judge what is appropriate. For example, it may be okay for Netflix to make suggestions based on a customer’s viewing history, but for a hotel to store data on what individual guests watch in their rooms might be seen as a breach of privacy.

JG Ballard’s 1975 novel High-Rise describes how life in a luxury high-rise descends into chaos following power failures. Similarly, IoT brings all the benefits of connectivity but also all of its problems. If simple actions such as opening a door can only be achieved with a smartphone or an electronic key, then Ballard’s cautionary tale has more resonance than ever. And since smart technology leaves a constant data trail, there are also concerns over this data getting into the wrong hands.

For example, in 2017, the Romantik Seehotel Jägerwirt in Austria suffered a ransomware attack on its key card entry system, meaning guests were locked out of their rooms and new key cards could not be programmed until the ransom was paid.

Despite there being an estimated 20 billion devices connected to the internet, IoT technology is still in its relative infancy. Much like the hotel sector, it is operating in a highly fragmented landscape with myriad systems and manufacturers, and an absence of standard protocols.

The hotel industry was one of the first mass sectors to embrace the internet and many hotels still use siloed, old-school operating systems. For IoT technology to be truly effective and valuable, it needs to be efficiently integrated into existing operating systems for the industry to continue leading the way.

“A ‘smart’ hotel does use smart technology, but it’s more than that, it is about the hotel’s smart design, its smart location, it’s about hiring smart people and delivering a smart service.”
Olivia Byrne, director, Eccleston Square Hotel

“Guests are becoming increasingly disappointed if they can’t access the same abundant choice that they have at home. Casting is becoming more and more popular, and it won’t be long before it’s the standard as opposed to the standout.”
Jane Pendlebury, chief executive, HOSPA

“As a hotelier, knowing when to rely on AI and when to count on the value that human intelligence brings to you is essential.”
Myriam El Harraq, vice-president, digital products and innovation, Accor

People who use Alexa or Siri at home that are concerned about ‘who is listening in’ and how their data is used.
Microsoft 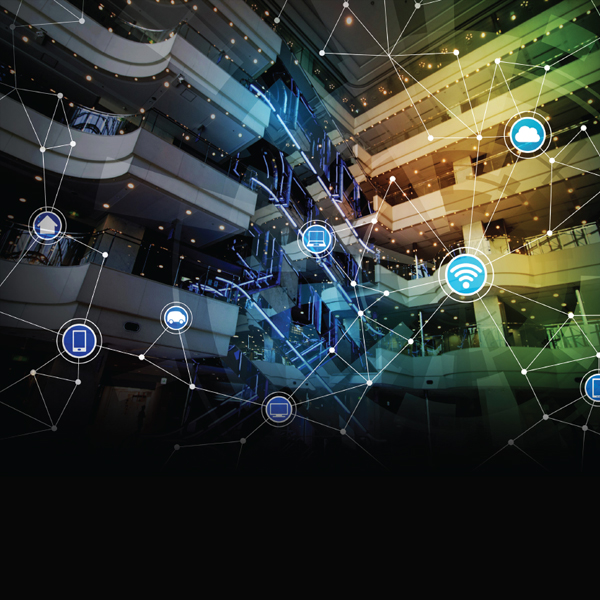 At citizenM, should a light bulb stop working, the hotel has dashboards that monitor the iPads 24/7 so it can fix the problem before the guest returns from dinner. 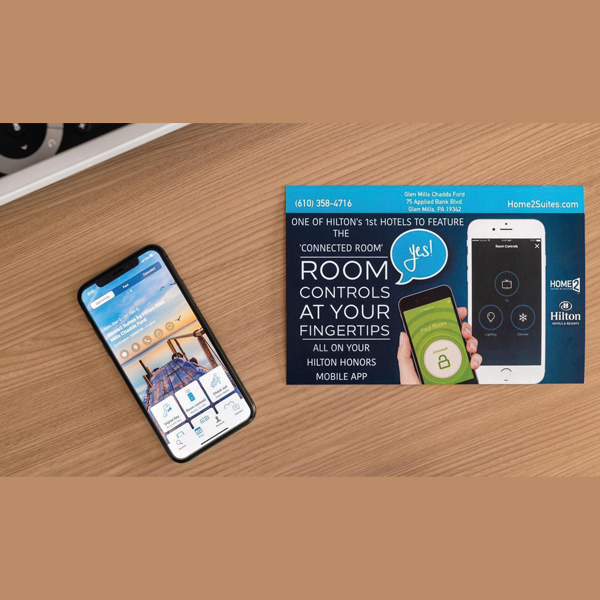 Hilton gives its guests a new way to control their room through their phone. 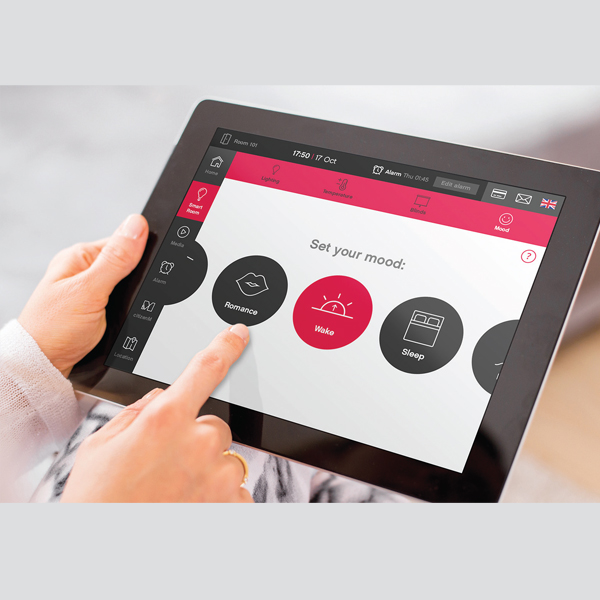 CitizenM allows its guest the ability to set the mood through their room’s iPad.
Post to: