A seat at the table

Traditional operators have long avoided any association with hostels but, running out of niches and labels for different consumer demographics, some are beginning to explore whether the shared accommodation concept can help them capture millennials and Gen Z. Tim Gunn asks Generator’s Alastair Thomann, Etienne Matichard of Jo&Joe and Hostelworld’s Paul Halpenny about the potential of communal living.

As a verified reviewer, Jan Stuart won’t offer more than a tentative recommendation for the hostel he visited in 2006. Then again, kept awake by “a cacophony of screams and shop tools”, he left after an hour-and-a-half.

His was one of a spate of disconcerting reviews to surface in the mid-2000s concerning a sinister Slovakian spot. Although there’s no shortage of people with a long and positive tale to tell about staying in shared dormitories, the story of this hostel in particular continues to exert a disproportionate influence.

On balance, Stuart’s was a relatively sedate experience. Jimmy O scored the accommodation zero out of five for its “thinly veiled assault on humanity”, while John Beifuss drew attention to its “intimations of Abu Ghraib”. “Teenagers should love it,” agreed James O’Ehley, recounting how he was forced to watch a succession of grisly murders. Remarkably, the place was a front for what another film critic labelled “the machinery of recreational death”.

Around 700 litres of blood were used in the making of Hostel. According to Generator CEO Alastair Thomann, it’s yet to wash out of the American psyche.

“When you go over there to discuss hostels the first thing everyone says is ‘Well, you know the movie’,” he sighs, slipping a hint of grim concern into the impression. “But I haven’t actually seen it.” CMO Jason Rieff, who’s acquainted with the opening half hour, offers some clarification. “A bunch of hostel guests get locked up and taken apart,” he summarises. “It got a little bit too gory for me.”

And so, before opening its first US property on Miami Beach, the company formerly known as Generator Hostels quietly excised the second word from its branding. It hasn’t looked back since.

“It was almost as if our old branding was boxing us in,” says Rieff. “We’ve jumped from what the average American would have seen as the stereotypical hostel to a cooler design hotel, and now we’re becoming a cool lifestyle brand, which is a really great journey.”

“Immediately, our corporate bookings went through the roof,” adds Thomann. “When they see the word hostel, travel managers ignore it. Now we’re just called Generator, they see the same pictures and they book.”

It wasn’t that a switch was flipped – Generator was getting ‘boutique’ buzz as far back as 2013, but no one foresaw any hostel chains hosting DJ Khaled launch parties and Dwyane Wade dinner bookings in Miami then, let alone partnering with huge, socially conscious brands like Ben & Jerry’s.

“All this fun stuff is great,” Thomann continues, “but really the magic is that we’ve taken profits from the initial 12 hotels from €20 million up to €31 million. Guests are paying a huge premium for our lifestyle and social aspects.”

Hostel was primarily a North American phenomenon, but its title conjures images of grubby, grimy bedrooms and unwashed backpackers all across the world. For many, the fact that the average hostel guest spends more on travel annually ($4,474) than other travellers ($3,155) makes as much of an impression as the names towards the end of the film’s credits. Over the past five years, however, crossover successes like Generator have tempted groups as large as Marriott, Hilton and Accor up to the blurred line between cheap hostels and boutique hotels.

Up to it, but not much further – only one of those operators has shown any willingness to sell by the bed. After grabbing all the headlines by announcing its “hostel on steroids” in 2017, Hilton settled on making the eventual Motto brand an ‘urban micro-hotel’ along the lines of Marriott’s Moxy, which launched in 2014 as a “boutique hotel with the social heart of a hostel” for communally minded, independent travellers.

“With what hostels stand for, we just didn’t feel comfortable about planting our flag in there,” Tripp McLaughlin, global head of Motto, told Skift last year. It’s telling that the controlled drugs didn’t seem to be as much of a problem as the accommodation model, although with Motto’s rooms averaging 163ft², the steroid use may also have been overstated.

That’s probably for the best. If anything, it was Hilton’s heft that restricted its ability to launch a successful hostel brand. After almost 100 years of doing everything but selling by the bed, it’s a fiddly and laborious task for a $25 billion hotel empire to introduce and incorporate a new system specifically designed to undercut its model. By contrast, when Queensgate Investments paid $480 million for Generator in 2017, replacing the Excel spreadsheets that comprised the company’s revenue and reservation management systems was a clear path to growth.

“There was no system out there that could manage selling and managing rates by beds, rooms and longstay apartments,” explains Thomann, who was hired by Queensgate shortly after the takeover. “But if there’s a big festival in town, for example, bookings for dorm rooms will go through the roof without private rooms selling.” As more established software developers weren’t much interested in tailoring a hybrid suite of interfaced systems for a hostel group, Generator partnered with young, up-and-coming companies with the willingness and flexibility to do so rapidly. “Now, before we come to work, we’ve made 30,000 rate decisions. We could never do that before,” says Thomann.

Of course, as far as room rates are concerned, Hilton’s been making the most out of advanced systems for years. The operator opted for the micro-hotel model after concluding that hostel guests, “in fact, do not like rooming with strangers and often book with just their friends or family”. Accor, on the other hand, didn’t think it was possible to create a hostel vibe without including a hostel. Partly developed by the young, start-up-minded employees in Accor’s shadow executive committee, Jo&Joe sells a mix of shared dorms, private rooms and rental apartments using an adapted version of the group’s hotel framework.

Paul Halpenny, chief revenue officer at Hostelworld, thinks this ‘open house’ concept has potential. After a 42% rise in bookings from solo travellers (40% for men and 45% for women) during 2015–17, more than half of the online travel agent’s users come from the segment. Citing his company’s analysis of guest reviews for its yearly HOSCAR (Hostel Customer Annual Rating) Awards, Halpenny argues that these guests want to meet like-minded travellers, and that the best place to do so is in shared bedrooms. “Fundamentally, if you’re a solo traveller, and if you’re put into a room on your own, your opportunity to meet people is probably halved,” he reasons. “A hotel can put a couple of table tennis tables in the lobby to make it somewhat social, but that’s not really what people are after.”

45%
The increase in solo female travellers booking accommodation through Hostelworld in 2015–17.
Hostelworld

Not that hostel guests are searching out snore-ravaged nights in 12-person dormitories, either. What excites Halpenny about Jo&Joe is the way its room and bed designs allow for different degrees of privacy within each shared space. As Etienne Matichard, Jo&Joe’s director of sales, explains, “The designers created the perfect mix between a bunk bed and a private room.” The Paris-Gentilly property he’s based in employs everything from strategic screens and sunken top bunks, to miniature cabins and curtainedoff changing areas in order to create the most flexible sleeping spaces possible.

This works both ways. The happier guests are to stay in irregularly sized shared rooms, the more flexibility Accor has to open and operate from cheap, well-located buildings other hotel groups wouldn’t consider; and the more irregular the buildings – whether a convent in Rome, a cinema in London or a mansion in Rio de Janeiro – the happier guests are likely to be. “Plus the demand is so elastic,” stresses Matichard, “People can spend one week in an Airbnb, then three days in a hostel, then one day in a luxury hotel.”

Generator and Jo&Joe believe this combination of flexibility and openness is the way to appeal to what they call ‘the millennial mindset’. In travel terms, this applies to anyone looking for a distinct, locally influenced social experience. Rieff insists Generator is “very stringently against demographic targeting”, and the focus on mentality is a usefully pliable placeholder. The company’s goal has long been to address as many market segments as possible. When he used to work out of the London property, Thomann was fascinated by the proportion of each evening’s hip crowd that walked out in business suits the next day. Something like his ideal vision for the brand materialised there, too – sat across from him one morning was a mixed-gender group of elderly London punks and fresh-faced Australian students talking over coffee.

It’s less picturesque that Thomann’s story, but Matichard regularly sees Jo&Joe employees drinking with customers after clocking off. The brand does its best to encourage this, hiring staff with similar interests to their expected guests (seasoned international travellers in Paris and surfers in Hossegor, so far), letting them dress the way they want and inviting them to bring their friends in to socialise. Most all of, Jo&Joe’s design and hiring decisions are calculated to foster the most vibrant communal environment possible.

Indeed, one of the artists who decorated the Paris hotel learned to ride his bike on the same site. “We’re very involved in the local community,” says Matichard. “And it’s not just a marketing gimmick – there are actual stories like that happening around our locations. Because our target audience were born with televisions and the internet, they see when brands are lying. They know all the old marketing code, so we let things come naturally.”

Generator’s C-suite takes a similar approach. “We just provide the shell, right?” suggests Thomann, looking to Rieff. “Our guests, they’re the magic ingredient. The people that choose to stay with us create the atmosphere. The discussion about millennials and Gen Zs always carries a little touch of ‘there’s a bit of a problem there’, but I think that’s rubbish. Their attitude and approach is perfect for our industry. All the lifestyle, all the boutique, all the social elements belong together.”

“That’s easy for us,” laughs Rieff, noting that only two members of staff in the head office don’t fit into those demographics. “We’re all leading that kind of lifestyle, but when you have a Jo…” the CMO interrupts himself – “or not a Jo&Joe, but when you have a Hilton or Marriott say, ‘We’re great for millennials’, they’re just saying that.” 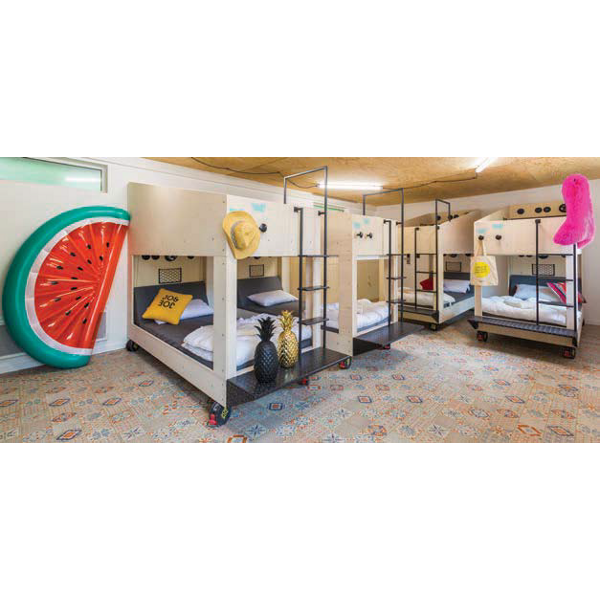 One of Jo&Joe’s Hossegor dormitories. 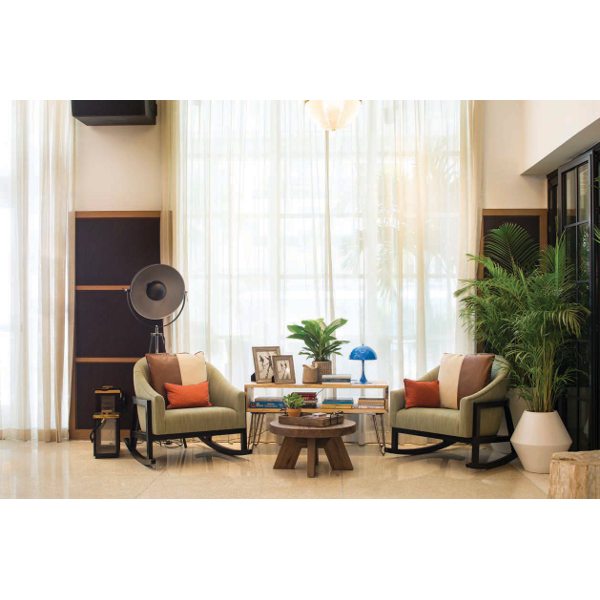 A chill-out space in Generator Miami. 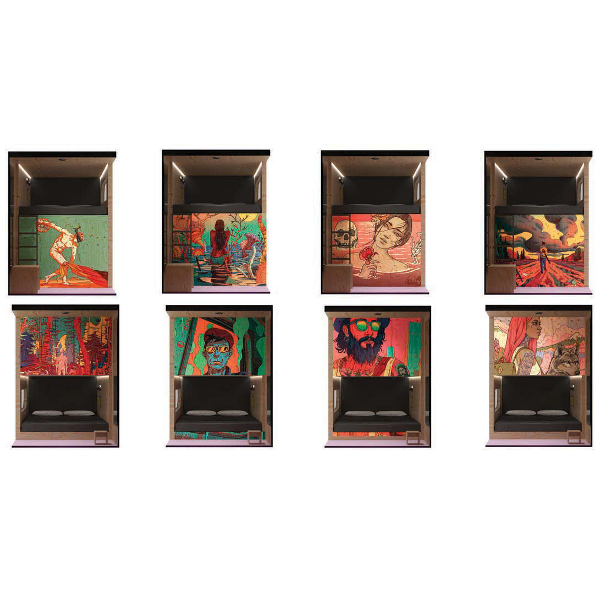 Artwork adorns booths and beds in Jo&Joe, Paris-Gentilly.
Post to: