A question of sustainability

While the hotel industry has long spoken of the importance of sustainability, it felt as though 2019 marked a significant uptick in the urgency and tone of discussion. From conference programmes to group-wide initiatives to off-the-record briefings, operators, developers and designers have grappled with issues of environmental responsibility and sustainable operations like never before.

This shift reflects changes within society at large, and the hotel business specifically, driven by a mixture of legislative pressure, corporate demands and guest expectations – all issues discussed at the latest Hotel Management International Dining Club, entitled ‘Developing Profitable Hotels with Sustainable Design for Unique Lifestyles’, and hosted at the Iris Ceramica Group’s London Gallery on 16 October 2019.

The panel discussion – moderated by event producer Monica Palmas – focused on the meaning and value of sustainable design within the context of shifting lifestyle and operational models, featuring input from three of the key vantage points: the owner-operator, the architect-designer and the investor-developer.

In her introductory remarks, Iris Ceramica Group’s CEO, Federica Minozzi, stressed the importance of bringing disparate constituencies under one roof. “We spend most of our time inside, and the spaces we inhabit directly impact the quality of our lives,” she began. “We should expect our architects and all people within the building community to be more careful, more attentive to the needs of people, whether that’s in terms of air quality, sustainable materials or the comfort of the spaces they create.”

Palmas then introduced the first of the evening’s speakers, Kempinski’s vice-president for technical services, PJ Gilbert. In his role since 2018, the former Starwood executive heads up design and architecture across the luxury operator’s portfolio. It was his belief that the terminology was too often counter-productive.

“I don’t like the labels ‘sustainable’, ‘green’ or ‘lifestyle’,” he revealed. “They’re misused within the industry and, as operators and designers, we have a duty to deliver well-designed buildings, which inherently means sustainably designed. You need to be looking at efficiency of plan, of systems going into the building, of embodied energy in the materials you’re using.”

Make it work for luxury

As a case study for such long-term thinking, Gilbert cited the Hotel Vier Jahreszeiten Kempinski Munich, originally built as a guest house for the Bavarian royal family, and currently entering the final stages of a decade-long refurbishment programme.

“We had to undertake the renovations because the building systems were basically failing,” Gilbert explained. “Many had been originally installed in the 1960s and 1970s and, to replace them, we essentially had to deconstruct it, install new systems and rebuild.

“When briefing the design team, we would never have said we want the concept to be ‘sustainable’. What we were asking for was the delivery of fantastic spaces that would provide unique experiences, and for a wide array of guests within the confines of an infrastructure that has been there for 150 years.”

But sustainability did factor into all decisions, however big or small – even if such considerations can appear to be in direct opposition to the traditional connotations of the five-star experience. “The concept of sustainable luxury can seem challenging,” Gilbert acknowledged. “You’re inherently looking at how to deliver luxury into these spaces, and the classic answer would have been ivory, ebony, mahogany and so on from all over the world. Now it’s more a question of studying one’s locale. We’re also trying not to use new pieces that require a manufacturing process in order to increase embodied energy; finding and buying antiques, rather than going to manufacturers. This is not because we’re mandated to do so – it’s the right thing to do, both from a sustainability and design perspective.”

It is not just a solution for luxury hotels, with Gilbert citing both 25hours and The Hoxton as brands that make great use of reclaimed furniture and materials. Such a degree of flexibility and creativity was something that also greatly enthused the next speaker of the evening, architect Dexter Moren, whose eponymous practice specialises in hospitality projects.

“It’s an incredibly exciting time to be working in this market,” he began. “A lot of this comes down to the blurring of lines regarding what is and isn’t a hospitality space. It used to be: this is an office, a hotel, a café, a residential space. Life isn’t like that, and the barriers have begun to melt away.”

Much of Moren’s discussion focused around the idea of hotels as community hubs – spaces that sought to engage rather than enclose. He profiled a number of recent projects that Dexter Moren Associates had delivered along these lines, including The Curtain in east London and the Hotel Indigo Kensington, as well as the recently opened Vintry & Mercer, a 92-key property in the City of London where, upon a visit that very afternoon, the hotel’s general manager had informed him the average room rate was up to £460 a night.

“It speaks to the excitement you can create in spaces just through unique design,” he said. “People want something different, inspired by and integrated with the surrounding area.

“The mixture of elements – working, retail, F&B [food and beverage] and so on – is really the lifeblood of the city. We still talk to town planners, and they’ll tell us, ‘Actually, this area has been designated for office space’. Are you mad? This is where people want to be, in the middle of things, a lively, active space. And that’s sustainability. It’s sustaining a city, sustaining life.”

With so many opportunities within hospitality, Moren felt a number of architects were entering the segment without a full appreciation of its nuances. Operators were not immune from criticism, either, as he discussed a property he had designed in Cape Town for Accor, only for it to end up being managed by a domestic group. “It was going to be a Novotel and Ibis, 500 keys, an entire city block designed with the new aspirations that Accor has for its properties,” he said.

“But, with the change of management, instead of engaging with the community as planned, they just shut everything off. Go to the Ibis in Cambridge, for example. You enter a buzzing brasserie. As a guest, the barista might check you in. That’s what hotels should be – the lifeblood of cities.”

It was an idea that certainly chimed with the evening’s third speaker, Giovanni Manfredi. The managing director of Aermont, an asset-management business with €6 billion invested across Europe, was heartened. “We come at the same problem from different perspectives – operator, architect and investor – but so much of what has been said resonates very strongly with me,” he said. “I share in particular an excitement about hospitality design. We are so lucky to be working at a time when the world is really changing, and everything, to some degree, is becoming hospitality now. In change, we see opportunity.”

“As a guest, the barista might check you in. That’s what hotels should be – the lifeblood of cities.”
Dexter Moren

The two main investment case studies that Manfredi focused on served to highlight the breadth of said opportunity: Manifattura, the €200 million redevelopment of a 100,000m2 former tobacco factory on the outskirts of Florence; and The Student Hotel, a mixed halls of residence and short-stay hotel concept headquartered in Amsterdam, in which Aermont owns a controlling stake.

“We recognise that hotels are changing and people are looking for something different: experiences, authenticity, uniqueness,” Manfredi explained. “And we like working with existing buildings – it’s a more sustainable approach, among other things. We need to understand the raw materials we’re working with – the location, the people who live there, the dynamics of the area – and create a concept around that, rather than bringing in a concept created elsewhere.

“By going through this process, you create something more authentic simply by being specific to the location. Also, purely from an investment point of view, if you do manage to bring out what the building has to offer, rather than imposing function or meaning, it costs less.”

Manfredi acknowledged that it was only after embracing the challenges and differences of Manifattura, from window sizes to ceiling heights, that the project truly began to take on form and meaning. The site incorporates restaurant, work, retail, cultural, hotel and residential spaces, with the team introducing concepts such as street food stalls to engage the surrounding citizenry. That idea of consolidating and building a community for hotel guests to discover upon arrival also applies to The Student Hotel, where guests and residents share amenities and public spaces.

“We want to recycle whole buildings, and technology also lets us do incredible things in areas such as retrofitting and energy conservation, but these are elements that have been discussed to exhaustion,” said Manfredi. “One aspect that is less talked about, but more important than people realise, is social sustainability. We have to be very mindful of the risk of landing spaceships in places that don’t belong.

“Architects, operators, investors – we need to really focus on making sure whatever we do is sustainable within the social fabric of the location. The impact we make is huge, but we can dictate whether that impact is positive or negative. I encourage everyone to involve communities in how we design and utilise our hotels.”

It was a point Gilbert agreed with, though he believed that for designers, such aspirations were not always backed up with actions. “You still see a lot of furniture showrooms,” he lamented.

“That’s all too often down to operators rather than designers,” countered Moren.

“It’s a combination,” Gilbert allowed. “Often, designers only show a superficial understanding of the social fabric, but some brand-owners are certainly too stringent on brand standardisation: ‘This is how we do things.’ You won’t survive long term taking that approach any more.”

It was a fitting note on which to close. After all, sustainability does not only apply to environmental concerns, but also business practises and strategy. Those that fail to recognise the significance of changes regarding responsible development and operations risk imminent extinction. 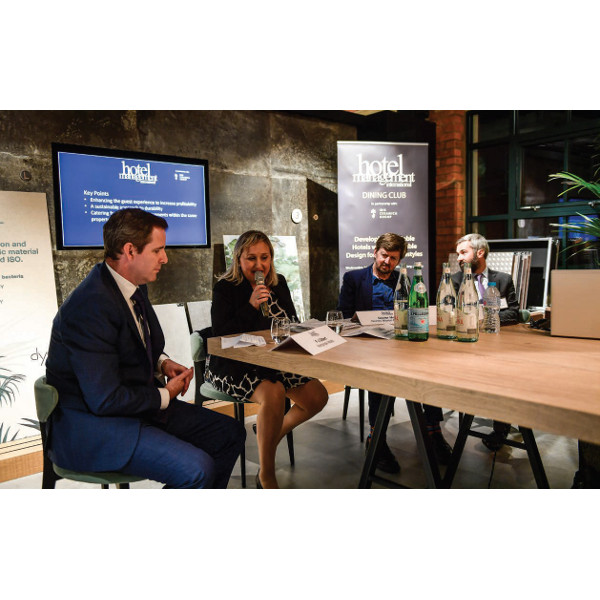 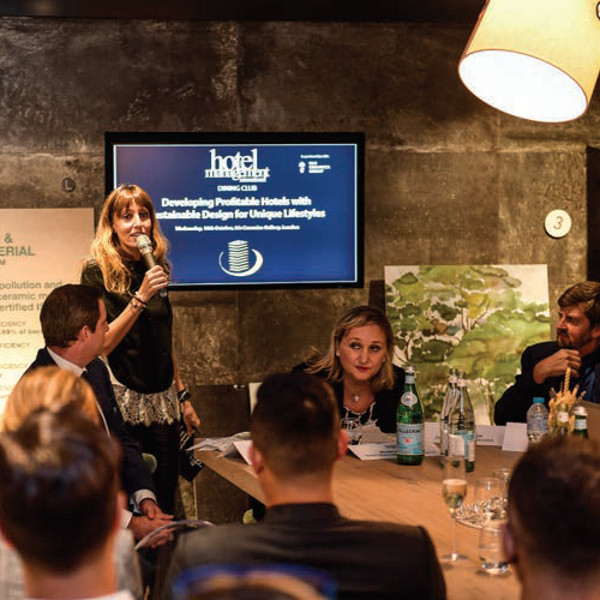 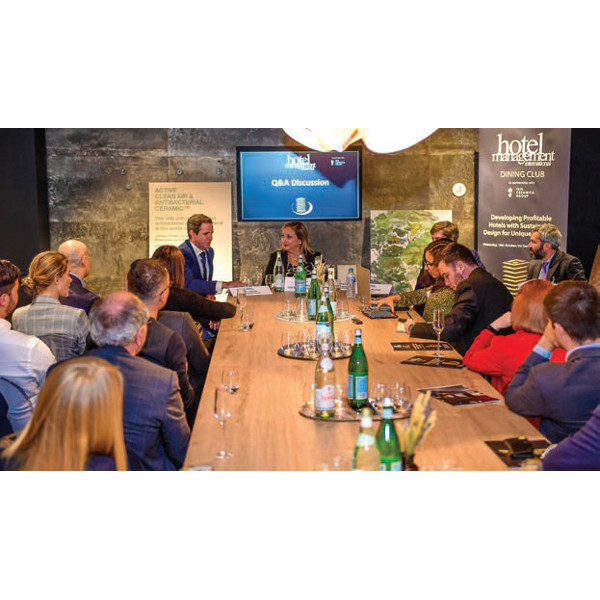 The discourse tackled all the key nexus points between hospitality and sustainability.
Post to: