Modular construction techniques offer a new way for developers and operators to not only minimise costs but also innovate in the use of room space. Greg Noone talks to Concrete’s Rob Wagemans, Jason Brown of Yotel and Hilton Worldwide’s Patrick Fitzgibbon about how off-site manufacture is fast becoming on trend.

When the designers at Concrete were asked to consider the experiences they’ve had at a luxury hotel, the mood at the firm darkened. “We felt we’d be better off at a youth hostel, because that’s where we find the social connection between guests as being the most interesting,” explains Rob Wagemans, the company’s founder. “If you go to a five-star hotel today, you have to pay a lot of money; you have to place your signature everywhere. If you want to order a beer, you need to fill in three forms.”

In 2007, Concrete found a partner to right these perceived wrongs: citizenM, an experimental new hotel group that aimed to offer, in its own words, “affordable luxury for the people”. The first result of that collaboration was the group’s eponymous property at Amsterdam Schiphol Airport.

“We started with the idea, ‘How can we make luxury affordable?’,” recalls Wagemans. From there, the architect and his team would radically reconsider what was actually required inside the room itself. “We imagined having a typical five-star bedroom  and a sharp knife, and we started to cut out everything we did not need. Then, at a certain moment, we came to the conclusion that we could go as little as 15m2 in area while still retaining a great bed, shower and toilet; and a small desk.”

When it came to answering the question of how this vision could be efficiently put together, Concrete turned to modular construction, an assembly method whereby parts of the building are put together in a factory, shipped off to the site on a cargo vessel or the back of a lorry, and then carefully slotted into a steel or concrete superstructure. To expedite the logistics of transporting the rooms, Wagemans decided to confine his design to the dimensions of  a shipping container:

“Then we felt we had something that is easy to build anywhere  in the world – we can ship it anywhere  we like, we can put it on a truck, build it anywhere, crane it in and we’re done.”

Ultimately, Wagemans and his colleagues believe that the design they’ve conceived with citizenM has contributed to a new paradigm in room design, where luxury can be attained without recourse  to surplus space. “If you go to a city, all  of your hotels are too expensive or shitty,” he says. “Why can you not make an affordable hotel that has the luxury you need without all the bullshit you don’t?”

CitizenM is just one of many hotel groups that have chosen to design new builds with modular construction techniques in mind. In the US, Hyatt recently announced that work had commenced on a new mid-scale offering in Oklahoma City that would see most of its rooms assembled in Boise, Idaho. Meanwhile, in the UK, Hilton Worldwide has partnered with the Chinese shipping container manufacturer CIMC to build a new Hampton by Hilton at Bristol Airport. In keeping with Hilton Worldwide’s leasehold business model, CIMC will be the owner and developer of the Bristol site. Put simply, the Chinese manufacturer offered the hotel group a turnkey solution that it had been seeking to implement for years.

“Across many of our hotels over the years,” says Patrick Fitzgibbon, Hilton’s senior vice-president for development in Europe and Africa, “you’d find the bathroom component was modular, so we’ve worked on and used the technique in our developments for a long time.

“But in terms of effectively building almost the whole hotel other than the public areas, this is the first time we’ve ever gone down that route, certainly in markets outside of the US. I think one of the reasons is that we just hadn’t found a solution that met all the criteria, particularly when it came to quality.”

Nevertheless, the modular concept Hilton has devised with CIMC can only accommodate rooms up to a certain size, meaning that, at the moment, it’s really only compatible with Hilton’s ‘focused service’ brands: Hampton by Hilton and Hilton Garden Inn. “The room size in those hotels is such that you can easily transport the sections by road,” says Fitzgibbon. “As soon as you go to upscale or luxury hotels, the room size is such that it’s likely this methodology just doesn’t pay. The roads, bluntly, are not big enough.”

However, as far as Fitzgibbon is concerned, the efficiencies to be found in modular construction constitute a major opportunity in Europe and Africa for its burgeoning economy-brand development pipeline. “A lot of people said it’s quite a surprise to see it in Bristol, but it makes perfect sense,” he says. “It’s great – because the construction’s much quicker, there are fewer vehicles at the site, which is good because, like any airport, it’s already a very busy area. Whereas I think in a market like Africa, it resolves a lot of the challenges in terms of the availability of experienced and qualified labour, as well as the availability of materials.”

Ultimately, however, Fitzgibbon is less inclined to regard modular construction as an influence on Hilton’s brands; his interpretation is more literal. “Our guests won’t know the hotel is modular – and they don’t need to know,” he says.

“It’s just a form of construction and, ultimately, what we need is for them to walk into one of our properties and go, ‘Wow, what a great hotel!’. How it was built is irrelevant. The relevance there is really for the owner and the development community, to use modular construction as a tool to expedite growth.”

However, while modular construction promises a turnkey solution for new builds, its most prominent successes have been in locations that might be regarded as peripheral. Although Concrete and citizenM have continued to collaborate
on new projects in London and New York, the impact of modular hotel design in dense urban areas has been predictably limited; dropping prefabricated rooms into a steel framework becomes a much more expensive, impractical option when an operator decides to move into a major city.

Arguably, no operator knows this better than Yotel. Founded in 2002 by British businessman Simon Woodroffe, the operator’s trademark brand of purple-tinted cabin rooms were indirectly inspired by the smaller capsule hotels the entrepreneur encountered during his trips to Japan. While he didn’t think the space on offer would be acceptable for guests in the West, Woodroffe nonetheless saw potential in building an affordable boutique hotel brand able to incorporate 50% more rooms than its nearest rivals.

The operator has come a long way since building its prototype structure in 2003. While that demonstration model saw 2.7×13.0m capsule rooms slotted into a steel frame, Yotel has pared back its initial enthusiasm in keeping almost every aspect of construction totally modular.

“When we go into many of these different regions around the world, [modular] is actually more expensive unless you have a factory within striking distance of the site,” says Jason Brown, the operator’s chief development officer. “We’re very interested in it, but we don’t want it to hinder our ability to flex into those locations, because that is a real hindrance to scale.”

Yotel has instead focused on delivering something closer to a modular experience, defined by what the operator calls the ‘kit of parts’. “There are must-haves in the Yotel experience,” says Brown. “That includes what we call ‘mission control’ and our check-in-kiosk experience. Then we have the cabin itself and a concept we call the ‘club lounge,’ which is really a vibrant, co-working space for people to relax and have a drink before they go to a premier restaurant, which may or may not be incorporated in the hotel. That kit of parts delivers what we think is the ethos of the brand.”

Nevertheless, there are subtle compromises to be found in Yotel’s new urban developments that do affect the sense of modular uniformity the brand attempts to convey. The operator’s latest signing in San Francisco’s Grant Building, constructed in 1905 by the same father-and-son team that built the Brooklyn Bridge, saw the operator mount extensive consultations to not only preserve its kit-of-parts design principle but also ensure the new hotel’s successful integration into the local community. Similarly, in regard to Yotel’s new signing in Dubai, Brown is clear that the rooms, cabin and public spaces conform as much as possible to market conditions in the UAE.

“We may end up, in some scenarios, making design decisions that seem more modular than we typically would do across the board, but that flexibility in deciding what’s best for specific sites is key,” says Brown. “It allows us to grow very quickly and ensures we’re not insular – that we don’t just think we have the best ideas all the time. We’re very open  to developers and investment partners having great ideas, and trying them out.”

It is perhaps these kinds of trade-offs that will serve to define the further spread of modular construction techniques throughout the hospitality sector. While resorting to prefabrication might lead to restrictions on the size of rooms and where hotels can be situated, it has also opened up new options for operators regardless of whether those methods
can be used in the construction process. As Yotel and citizenM have demonstrated, guests don’t perceive the luxury option simply as involving large rooms and bespoke service – smart technology and the efficient use of space also count. 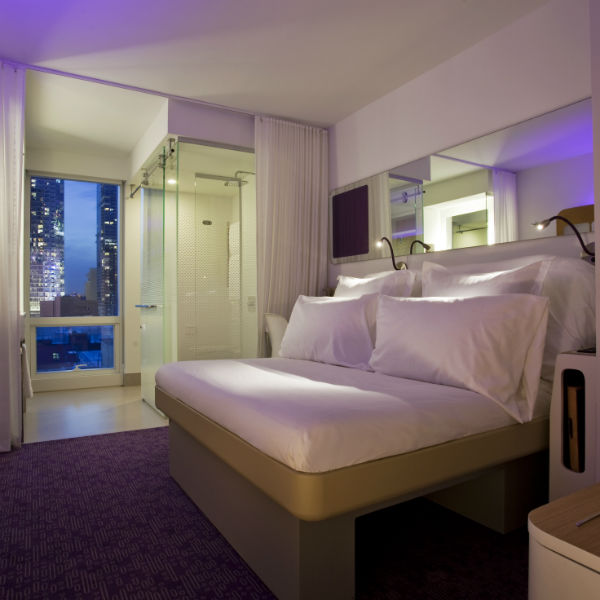 With citizenM, Concrete has designed modularly constructed luxury rooms pared back to as little as 15m2.
Post to: