A kingdom of possibilities

For decades, millions of people have flocked to Saudi Arabia each year as Muslim pilgrims to the holy cities of Mecca and Medina. Now, with the government eager to diversify the national economy away from oil and gas dependency, hotels and hospitality ventures are sprouting up all over the country. Andrea Valentino speaks to experts across Saudi hospitality to learn how the kingdom’s long heritage of Islamic tourism is shaping a new era of luxury hotel, and how the very structure of Saudi society will need to change if the revolution is to thrive.

For most of its history, Mecca was a backwater. As recently as 1900, nearly fifteen centuries into the Islamic experiment, barely 40,000 people lived here. Those faithful Muslims who came from overseas travelled by horse or camel, wobbling across the desert in snaking caravans. When they arrived, they slept in tents, weaving past chilli-coloured medieval towers towards the holy places in the centre of town. Even during the hajj – the most auspicious time of year to visit – Mecca was a sleepy place. Sepia photos from the dawn of the 20th-century show just a few thousand pilgrims crowded together, flanked by a crumbling Ottoman castle and a mosque.

This old Mecca has disappeared, and it has been replaced by the Abraj Al-Bait. A $15bn tower, 601m tall, the complex hangs over the city and the kaaba like a cloud of dust. It has seven hotels, a shopping mall and a carpark capable of hosting over 1,000 vehicles. This is the Saudi Arabia we know: wealthy, thrusting, striving to wash the past glories away like errant grains of sand. To complete the Abraj Al-Bait, after all, the authorities demolished the Ottoman fortress in the photo, originally completed in the 18th-century. Yet missing from this shining world of Saudi hospitality, with its spas and concierge service, was anything as frivolous as tourism.

The cost of the Abraj Al Bait in Saudi Arabia that hosts seven hotels, a shopping mall and a carpark.

The number of hotel room promised by 2030 as part of $575bn investment in new tourist facilities.

Nowadays the kingdom is moving. Desperate to escape their unsustainable marriage with oil, the country’s leaders are welcoming a new type of traveller. That also means welcoming a new type of hotel. Building on a long tradition of pilgrimage, Saudi Arabia is pushing ahead with dozens of properties, aimed squarely at sophisticated, adventurous foreigners. Hotel operators are rushing to keep up, the breadth and luxury of their investments testament to how serious their plans have become. By 2030, after all, Riyadh promises to build 100,000 hotel rooms, part of a $575bn investment in new tourist facilities. Not that this new world can be made from nothing. With much of the country’s population unfamiliar with hospitality, there’s plenty more to do.

Every year, a human wave comes to Saudi Arabia. In 2019 alone, 1.8 million foreign pilgrims visited during the ten holy days of hajj, while another 7.5 million made the trip the other 355. And as the Abraj Al-Bait gaudily implies, the kingdom’s princes have only been too happy to accommodate this influx. When holy tourists finish the day’s devotional rituals – circling the kaaba, or visiting the hill where Muhammad gave his last sermon – they can unwind at properties like the Fairmont Mecca. Billed as a “beacon” for pilgrims, the hotel offers eight meeting rooms, five restaurants, and a steam room. Given this luxury, it’s worth asking why the kingdom has historically avoided developing a parallel, secular tourism sector. In part, the answer comes down to the Saudis themselves. As happy as they were to embrace Western saunas, welcoming Westerners themselves was another matter, with tourist visas nonexistent until 2019. This was also shadowed by the country’s social norms. Between a female driving ban, public executions and a religious morality police, the only non-Muslims who visited the kingdom tended to be businesspeople and diplomats.

Fortunately for enthusiasts like Imad Sawaya, vice president of business development for the Middle East and Africa at Kempinski Hotels, this image is changing. With Saudi’s oil reserves expected to run dry in about 200 years – even as they continue to contribute 62% of GDP – the country’s rulers have started diversifying. Known as Vision 2030, a new scheme promises a “unique transformative economic and social reform blueprint that is opening Saudi Arabia up to the world”. In practice, that means relaxing many of the kingdom’s stricter laws: among other things, women can now drive and cycle around the country in peace, while would-be tourists can apply to a three-month visa online. That’s echoed by a flurry of new tourist hotels. According to a recent study by hospitality data group STR, the kingdom currently has a pipeline of some 73,057 new rooms, spanning the gamut from Radisson to Hilton. That’s expected to increase the national room capacity by over 67% – the highest among the world’s 50 most populated countries. Of course, this frenzy would mean little if Saudi Arabia had nothing to offer tourists. Yet as insiders like Sawaya imply, the country’s natural and man-made marvels are worth travelling for. Noelle Homsy, co-founder of ENVI Lodges, a luxury hospitality firm, highlights Saudi’s spectacular landscapes. Along the Red Sea, in the west, sit pristine coral reefs and beaches the colour of milky coffee. Further inland are deserts, and rugged mountains hosting leopards and oryx. Saudi Arabia is just as full of historical wonders. At Al-Ula, perched on a rocky outcrop north of Medina, lies a Unesco World Heritage site built by the Nabateans at the time of Christ. Then there’s Saudi Arabia’s idiosyncratic culture, shaped over centuries by Bedouin nomads. “Besides visiting the Unesco World Heritage sites,” says Homsy, “explorers can authentically interact with the locals, eat their food, farm and fish with them and listen to their stories – all of which make Saudi Arabia an attractive destination for tourists to discover.”

When it opens in 2023, InterContinental Resort Red Sea promises to be one of Saudi Arabia’s most spectacular hotels. Each of the property’s 210 rooms will face the ocean, allowing guests to hop from their bedrooms to the surf in a matter of seconds. The resort will feature over half a dozen restaurants, several swimming pools and a sprawling health club, all flanked by sweeping views of uplands and deserts and the gentle turquoise sea. “We are delighted to partner with the Red Sea Project to build the new generation and brand defining InterContinental Resort Red Sea,” says Haitham Mattar, the IMEA managing director at IHG, InterContinental’s owners. It’s a monumental scheme of which the InterContinental property is only one part. All told, the Red Sea Project encompasses around 50 islands, and over a dozen hotels.

Beyond the InterContinental Resort Red Sea, there’s the Grand Hyatt hotel on Shaura Island, shaped like a coral bloom and boasting an 18-hole golf course. Nestled in rolling sand dunes, for its part, is the Desert Rock. Among other things, guests will be able to explore the wilderness on dune buggies, and enjoy educational tours from local Bedouins.

This mix speaks to the kind of visitor Saudi Arabia hopes to attract. Sawaya puts the balance well when he says tourists want “unprecedented and luxurious experiences in combination with history and culture”. Saudi hospitality could ultimately end up towards upmarket beach holidays in the style of Oman or the Maldives. And while experiences like Bedouin excursions are obviously designed for curious foreigners, Saudis themselves seem likely to feature too. “It’s no secret that a major source of tourists to Saudi’s tourism developments will be the domestic and regional markets,” says Homsy, “at least for a few years until the international tourist influx ramps up to significant levels”. This is clear in the numbers, especially in light of the pandemic. According to one poll earlier this year, 80% of Saudis planned to travel domestically in 2021.

Saudi Arabia is one of the youngest countries on earth. 37% of the population is below the age of 14, and three-quarters are younger than 30. These are people raised, moreover, in one of the most generous benefits systems on earth. Education and healthcare are free, the subsidies lavish, and the jobs, often in sluggish government ministries, plentiful. To put it another way, this is a generation broadly unused to the rigours of work. Though Saudi Arabia currently hosts around ten million foreign guest workers, after all, the ongoing hospitality boom is aimed at giving opportunities to native Saudis. The Red Sea Project, to give one example, could one day provide jobs for 35,000 people. Could – but not will. To ensure they do, Saudi society will have to change into one where service isn’t seen as shabby or demeaning. That means developing the infrastructure to go with swanky new hotels, including airports and roads, of course, but also schools. “The success of the tourism and hospitality sector will depend on the progress of other public service sectors,” Homsy argues, “all of which serve each other’s growth.” To be fair, there are signs that the country is moving in the right direction. Sommet Education, the famed Swiss hotel school, signed a deal with the kingdom’s Tourism Development Fund. The kingdom has also investigated the power of educational apps.

Nor is state intervention limited to education. Though foreign operators are rushing to the peninsula, the authorities in Riyadh clearly have a hand in where they go. Apart from boosting the national coffers, investing in hospitality offers Saudi Arabia’s population a genuine future without oil. Yet if this means foreign multinationals have to split their profits with the state, immense projects like the Red Sea Project would probably be impossible without princely munificence. At the same time, Mohammed bin Salman, the country’s de facto leader, seems happy to keep signing cheques. A case in point is Amaala, planned for the Red Sea coast near Jordan – a “megaproject”, which promises 2,500 hotel rooms, 700 villas and 200 shops, galleries and marinas. It’s perfect, in short, for a hotel firm in a hurry. Comparing the Abraj Al-Bait to those forgotten sepia shots of Mecca reminds us, at least, of how quickly things move when money’s on the line.

The new rooms spanning the gamut from Radisson to Hilton, that’s expected to increase the national room capacity by more than 67% – the highest among the world’s 50 most populated countries.

The number of years before Saudi’s oil reserve runs dry. 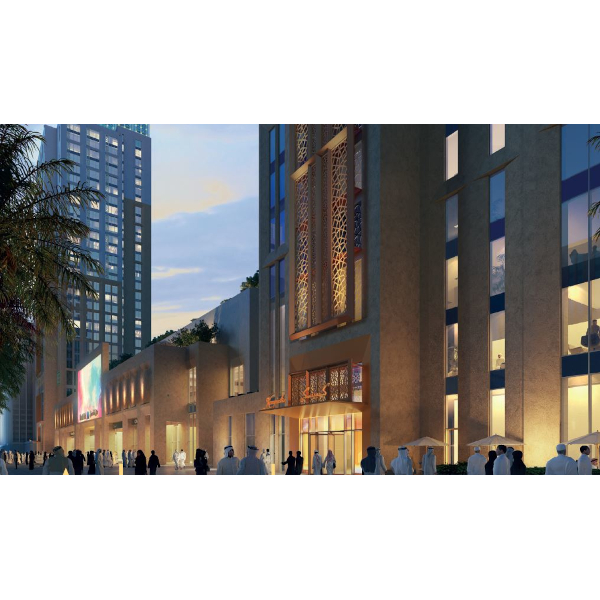 The entrance to the Kempinski Hotel in Makkah, Saudi Arabia.
Post to: