A hotel for the ages

Having closed for a €200-million renovation more than four years ago, Paris’s legendary Hôtel de Crillon, under Rosewood’s management, is once again open for business. The project’s artistic director and founder of Culture in Architecture, Aline d’Amman, and Affine Design’s Richard Martinet speak to Bradford Keen about the delicate act of preserving history while introducing the 21st-century elements expected in a luxury property.

During its 259 years of existence, the Hôtel de Crillon has hosted royalty and dignitaries, world leaders, singers and writers. Marie Antoinette practised piano in one of the grand rooms and was beheaded outside. Former US President Bill Clinton and Madonna stayed at the hotel – not together – and, in a different era, Ernest Hemingway drank at the bar while soaking up inspiration for his novel The Sun Also Rises.

It has witnessed watershed moments in global politics. Benjamin Franklin signed the Franco-American treaty in 1778 in one of the antique salons that have earned the status of national historical monuments, while Winston Churchill and Woodrow Wilson put their names to the treaty that gave rise to the League of Nations in 1920.

Of course, the Hôtel de Crillon has not always been a hotel. It was originally built in 1758 under the orders of King Louis XV, according to French architect Ange- Jacques Gabriel’s designs. Three decades later, the Duke of Crillon bought the building, and temporarily lost it to the government of the French Revolution in 1791, just two years before the deaths of Antoinette and King Louis XVI. The property was eventually returned to the Crillon family, who lived there until 1906.

The Société du Louvre opened the Hôtel de Crillon in 1909 after a significant rebuilding project under the watchful eye of architect Walter-André Destailleur. Starwood Capital took ownership in 2005 and sold it five years later to current owner Prince Mitab bin Abdullah bin Abdelaziz al-Saud for €250 million. Closing in 2013 for a four-year-long refurbishment project, the hotel opened for business on 5 July 2017 under Rosewood’s management.

“Working on such a beautiful project, you realise the responsibilities you have, especially as a foreigner,” says Lebanese architect Aline d’Amman, who led the creative direction at the hotel. However, the founder of Culture in Architecture feels qualified, having held France close to her heart since studying in the country, and falling in love with its style and attitudes towards life.

A challenge for d’Amman was merging the building’s multiple identities of its 18th-century structure and facade with its 19th and 20th-century layers to bring it into the 21st century. The designers and architects wanted to respect history and heritage, but also “create a scenario for the travellers of tomorrow by bringing comfort and the sensation of joy, discovery and emotional crescendo”.

Longevity is important to d’Amman and it requires so much more than simple decor to achieve: “It’s about creating an emotion and, when it comes to a heritage building, the emotion is already there because it comes from the memory of the place.”

When refurbishing patrimonial projects, it is good practice to consider all the players involved. The original architect, while no longer around to see the adaptation of his or her work, should be remembered, the plans of subsequent designers and architects need to be implemented while various governmental and cultural bodies keep watch over the conservation of the building’s history.

One such notable person gracing the halls of the Hôtel de Crillon during the past four years is project architect Richard Martinet, co-founder and director of Paris-based Affine Design. The core of his work involves restoring historical landmarks, which include the Four Seasons George V, the Hôtel de la Tremoille, the Peninsula Hotel Paris and the Shangri-La Paris.

Projects such as these require balance between the contemporary and traditional, Martinet says, while finding new solutions that appeal to timelessness.

However, as Martinet notes, while the integrity of the 18th-century facade, and the architect and designers’ work in 1909 need to be protected, the Hôtel de Crillon is a luxury property that should have a contemporary interior worthy of its status.

“The most important issue is the final profile of this hotel,” says Martinet, which, in his eyes, can be divided into two main design concerns: scale and history.

With only 124 keys – 81 rooms, 33 suites and ten signature suites – the Hôtel de Crillon is intimate, which is precisely the feeling architects and designers wanted to impress upon guests.

Look to the past

When Martinet and his team arrived on the scene, he found a confusing building. More than two centuries old, rebuilt over 100 years ago and renovated many times in between, they needed to clear the layout of the building, which in parts felt cramped and dim.

Referring to design practices of those that came before, Martinet says, “We have to think how designers were using dark colours. Natural light was a sort of enemy and now it is completely the opposite.” The contemporary team exploited the power and desirability of natural light in previously unlit spaces, and used it to connect the hotel’s public areas.

When it comes to the second design concern, Martinet says he wanted to pay homage to bygone days “without being too bothered by history”.

Each design should promote the idea that “everything has to be contemporary without compromise”, which means Martinet does not try to redesign aspects of the building to appear historical. “We have two options: restore the historical finishes, or, if it cannot be restored, dismantle it and do something new with a straightforward contemporary design.

“We have a duty never to destroy decors if you can save them instead. I try my best not to break the links with history and, after that, take into consideration the renewable parts of the building to enhance it.”

The Hôtel de Crillon lays claim to three reception rooms classified as national historical monuments: the Salon des Aigles, the Salon des Batailles and the Marie Antoinette music chamber. With 6m-high gilded ceilings, tinted halls, and deep tones of white and beige adding to their overall grandeur, d’Amman stresses it was essential to use clean lines “to create tension” between past and present.

“We want our buildings, whether hotels or residential, to feel comfortable and be liveable,” she says, “so it means all of these parameters have to be taken into consideration, and coordination not only has to be very subtle in order to preserve and conserve but also create a hive for today that lasts for tomorrow.”

New features such as a spa and swimming pool required excavation of the hotel’s basement. Bathing the area in natural light from a skylight in the second of two courtyards and cultivating an urban garden that bends over swimmers in the pool, the designers have created modern and inviting spaces.

There are a lot of contemporary materials and ways of reinterpreting traditional construction methods when renovating a property. An example Martinet cites is how some of the walls Event planning In the historical salons that are to be used for events, d’Amman wanted to establish a permanent scenario able to transform them from a residential setting to a venue equipped to host runway shows or large dinners. Permanent furniture needed to be flexible and multifunctional. A large cabinet door, for instance, can be used as a stationary or dry bar, or when closed it is a block of mirrors to echo the beautiful settings in the room. This required “micro architecture” within a large architectural space, d’Amman says, and relied on “clean lines and pure geometry with very strong handcrafted materials”.

This can be seen in the wood carving on door panels turning them into timeless art pieces paying homage to 18th-century tapestry.

Being situated in the heart of Paris, which d’Amman calls “the city of life, passion and creativity”, she wanted to celebrate the spirit of France and the vision of Versailles by gathering many talented people to work together, such as local designers Cyril Vergniol, Chahan Minassian and Tristan Auer.

However, it was d’Amman’s deep desire to collaborate with a leading creative figure in Paris that led her to write by hand an invitation to Karl Lagerfeld, asking him if he’d be interested in designing a suite in the hotel.

The fashion designer, who shares d’Amman’s love for calligraphy, called the number at the end of the note, but d’Amman had left her mobile phone out of reach. Returning to a voice message commending her elegant letter, Lagerfeld suggested she keep her phone in hand as he would be calling in 30 minutes, which felt like “rollercoasters in my heart”, d’Amman recounts. As the clock struck, the phone rang. He said yes.

Lagerfeld is responsible for designing the Grand Apartment suites on the fourth floor and, according to d’Amman, he is an icon befitting the stature of the Hôtel de Crillon.

Heritage projects can evoke strong public opinion that often splits between those fearing the loss of history and those willing the next iteration. However, Martinet says he has found opinion unanimously in favour of evolution.

It was always going to be a job that required a deep appreciation for the past with finesse for the future. More importantly, at least to d’Amman, she let beauty be her guide. “I really believe seeking beauty is a noble cause that’s not about the decor or just doing your job, it’s about elevating the soul and creating social behaviours to become a better person.” By striving for beauty and evoking emotions as the higher vision to drive the whole process, d’Amman says it is easier to make sense of the technical and operational demands.

The Hôtel de Crillon has played host to the birth of political epochs, provided inspiration and liquor to great authors, and offered sanctuary to presidents and pop stars alike.

After four years of hitting pause on its rich story, the time has come for the next generations to make memories and mark moments within the iconic property, while beauty continues to lead them into the future. 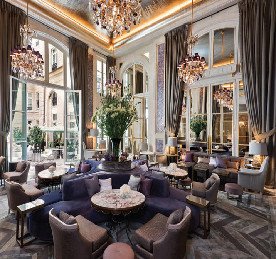