Despite the ongoing uncertainty around the pandemic, some things remain certain, including the growing interest among investors and property planners for high-rise mixed-use developments (MUD). These vertical villages, already popular in Asia, build upwards to accommodate a growing urban population, and cater for work, home and entertainment. Jim Banks speaks to high-rise MUD experts about how these structures will shape urban living, and what role hospitality can play within them.

It’s no secret that Covid-19 has caused many to radically reconsider how they live and how they work. During a seemingly endless pandemic, many people have got used to working at home and have no desire to commute to work every day again. Others seek to adjust their work/life balance and have more flexibility to blend home with work. This will have a profound effect on the use of large buildings in city centres.

The ‘Forecast 2021’ report from global architecture, planning and design practice CallisonRTKL predicts that existing assets will be repurposed and ownership will change as savvy investors swoop on deals. It further suggests that mixed-use developments (MUDs) that include hotels will rise in popularity, as they provide investors and developers with an opportunity to de-risk assets, repurpose underperforming stock in their portfolios, and create local, multifunctional hubs based around communities and consumers. A MUD enables a hotel operator to focus on specific groups of travellers, while developers can target a range of retail outlets, office tenants and residents. For the hospitality sector, being part of a MUD can improve sales by bundling packages and services for residents, workers and short-stay guests, greatly broadening potential revenue opportunities. Indeed, the concept of the MUD is well-known but it increasingly has a new form – the high-rise MUD – which embodies a new model for densifying inner-city sites in a sustainable, profitable and versatile manner.

“There are fewer options for building a one million square foot office building now, so the answer to how to make economies of big buildings work is MUDs,” says Todd Lundgren, EMEA managing director of CallisonRTKL. “There is still an interest in creating iconic large developments, and vertical MUDs can create real value.”

Back in the east

When a large development relies solely on a single tenant type, the entire building is at risk if that sector slows down. Covid has left many cities with swathes of empty retail and offices. MUDs can reduce risk and create a localised ecosystem that feeds off itself and operates more like a circular economy – homes bring residents and hotels bring guests, each in turn delivering a ready-made audience to local amenities.

“There are so many advantages for developers in having multiple users in a high-rise building,” says Lawrence Adams, principal at hospitality design firm Forrest Perkins, which specialises in luxury and landmark hotels, resorts, spas and multi-residential projects worldwide. “The result is always greater than the sum of the parts.”

Adams has more than 40 years’ experience in the design of large-scale development projects. Most recently, he directed the design of the adaptive reuse of an iconic mid-century high-rise for the 326-room Westin Dallas Downtown Hotel, which opened in 2015.

“Land assembly is more efficient: there can be shared parking and other amenities, as well as shared financing and construction costs,” he remarks. “If one component underachieves then the development benefits from others that can pick up the slack. If one element of a MUD is not working, then the development as a whole does not fail. They also fit with the ‘live, work, play’ trend in urban planning, helping people to avoid the commute to work.”

The trend for high-rise MUDs began in Asia, where China has led the way, and the Middle East is now a hotbed for development too. The concept is inexorably working its way westwards towards Europe and the US.

“We did a lot of work in China during the last global recession,” says Lundgren, who has been working on such projects for the last 15 years. “Every city wanted tall buildings to create the volume developers wanted, but few cities wanted 60-storey residential buildings, so they became MUDs.”

Located in dense urban areas where land costs are high – which justifies the spend on complex buildings – high-rise MUDs are the focus of growing interest in the US, and the UK already has some notable examples, not least The Shard.

Shard of an idea

From a 1970s office block to a landmark on the London skyline, The Shard was designed as a vertical city where people could live, work and relax. It is comprised of world-class offices, award-winning restaurants, the five-star Shangri-La Hotel, exclusive residences and the UK’s highest viewing gallery.

“The jury is still out on whether The Shard is an economic success,” says Lundgren. “There are fewer constraints in China and the Middle East, but in any location it is about curating the different elements to create synergy.”

In the UK’s second city, Birmingham, the £360m Curzon Wharf will be the world’s first MUD with a net-zero carbon master plan. Backed by the Woodbourne Group, a master plan of almost one million square feet will transform the urban neighbourhood and incorporate life sciences R&D capacity, as well as residential, retail, office and community elements in a city centre site currently occupied by industrial units originally constructed in the 1960s. It will be home to a 53-storey built-to-rent structure, a 41-storey student accommodation tower, and 14 storeys for co-living. A further 130,000ft2 of office, R&D and life science space, over 3,000ft2 of retail space, over 15,000ft2 of leisure space, and more than 76,424ft2 of new and improved public realm space will all be key elements.

In London, The Makers MUD in Shoreditch is a £110m regeneration project designed by Avanti Architects. It will combine a vibrant mix of public, residential and commercial elements, a commercial/ gallery space, a new special needs school, enhanced community sports facilities and a new public space for the local community. The residential accommodation is housed in a seven-storey linear street block and a 29-storey tower above a two-storey podium.

“The UK has been very focused on single-use assets for a long time, and developers tend to think in short-term or fixed models,” says Amir Ramezani, director of Avanti Architects. “They don’t want the complexities of different uses and tenants. That is why high-rise MUDs, until recently, have been more popular abroad.”

Ramezani, who frequently works on education, housing and regeneration projects, is a strong advocate for more flexibility and adaptability in buildings, embodied in his mantra “long life, loose fit, low energy”.

“Now, town centres, office buildings and retail are changing,” he observes. “Usually, there has been a split between commercial and residential developments, but the space can be reallocated to convert one to the other. Tall buildings lend themselves to MUDs, and developers in the UK are starting to look at blended business models to balance income streams, but they need the flexibility to adapt and change floors to different uses.”

Although it does not take up the most space in a high-rise MUD, the hospitality element plays a central role. Like the nerves and blood vessels that keep a human body alive, the hotel connects everything.

As well as housing short-stay or long-stay guests, hotels can provide services such as maid service or dining to serviced apartments, or provide access to facilities like gyms, spas and restaurants for residents and office workers. Their meeting spaces and conference facilities can be rented to the building’s commercial enterprises, and residents can put up visitors in the on-site hotel.

Hotel use may have to become far more flexible to benefit from the opportunities in a MUD, but in doing so they can stay committed to their core purpose – selling space and marketing a hospitality skill set.

“The ground floor is king,” says Ramezani. “It should be an open, transparent, publicly accessible space that allows footfall for commercial functions. Hotels have achieved that for a long time. They provide the living room for the building in a way, and they provide the sense that a building can be part of the local community. They add a lot of richness compared with a bland single-use building.”

“The hotel benefits from a captive market in the other users of the MUD,” adds Adams. “Market forces are creating demand for these MUDs with upscale hotel, retail, residential units and office space. For hospitality, there is even an opportunity for dual-branded hotels. Two brands – one for short stays and one for long stays – in the same building could share back-of-house facilities, administrative functions and mechanical systems, which lowers costs.”

Covid-19 has changed working habits and the use of office space. High-rise MUDs can offer flexibility, either with shared office space as part of a residential development, or the use of dedicated office space a few floors away from a residence. Converting existing office space to residential or hospitality space has its challenges due to the difference in layout and column spacing, but both new build and converted high-rise MUDs are set to be a growing feature of city life. In both, sustainability will be a key part of the design.

“Sustainability is increasingly important, and we have to consider how to design the facade to use wind, shade and ventilation to drive energy efficiency,” says Lundgren. Adams agrees, arguing that there is real opportunity for sustainability, not just from shared infrastructure within a building and through exterior design, “but also from simply taking cars off the street”.

The future, then, will be defined by the ability of developers to adapt to a new business model that was growing long before a coronavirus started transmitting to Wuhan residents. Now, with the pandemic changing myriad facets of our working lives and social communities, adaptability feels like the inevitable way forward for developers. “The model will have to change from short-term revenue to a slow-money mindset,” Ramezani concludes.

The Xi’An MUD features a signature tower with 220-key hotel and serviced apartments. The development, by SCDA Architects, features two apartment towers, a retail podium and recreational facilities. The concept comprises a centre node with a civic character in an otherwise homogeneous residential urban plaza. It is situated next to parkland, which merges with the outdoor areas of the two sites.

The Nanjing Super High-Rise development was treated by 10 Design and is located in the centre of Nanjing, the ancient capital of China. The 430m-high building has a triangular floor plate and comprises retail, office and hotel components. Grade A office space occupies the lower half of the tower, along with a seven-storey podium for retail. 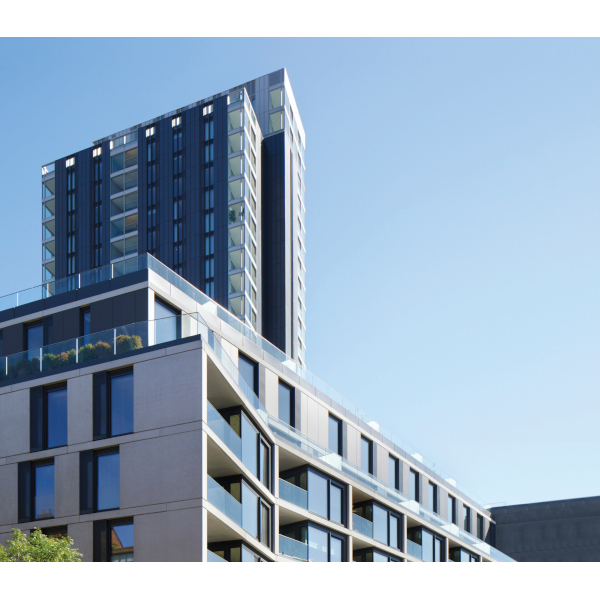 The Makers is a quintessential MUD structure, with a mixture of public, residential and commercial uses. 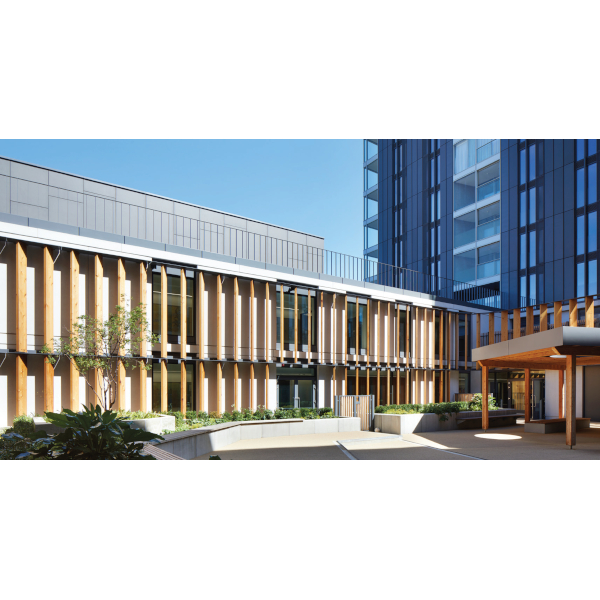 The Makers MUD in Shoreditch, London, by Avanti Architects.
Post to: