His portfolio may be expanding, but Marcus Wareing has no interest in seeing his name above the door of his new venture, the Gilbert Scott, instead paying homage to the building's architect. The Michelin-starred chef talks to Phin Foster about why a chance to be a part of the St Pancras Renaissance presented too good an opportunity to turn down.

Among the chattering classes that frequent London's fine dining scene, some of the most intense speculation has long surrounded Marcus Wareing and when he might finally decide to expand his interests beyond the Berkeley.

When Hotel Management International last met the 40-year-old owner of two Michelin stars a little over 12 months ago, he gave himself "another ten years or so" working full-time in the kitchen and said he would not be drawn on any plans beyond his ambitions for a third star, and to finally find the time for a few weekend breaks with the wife.

The dust had only just settled following a feud with one-time mentor Gordon Ramsay over the leasehold of what is now Wareing's eponymous Berkeley venture - Ramsay has since launched a new Petrus, the restaurant's former moniker, on the hotel's doorstep - and our interviewee was clearly just happy to focus on what had made that name in the first place: exemplary cooking. Here, we thought, was a man more than content with his lot.

Perhaps appearances were deceiving though, as within a year came the announcement many had been waiting for: Marcus Wareing was finally taking the plunge, launching a 120-cover restaurant at the St Pancras Renaissance Hotel. It was a suitably grand statement of intent in what some interpreted as the first stage in the pursuit of Ramsay-esque empire building. The Renaissance has been perhaps London's most eagerly awaited hotel opening in recent memory. A £150-million restoration of an iconic 245-room property that had long been referred to as ‘London's lost landmark', foodies had speculated intensely as to which superstar chef would be stencilling his or her name above the restaurant door.

"The first time I walked in, it instantly became clear that we needed to be a part of this, and to do the building justice it had to be about much more than ‘Marcus Wareing'".

But Wareing is nothing if not contrary, choosing instead to give top billing to the architect behind the building's construction in the 1870s. Furthermore, perhaps the finest English exponent of Michelin-friendly fine dining of his generation was to eschew the amuse bouches and ten-course tasting menus in favour of launching the Gilbert Scott as a "British brasserie", serving such hearty historical classics as Dorset jugged steak and Manchester tart.

This approach may seem counter-intuitive, but Wareing feels that the building gave him little choice. "It's difficult to describe, but there's just this amazingly grand sense of nostalgia about the entire place," he says. "The first time I walked in, it instantly became clear that we needed to be a part of this, and to do the building justice it had to be about much more than ‘Marcus Wareing'. We're talking about a man who created this wonderful building, as well as many others, which is something I can never compete with. The goal is to help enhance that, not outshine it."

Such humility is rare enough in the culinary world, but it pales into insignificance when Wareing comes to discuss how the project came about and his role in driving its development. Chantelle Nicholson, a long-serving lieutenant who was formerly senior sous chef and operations manager for Marcus Wareing at The Berkeley, has been installed as general manager, entrusted by her boss to get on with developing the menu concept over the past year.

"Finding a new property wasn't really something that was on my mind," he begins, "but one day an email arrived in my inbox and pricked my interest. By then, Chantelle had been working for me for over six years and I knew the time might soon come when she started looking to move on. I couldn't keep her here forever and she needed a new challenge, so the two of us, along with my wife, who is also my partner, went along to take a look. We all walked away saying the same thing: this was an extraordinary opportunity that might never come our way again. The ball started rolling from there: we bid, won and then it was full steam ahead."

Nicholson was pulled out of the Berkeley and undertook extensive research and concept development. Wareing claims to have had no idea what she was going to present him with until the day they sat down to go through the fruits of her labours, but was clearly extremely impressed by what he saw. "I wanted to eat everything," he exclaims.

Wareing has played his part in developing the menu further - "helping to guide it to where I think it should be" - but repeatedly stresses that Nicholson and her team deserve the lion's share of the credit. If this is empire building, it is most certainly of a benevolent rather than totalitarian nature.

"I want it to be alive," he explains, "hustle, bustle, loud conversations, music and laughter."

"If no one ever associates my name with the Gilbert Scott I couldn't care less," he says. "There's already one restaurant that bears my name and it's given me everything and more that I've ever wanted. This is about other people now. Give someone a restaurant and dictate to them exactly what they are going to do with it; I guarantee that somewhere down the line they'll look back and feel little part of any success. It's not their creation; it's yours. Some people want to be dictated to and I can certainly do that, but you have to enable those who want more to be creative. I don't want people as good as Chantelle to go off and work for someone else, but in order to stop them, you have to provide a reason to stay."

Some might interpret this as a sly dig at a rather more authoritarian leader from Wareing's recent past, but the sentiment is clearly heartfelt - one need only look at the investment required to make it happen to appreciate that. Wareing claims that it will require future Nicholsons forcing his hand if we are to see any further projects, but is keeping his cards close to his chest for now.

And if he is unwilling to take too much credit for the food, the chef can at least claim some recognition for what he hopes will be the "buzz" of the place. "I want it to be alive," he explains, "hustle, bustle, loud conversations, music and laughter. We have a 54-seat bar that will be serving cocktails to lots of people making plenty of noise. This cannot be a stuffy establishment, the room does not lend itself to that, and I want to see people enjoying themselves."

"People" is a theme Wareing returns to time and again. Sitting atop St Pancras station, and neighboured by two other major rail hubs, Euston and King's Cross, this is a site that is teeming with life. It is not an area he knew well prior to embarking on the project - the notoriously rough-around-the-edges N1 is, after all, an unlikely postcode for a two-starred chef - but the vibrancy of his new locale has helped drive the overall vision. 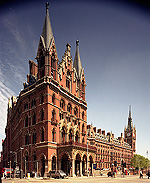 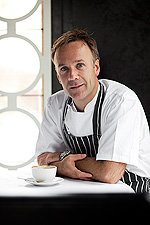 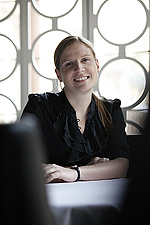