Now in its 40th edition, Host Milan has established itself as the leader in foodservice, retail, mass distribution channel and hotel industries. Following a record-breaking 2015, plans are already under way for making next year's event even bigger and better.

The wheels of the machine that is organising Host 2017 are well and truly turning, and promotional activities are under way, with scouting activities to find the best buyers from all five continents already in progress.

And the results of the work done, at home and abroad, are now being seen. The fact that 43% of the over 700 firms that have signed up for Host 2017 will be arriving from outside Italy, from no fewer than 37 countries around the world, has not gone unnoticed. 60,383 of the 150,968 visitors in 2015 were drawn from overseas, a growth of 17% on 2013 levels, but efforts continue apace to establish Host as the most international of hospitality trade shows.

Tradition and geographical proximity mean that 87% of firms that have signed up will be from Europe, including an impressive 18% from Germany and 9% from France, and two other 'hotspots' on the international marketplace will be represented, suggesting that an even more exciting and international edition lies in store.

Eight firms out of 100 will be from the Middle East and Asia. This is an interesting ratio, because the catering and hotel industry in the Middle East is booming right now, with many business opportunities for firms from all sectors relating to food and hospitality. Even more so if they have been 'Made in Italy', given Italy's generally recognised level of excellence and quality.

In recent years, the United Arab Emirates has been making huge efforts to expand tourism, with annual growth rates for hotel bed availability standing at 7%, and over 11,000 restaurants now operating in the country. In 2015-17, it is forecast that 140 hotels will be built, bringing the total to 750 and taking the number of available rooms to upwards of 114,000 compared with the 84,500 currently on offer.

And this is why Host is investing in the Middle East and has already begun the process of selecting the best buyers to bring to Milan in order to increase the many business opportunities for firms. And there is also great interest now in Iran, now that the US-imposed sanctions have been lifted and the country can once again trade with Western markets.

Look to the west

One major Western market, the US, is experiencing a significant growth in catering, with new formats and chains that quite literally cater to recent developments in eating and drinking habits, covering health issues including vegan, which is all the rage in New York at the moment. The country is already well represented at Host: 7% of firms that will exhibit at Host 2017 are from the US.

This is indicative of the fact that there has been a two-figure percentage growth in exports from Italy to the North American market year on year since 2010, with a 22% growth in the period January to October 2015 compared with the same period of the previous year. Meanwhile, ANIMA data provides more information on the sectors of specific interest to Host. In the first six months of 2015, exports of products manufactured by Italy's mechanical industry to North America were up 14% on 2014, which makes that part of the world the most attractive to Italy at the current time.

The very latest trends and fashions do indeed come from the US and turn up sooner or later in the world's big cities, from Berlin to Tokyo. But even the Americans, just like those arriving from other continents, view Milan as a must for doing business, not just with Italian firms that have always led the way in food and catering, but also with buyers and visitors from all over the world, especially from Europe and the Middle East. 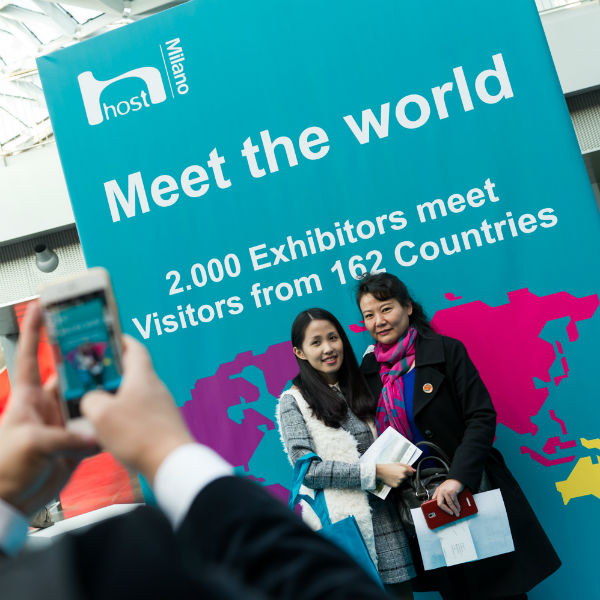 Host Milan has become a premier event in the hotel industry.